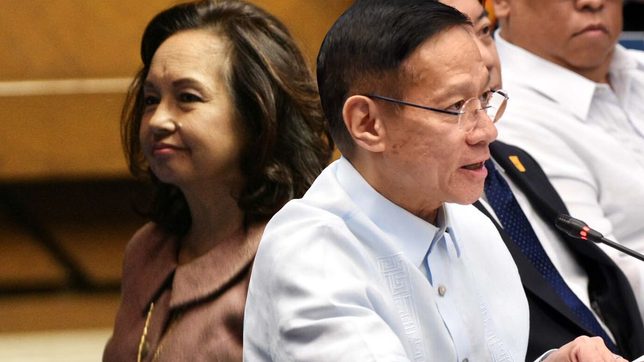 Facebook Twitter Copy URL
Copied
The 'Plan 5 Million' health cards were used as a political tool ahead of the May 2004 elections, claims a PhilHealth official from Davao City

The Philippine Health Insurance Corporation lost billions of pesos to a health card scheme of Health Secretary Francisco Duque III when he led the national insurer during the administration of Gloria Macapagal Arroyo, a PhilHealth official told a Senate panel on Tuesday, August 18.

According to Dennis Adre, PhilHealth Davao regional vice president, Duque, as PhilHealth president and CEO, launched the so-called “Plan 5 Million” health card project in 2004, shortly before the presidential elections where Arroyo was a candidate.

“Dr Duque ordered us then to distribute 5 million PhilHealth cards, which corresponded to the 5 million lead [survey] votes of the late Fernando Poe Jr against [Arroyo],” Adre said during the Senate’s 3rd hearing of its legislative probe into alleged massive corruption in the state insurer.

Presidents are only allowed a single term in the Philippines, but Arroyo, then vice president, assumed the presidency when Joseph Estrada was ousted, making her eligible to run for a full term as president.

In pre-election surveys at the time, Poe, a hugely popular film star fondly called “FPJ” by his fans, led the presidential race with about 5 million votes ahead of Arroyo.

“These free PhilHealth cards were to be distributed to the perceived political allies nationwide during the election period to offset the 5-million lead of the late FPJ in the surveys,” Adre said. 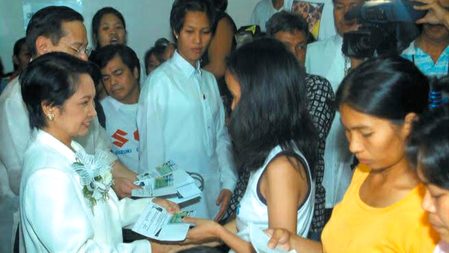 Arroyo won that election, but was afterwards hounded by allegations of cheating. Poe, whom some alleged to have been the real winner, died months later, in December 2004.

Before the May 2004 polls, Duque had specific instructions not to give any of the PhilHealth cards to then-Davao City Mayor Rodrigo Duterte, Adre claimed.

“One of the specific instances that I recall was the instruction not to give then-Mayor Duterte his share of the cards because Mayor Duterte [did] not belong to their party,” Adre said.

Before the PhilHealth cards were set for release, Duque allegedly summoned the PhilHealth regional vice presidents to a meeting in the central office in Metro Manila to explain to them how he wanted the distribution to go.

According to Adre, he questioned the plan to distribute the cards for free, and Duterte’s exclusion from the recipients. Adre had put his concerns in writing, which he said made Duque upset.

“Ang tugon po niya, actually nagalit po siya dahil bakit daw isinulat ko, at incriminating daw po ‘yon (His answer was, actually he got upset because why did I have to put it in writing as that was incriminating),” Adre recalled his exchange with Duque in the meeting before the May 2004 polls.

In the end, Duque won and the PhilHealth cards were rolled out. This, according to Adre, was the start of PhilHealth’s financial woes.

“To this day, the said 5 milllion PhilHealth cards amounting to billions of pesos has yet to be fully paid,” said Adre.

The state insurer lost money in unpaid premiums, which “the civil society organization was supposed to pay,” he added, without mentioning the name of the organization.

“And that was the first time that the financial statement of PhilHealth had been window-dressed,” Adre said. “It started during 2004 because they had to make up for the losses that were incurred for non-payment of premiums during Plan 5 Million.”

Senator Grace Poe, daughter of the deceased movie star, noted how a government institution was used for selfish gain.

(That doesn’t seem right…. Even if it wasn’t in the plan, they just gave out cards like that…so they can get ahead. It’s like you were buying votes in that way, right?)

Duque “strongly denied” the allegation that the program was used as a tool for political gain.

“Excuse me. I’m sorry. The 5 million [cards were] not in connection with the allegation of Mr Dennis Adre, but the 5 million [cards] were distributed based on the executive order of President Arroyo, and so there’s no correlation between the PhilHealth program and the elections,” Duque told the Senate panel.

Cases filed against Duque in connection with the issue – with the Office of the Ombudsman and the Commission on Elections – have been dismissed, he said.

During Tuesday’s hearing, PhilHealth board member Alejandro Cabading, an accountant by profession, gave examples of how he found PhilHealth’s financial statements to be “manipulated.”

Cabading is one of the whistleblowers whose allegations of rampant corruption in PhilHealth prompted the Senate investigations.

PhilHealth senior vice president and fund management chief Renato Limsiaco Jr and corporate secretary Jonathan Mangaoang did not put issues in the financial statements on the agenda of board meetings, even after the Commission on Audit flagged them, Cabading said.

Cabading said he had to nag Limsiaco and Mangaoang to present the financial statements to the board.

Senate President Vicente Sotto III asked Cabading why he thought Limsiaco or any PhilHealth executive would be reluctant to show the board the financial statements.

The growing list of allegations of irregularity and corruption are revealing the existence of factions among PhilHealth officials, the senators said. During the Senate hearings, those implicated in the allegations accused their accusers of being members of a “mafia” out to discredit the PhilHealth leadership.

Witnesses including Cabading and Adre hit back, saying all they want is to rid the state health insurer of corruption.

Adre was among several witnesses summoned by the Senate in a similar probe into PhilHealth anomalies in mid-2019. The senators noted these investigations were becoming a “yearly tradition.”

During Senate hearings on August 4 and 11, PhilHealth senior vice president for legal affairs Rodolfo del Rosario Jr accused the witnesses from 2019, including Adre, of being part of the alleged “mafia” responsible for rampant fraud within the state insurer.

Del Rosario had been facing tough questioning from the senators, who said he did not appear to be taking action against piles of fraud cases pending in his office.

On Tuesday, Adre “vehemently and categorically” refuted Del Rosario’s accusations, saying he and his fellow PhilHealth officers in Mindanao have been “anti-fraud crusaders.”

Adre claimed that the PhilHealth top leadership’s way of getting back at their perceived enemies is to reassign them, uprooting them from their offices and taking them away from what they had been prying into.

Adre was reassigned to the PhilHealth central office under president and CEO Ricardo Morales in September 2019, and has been on “floating status” since then, he told the Senate panel. – Rappler.com