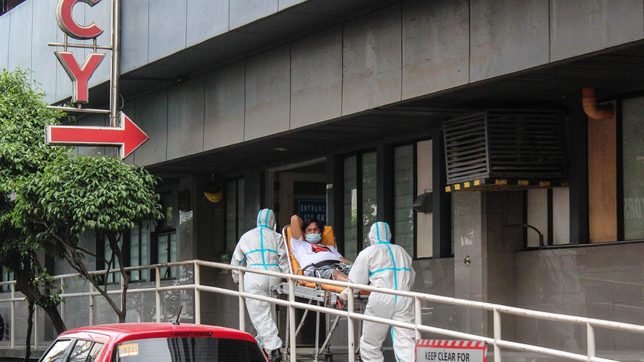 EMERGENCY. An infected patient is carried to the emergency room by fully-equipped frontliners at the Cebu Doctors’ University Hospital

Cebu City is facing its worst surge since the beginning of the coronavirus outbreak in 2020.

Acting Mayor Michael Rama released Executive Order (EO) 137 on Saturday, August 14, to implement stricter protocols in an effort to slow down the pace of transmissions in the city – assumed to be driven by the more infectious Delta variant of COVID-19.

Though it still considered under modified enhance community quarantine (MECQ), the city is now under stricter rules akin to the last lockdown in August 2020.

“The rules (are already) put in place (and) the police and force multipliers have been briefed and instructed (to enforce them) to the teeth. Violations will carry you under the pain of penalty,” Rama said in a Facebook post.

Almost all COVID-19 wards in the city are already occupied, according to the latest data from the Department of Health (DOH) Central Visayas. Meanwhile only 83,171 residents of Cebu City – or 12% of the 645,828 eligible residents – have been fully vaccinated as of Thursday, August 12.

Task Force Puyo was established by the local government to implement the policies under this heightened classification.

This special task force is chaired by Police Colonel Josefino Ligan, director of the Cebu City Police Office, and the following agencies and offices:

The following businesses are not allowed to operate during MECQ:

Who can leave their residence?

The mandatory stay-at-home order does not apply to authorized persons outside of residence (APORs). These include:

Everyone else may leave their homes to access essential goods and services from permitted establishments, for work in authorized offices, or for humanitarian reasons.

The following documents are required to prove that a resident is an APOR:

While APORs have to show their certificate of employment and company ID if they are stopped by authorities, the EO does not mention if those leaving their homes to purchase essential goods are required to carry a quarantine pass.

Rappler reached out to Rama for clarification, but he has not responded as of this posting.

Curfew will start from 10 pm until 4 am the following, day which is also applicable to all establishments and offices permitted to operate during the MECQ period.

Residents violating the mandatory stay-at-home order or simply seen staying outside their residence “without ample justification or reason (will) be apprehended and may be prosecuted in the proper courts.”

Cebu City will coordinate with the provincial government and the cities of Talisay, Lapu-Lapu, and Mandaue on border control and management protocols.

“Through the police, we shall coordinate with Talisay City and Mandaue City, and Balamban in the uplands for an inter-LGU perimeter manning protocol to ensure that movement of people are authorized or allowed,” Rama said.

Task Force Puyo members were ordered by the city to conduct random inspections and foot patrols.

All public utility vehicles (PUV) are allowed to operate within the city while private vehicles need to operate subject to the guidelines provided by City Ordinance No. 2628, the Department of Transportation (DOTr), and other laws.

The EO orders public utility buses to open windows, while vehicles that cannot should install air purifiers with high-efficiency particulate air (HEPA) filters and ionizers with a capacity proportional to the area of the vehicle, or else reduce passenger capacity.

Public transportation operators have 72 hours to comply with the ventilation requirements.

Gatherings that are essential for the provision of health services, government services, or humanitarian activities, such as public vaccinations, are allowed.

Religious gatherings of up to 10% of the venue capacity are also allowed.

While funerals and wakes are permitted, only immediate family members are allowed to attend.

See the executive order for the full list of restrictions: