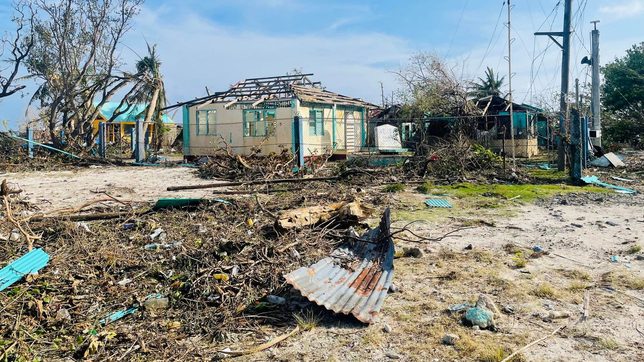 ODETTE. Damaged structures due to typhoon Rai are seen onu00a0Pag-asa Island on December 21, 2021.

MANILA, Philippines – The deadly typhoon that killed hundreds in the Philippines also damaged dozens of homes and government infrastructure on the country’s biggest, strategically most important outpost in the South China Sea, including a newly built coast guard station.

Typhoon Odette (Rai), which left nearly 400 people dead and displaced hundreds of thousands, hit the remote Pag-asa Island (Thitu), one of nine features the Philippines occupies in the Spratly archipelago, just as it was undergoing an upgrade to facilities including the repair of a runway.

The island is located more than 300 miles (483 kilometers) from the Philippines.

“As soon as possible, we will rebuild the coast guard station,” Philippine Coast Guard (PCG) Spokesperson Armando Balilo told Reuters. “We need Pag-asa Island, it is critical to our country,” he said using the local name of the island.

The island’s population of just 194 as of July has a strategic purpose for Manila – preserving a Philippine claim of sovereignty in the face of a resurgent China.

China claims sovereignty over the Spratlys, but Brunei, Malaysia, the Philippines, Taiwan, and Vietnam all have competing claims for some or all of the islands.

Coast guard official Balilo said the island’s residents were safe, and the coast guard’s priority was to send relief supplies.

Images shared by the coast guard showed the trail of damage left behind by Typhoon Odette, from uprooted trees to the roofs and walls of homes being torn off. “Only the evacuation centre was left standing, but the windows were also busted,” Balilo said.

Typhoon Odette, which struck the Philippines on December 16, was the strongest typhoon to hit the archipelago this year. It has affected 1.8 million and displaced 630,000 residents, the UN Office for the Coordination of Humanitarian Affairs said.

It revived memories in the Philippines of the devastation brought in 2013 by Typhoon Haiyan, one of the most powerful tropical cyclones ever recorded, which killed 6,300.

Balilo said the coast guard managed to reach Dinagat island, one of the southeastern provinces first pounded by the typhoon, on Tuesday, to deliver desperately needed relief supplies after residents had been pleading for food, water and shelter. – Rappler.com