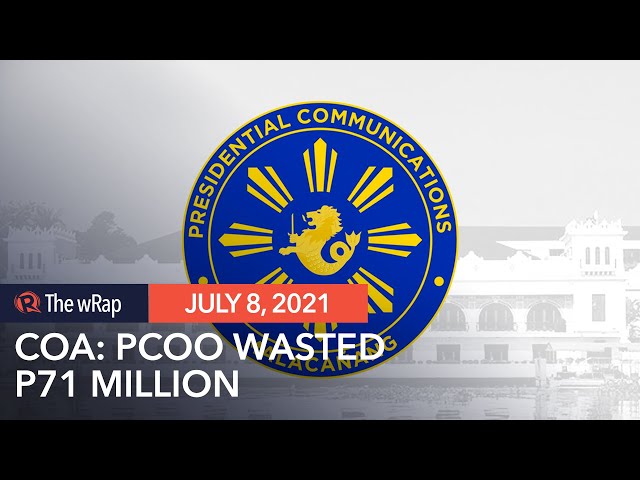 The Commission on Audit (COA) flagged the “massive” and “unrestricted” hiring of contractual workers by the Presidential Communications Operations Office (PCOO), saying it led to unnecessary expenses totaling P71 million.

In its 2020 annual audit report, COA said the agency hired 375 contract of service (COS) personnel, 260% more than the number of regular personnel. The office in the PCOO that hired the biggest portion of these contractuals – 70 – was the office of PCOO Secretary Martin Andanar himself.

It came to a point that the COS personnel comprised 70% of the entire agency’s workforce.

COA identified the following irregularities with how PCOO hired contractuals:

For the COA, the hiring of these COS personnel wasted P71 million “which could have been used for other programs and projects of the government.”

PCOO tried to justify their hiring of COS personnel by attributing it to the “need to hire additional personnel in order to augment the lack of manpower of the agency.”

The office cited the COVID-19 pandemic as yet another critical factor.

“The delivery of the services of the PCOO especially during the time of the pandemic is considered very crucial and the hiring of COS is essential in order not to hamper the delivery of its basic services,” it said in the COA report.

Nevertheless, the PCOO said it is enforcing a “budget cap” per office to manage the hiring of COS personnel and is requiring offices to submit an organizational structure to ensure the contractuals it hires are not redundant.

The agency also issued Office Order No. 0031 series of 2020 that requires its offices to provide a justification for hiring a contractual worker, job description, and funding source for their salary, among other things.

“PCOO engaged the services of a private lawyer without the written conformity and acquiescence of the Solicitor General and the written concurrence of the Commission, and despite having a legal office, in violation of COA Circular No. 95-011 dated December 4, 1995, thus related expenditures were considered irregular and unnecessary,” said COA.

Jore’s contract of service identified her as Attorney II under the office of PCOO Undersecretary for Administration and Legal Affairs Marvin Gatpayat.

Jore’s job description included acting as prosecutor for PCOO in criminal and administrative cases, reviewing legal documents and issuances, providing legal opinion, draft contracts and memoranda of agreements, among others.

She was given a monthly salary of P42,159. In total, the agency paid her P105,397.50. COA recommended that the PCOO officials who approved her hiring, approved payments to her, and certified to the necessity and legality of hiring her be made to refund her salaries.

The PCOO defended their decision to hire Jore, saying she merely “provided assistance” to Gatpayat’s office in reviewing legal documents and that she never represented the agency as legal counsel in any criminal or administrative case.

They said engaging Jore’s services was “appropriate, urgent, and necessary in view of the lack of plantilla legal positions under this Office.”

But the audit team, in its rejoinder, stood by its conclusion that the hiring of Jore was irregular. – Rappler.com