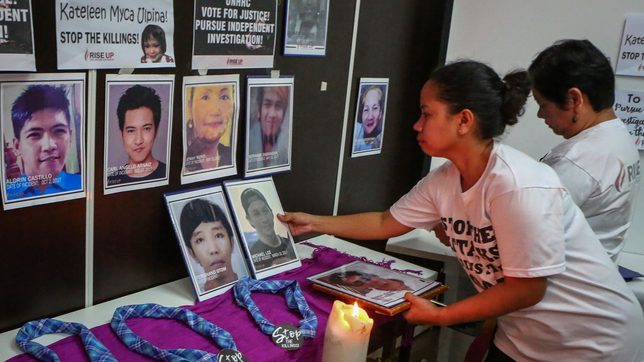 DRUG WAR DEATHS. Families of victims of drug-related extrajudicial killings and human rights advocates joined a mass at the Commissio on Human Rights (CHR) headquarters in Quezon City to pray for the positive outcome of the deliberations for the proposed independent investigation by members of the United Nations Human Rights Council this coming July 12. July 9, 2019.

Facebook Twitter Copy URL
Copied
The justice secretary says the panel will ‘seek out’ witnesses, although relatives of victims say they were never approached

Justice Secretary Menardo Guevarra said on Tuesday, June 22, that it will be difficult to file complaints against policemen who killed suspects in the bloody drug war if witnesses do not come forward – yet the process of getting witnesses to come on board remain unclear.

“The cooperation of the victims’ families and their witnesses is crucial. Unless they come forward and testify, it would be extremely difficult for our investigating agencies to build up cases against erring law enforcers,” Guevarra said.

It was the justice secretary’s response to the statement of United Nations (UN) High Commissioner for Human Rights Michelle Bachelet that the Department of Justice (DOJ) must produce “meaningful results.”

But the process for witnesses remains undefined because Rise Up, a group of relatives of Filipinos who were killed in the drug war, said they were never approached by the DOJ.

How do witnesses come forward?

Rise Up has looked into 200 cases of alleged extrajudicial killings (EJKs) in the drug war, but was able to do case buildups for only 20 of those. And of those 20, there have been six complaints filed, two of which had resulted in approval of charges filed against policemen. (READ: Ombudsman finds only homicide, not murder, in 2016 drug war double kill)

Guevarra earlier said that the review does not cover cases where there were already complaints filed because the “ultimate purpose of the review is to determine any criminal liability and file the appropriate complaint.”

Guevarra repeated that on Tuesday, saying “nothing prevents the families of victims and their witnesses from filing their complaints directly with the DOJ or the Office of the Ombudsman without waiting for the results of the panel review.”

Asked again on Tuesday if the DOJ has a mechanism for the witnesses in cases where there are no complaints filed yet – if there is an email, number or hotline, Guevarra said: “The panel will seek them out if there are sufficient grounds to proceed to a criminal investigation in any case reviewed by the panel.”

Guevarra no longer responded to the question whether there had already been a case where a witness sought by the panel did not cooperate.

A year after opening the review, the PNP entered into a data-sharing mechanism with the DOJ for its drug war death records, but only to 51 cases for now because President Rodrigo Duterte’s concern about national security narrowed what was supposed to be full access.

The UN and the ICC

The DOJ is yet to show a single complaint filed as a result of the review, but Guevarra told the UN there were existing 87 criminal cases against law enforcement agents. The DOJ could not clarify how many of those are still with prosecutors and how many have been filed in court.

“The DOJ review panel will go where the evidence available will lead it,” said Guevarra.

Several human rights groups, both local and international, have put the pressure on the UNHRC to take stronger action on the Philippine drug war, so it could reinforce a potential investigation by the International Criminal Court (ICC).

Now retired prosecutor Fatou Bensouda left a request with the ICC’s pre-trial chamber to open the crucial phase of investigation into the drug war, saying there was a pattern of concealment, violent statements, and presence of similar actors that indicate Philippine officials “planned and ordered” EJKs as a state policy.

“Unlike national courts that can be intimidated by those who wield state power, the ICC can best guarantee a fair trial for all concerned, victims and accused alike,” the Free Legal Assistance Group (FLAG), which filed one of the two Philippine Supreme Court petitions to strike down the drug war as unconstitutional, said in a statement.

“Witnesses will be able to come forward without fearing for their lives, the rights of the accused will be fully protected, and the judges will be able to render judgment fairly, impartially, and free from political influences,” said FLAG.