Philippines allows all adults to receive a COVID-19 booster shot 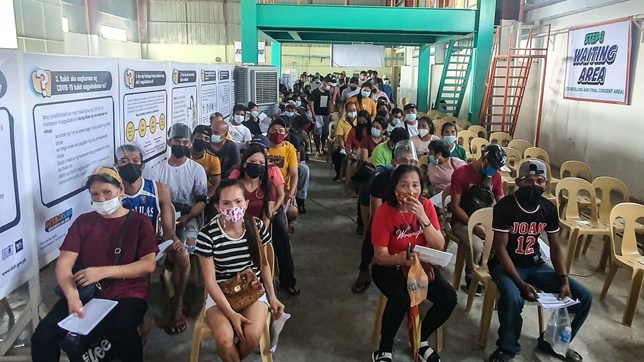 VACCINE PROGRAM. Thousand of Imus residents avail COVID-19 vaccines during the start of the 3-day National Vaccination Day, on November 29, 2021, at a mall in Imus, Cavite.

Facebook Twitter Copy URL
Copied
All adults fully vaccinated at least six months ago will be able to get a booster shot as soon as December 3, 2021. Those who received the J&J vaccine can get boosted at least 3 months after they were vaccinated.

MANILA, Philippines – Philippine health officials have authorized the rollout of coronavirus booster shots for everyone aged 18 and older, opening up eligibility to millions of more fully vaccinated adults.

The Department of Health (DOH) announced this on Thursday, December 2, a day after the Food and Drug Administration (FDA) granted emergency approval to Pfizer, Moderna, and AstraZeneca to be used as an additional dose.

The move simplifies who in the country will be allowed to get a booster shot, after health officials initially stuck to a phased approach that began with health workers and seniors or those aged 60 and above.

On Wednesday, December 1, FDA Director General Eric Domingo said the expansion was approved based on the assessment of benefits and risks – similar to what the United States Centers for Disease Control and Prevention had done.

The government’s decision to allow booster shots for all adults comes as some 33% of the Philippine population have been fully vaccinated as of November 30.

Vaccine czar Carlito Galvez Jr. said opening the booster drive to anyone 18 or older was justified because supply was no longer an issue for the country. “We have more than enough,” he said.

A total of 217 million COVID-19 vaccine doses were expected in 2021 from both donations and purchased orders. Of this amount, about 144 million have been delivered as of the end of November.

With more doses expected to be shipped in the coming days, health officials were also bullish about authorizing younger children or those aged 5 to 11 to receive the vaccine. Galvez said that the government also bought an additional 20 million doses of the Pfizer vaccine for use in both the booster rollout and pediatric vaccinations.

Prior to the DOH approval of giving boosters to all adults, experts guiding the government’s vaccine rollout warned against prematurely rolling out additional shots, which could exacerbate existing inequities in the health system.

To address this, health experts had recommended allowing boosters for remaining priority groups – including persons with comorbidites (A3), economic frontliners (A4), and the indigent population (A5) – only when at least 50% of each group has been fully vaccinated and at least 70% of the target population in “hotspot regions” are also covered with two doses.

It was not immediately clear if the provision would still stand or how far along the DOH was in meeting these requirements.

But with the pandemic still ongoing and COVID-19 still around, health experts have urged officials to ensure that the push for boosters would not come at the expense of efforts to  reach out to millions of Filipinos who had yet to receive a shot at all.

The DOH announced the approval COVID-19 boosters for all adults days after the World Health Organization classified the B.1.1.529 variant detected in South Africa as a COVID-19 “variant of concern,” and named it Omicron. – Rappler.com