In Russia-Ukraine crisis, PH’s main concern is safety of over 300 OFWs MANILA, Philippines – As tensions between Russia and Ukraine continue to escalate, the Philippine government said on Wednesday, February 23, that its “chief concern” is the safety of overseas Filipino workers (OFWs) who may be affected by the conflict.

“Our chief and singular concern is to take out of harm’s way our fellow Filipinos in Ukraine and bringing them to the nearest places of safety by the fastest possible way,” Foreign Secretary Teodoro Locsin Jr. said.

The Department of Foreign Affairs (DFA) earlier counted over 300 Filipinos living in Ukraine. Locsin said efforts are underway to repatriate workers who want to return to the Philippines.

The Philippine embassy in Warsaw, Poland, which oversees the situation of Filipinos in Ukraine, earlier sent a consular team to Lviv, a western Ukrainian town close to Poland’s border, last Thursday, February 17, to establish an emergency contact base.

In coordination with the Philippine honorary consulate general in Kyiv, the presence of a consular team would ensure “immediate assistance” to OFWs, the DFA said.

Philippine officials have since met with Filipino groups who temporarily relocated to the Lviv and Ivano-Frankivsk areas from Kyiv as a precautionary measure. At least six other Filipinos had returned to the Philippines as of Friday, February 18.

Filipinos in Ukraine who need repatriation assistance were advised to contact the Philippine embassy in Warsaw through the following:

Tensions between Russia and Ukraine have intensified in recent days as Russian President Vladimir Putin ordered the deployment of troops to two breakaway regions in eastern Ukraine, after recognizing them as independent on Monday, February 21. Putin’s move accelerated a crisis the West fears could unleash a major war.

The United States, European Union, and Britain condemned the move and announced new sanctions against Russia. 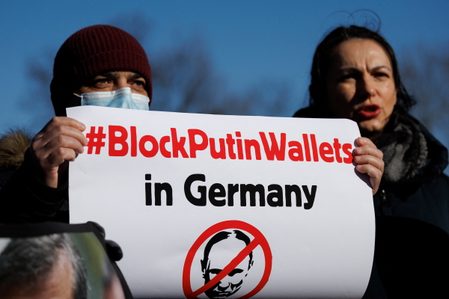 On Monday, former Philippine foreign secretary Albert del Rosario called on Russia to respect Ukraine’s sovereignty and abide by international law. He cautioned that events in the Baltics would have “consequential implications” in Asia.

“Sovereignty is a core norm of that community, and rule of law is the tie that binds all of us in that unity. A violation in one part of the body causes pain on another. We are all intertwined in that one precarious community,” Del Rosario said.

The Philippines’ former top diplomat then warned against staying silent on Russia’s actions, which could undermine the rule of law that “arguably preserved world peace since the last world war.”

“Keeping a deliberate blind eye on these violations or threats to fundamental principles of international law including respect for the sovereignty of another, regardless of wherever they occur…will eventually reduce that community into a precarious association of the mighty and powerful governed by the law of the jungle where might is right. In this scenario, small power-states would have no relevance,” Del Rosario said. – with reports from Reuters/Rappler.com