After almost two years of school closure due to the COVID-19 pandemic, the Philippines begins limited face-to-face classes in select areas on Monday, November 15.

A total of 100 public schools join the pilot run, which will run for two months, as approved by President Rodrigo Duterte. Meanwhile, 30 private schools will start limited in-person classes a week later, on November 22.

There are about 48,000 public schools in the country.

“Almost all participating schools are ready for the pilot study on November 15, 2021. On the average, most of them are basically on a 90% above preparation,” Education Assistant Secretary Malcolm Garma said in a press briefing on November 9, a week before the start of the pilot run.

Meanwhile, several groups called for more health protection measures to build the confidence of students and teachers in a safe school reopening. The groups, composed of education and health advocates, listed five demands that should be met by the government to ensure the safety of students, parents, and teachers. Check their demands here.

Among the demands is a weekly COVID-19 antigen testing to screen students and teachers participating in the in-person classes. This, after the Department of Education (DepEd) said it would not undergo COVID-19 testing.

Education officials said COVID-19 testing, especially the process of swabbing for samples, would be traumatic for young students. (READ: No COVID-19 testing for students in face-to-face classes – DepEd)

While the process of swabbing can be painful or uncomfortable for many, the Philippines offers another process of COVID-19 testing that is easier and faster – the saliva-based COVID-19 testing. It has been approved by the health department for use since January 2021.

President Duterte has given the go signal to allow more schools to join the pilot run. The DepEd said it would release the list of additional schools after their validation.

The agency added that it also received appeals from several local government units, including Metro Manila, to include their schools in the pilot run.

The government’s pandemic response had been assailed, with critics saying that the school closure in the country reflected misplaced priorities and failed management of the health crisis.

Follow Rappler’s live updates on the start of limited face-to-face classes in the link below. 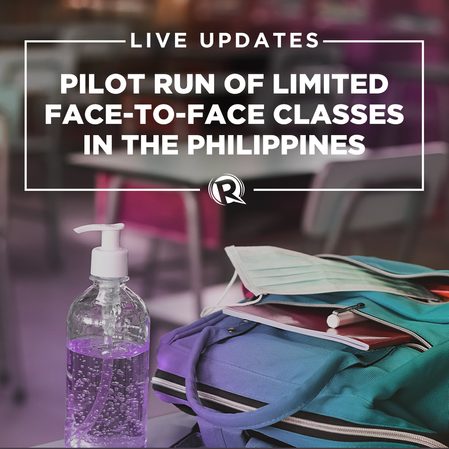