Terminal: The constant agony of commuting amid the pandemic 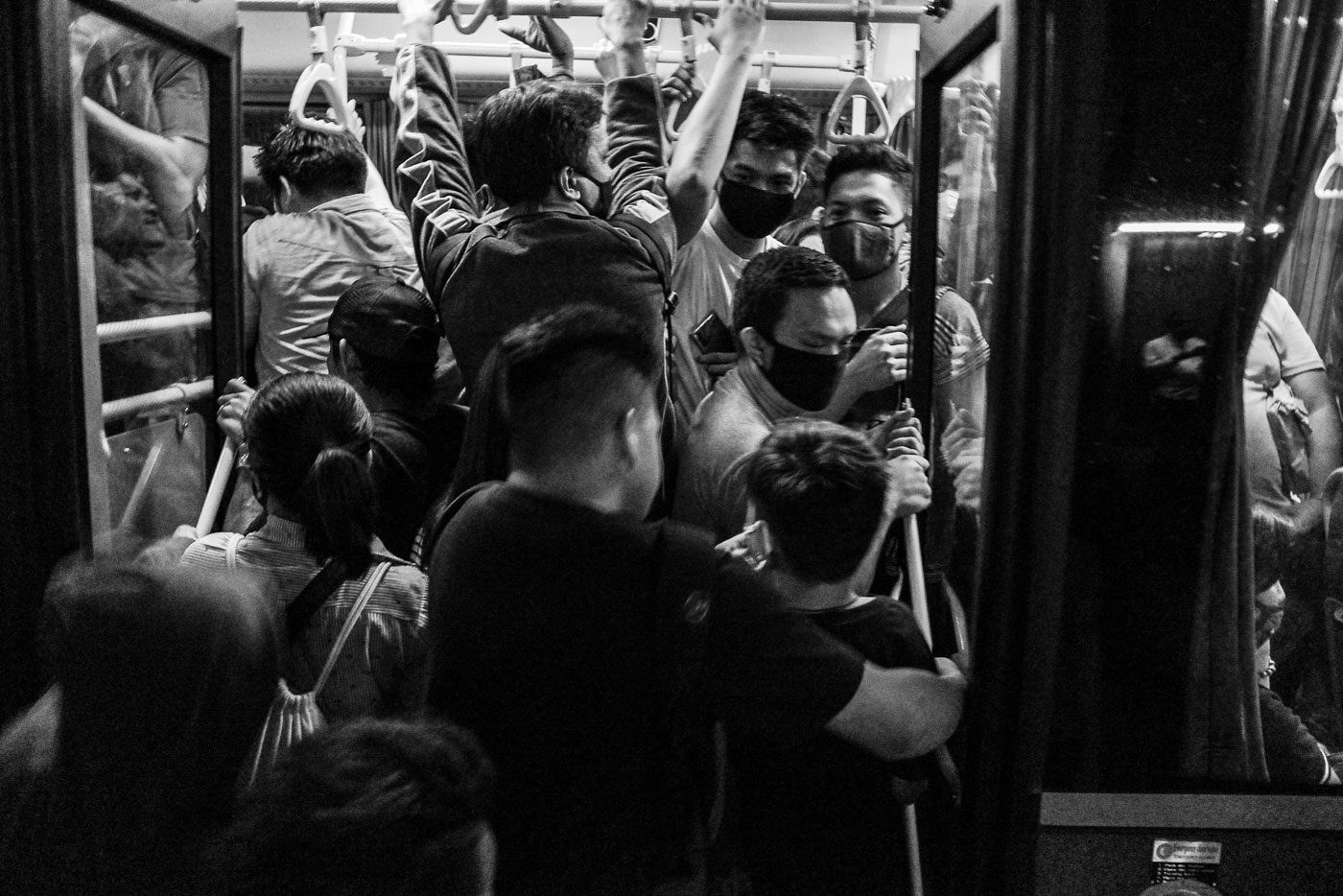 Facebook Twitter Copy URL
Copied
The daily commute of Filipinos, especially those who hail from Metro Manila, has always been a struggle, and it became even more inhumane with the varying degrees of mobility restrictions during lockdown
AS PUBLISHED BYPHILIPPINE CENTER FOR INVESTIGATIVE JOURNALISM

The photo essay features one of the prevalent illnesses in the Philippines even before COVID-19 struck: commuting. The series of photos show the all-too familiar battle the ordinary Filipino faces each day.

“Commuting” is synonymous to the word “agony” for 13 million residents of Metro Manila, the nation’s capital region. Going to the workplace from home and back has been a constant source of distress for millions of Filipinos in one of Asia’s most congested metropolitan areas.

Filipinos are no stranger to the apocalyptic scenes of commuters struggling to get a ride on Metro Manila’s main thoroughfares. This includes enduring long hours of queues for public utility vehicles and trains that last well into the night, and the exhausting travel time in cramped buses and jeepneys crawling through heavy traffic.

In 2019, a well-known navigation app, Waze, named Metro Manila as one of the cities with the worst traffic in the world. A study conducted in 2017 by the Boston Consulting Group, commissioned by ride-hailing app Uber, showed that a commuter in Metro Manila spent 66 minutes in traffic every day, the third longest in Asia.

The heavy traffic has taken its toll on the physical and mental health of commuters.

Many are used to sacrificing hours of sleep to wake up very early to beat the rush hour “carmageddon.” Others have to walk long distances in unsafe areas to come to work on time or be home safe with their families. These are just a few of the typical ordeals a regular commuter has to endure every single day.

The COVID-19 pandemic has made the daily agony even worse.

Since March 2020, the Philippines has been placed under various levels of community quarantine, making the country’s lockdown the longest in the world. Abrupt restrictions on public transportation left commuters like headless chickens on the roads. Even healthcare workers, who play significant roles during a health crisis and use public transport regularly, were not spared.

As the lockdowns eased in the months that followed, buses, jeepneys, trains, and even tricycles were forced to adapt to the so-called “new normal.” Drivers were required to regularly sanitize their vehicles and install plastic barriers as part of health and safety precautions.

According to AltMobility PH, these measures have increased the cost of public transportation.

“Commuting is more expensive now across all public transport modes,” said Jedd Ugay, chief mobility officer of AltMobility PH. For instance, local governments have restricted tricycles to one passenger at a time. This means a passenger needs to pay more for a “special ride.”

While the new health protocols take into account the welfare of commuters amid the pandemic, the riding public now has to choose between safety or savings.

“For most people, public transport is their primary choice. Regardless of whatever state our transport system is currently in, people still need to undertake essential trips for essential purposes. It is inevitable,” Ugay added.

As Filipinos struggle to avoid the deadly coronavirus, they still have to contend with the agony of daily commuting, itself a malady that seems to have no cure in sight.