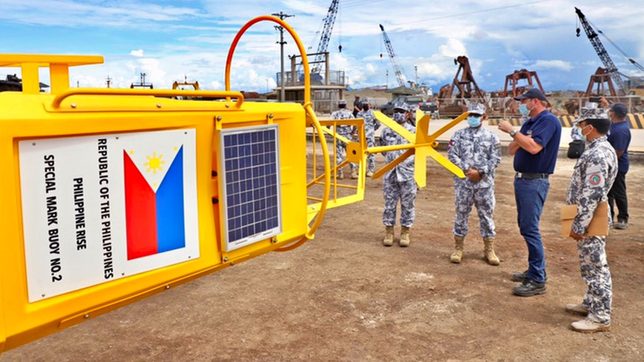 TERRITORY MARKERS. The Philippine Coast Guard is set to install buoys in the Philippine Rise (formerly Benham Rise) to mark the features as part of the exclusive economic zone of the Philippines on May 12.

Facebook Twitter Copy URL
Copied
(1st UPDATE) With the presence of the buoys, the Philippine Rise will be charted as a special protected zone says PCG

The Philippine Coast Guard (PCG) installed buoys in the Philippine Rise (Benham Rise) on Wednesday, May 12, to mark the features in the country’s eastern seaboard that are part of its exclusive economic zone.

The PCG installed the first three of 10 buoys in Philippine Rise situated 250 kilometers east of the northern coastline of Aurora province. The buoys were procured from the international marine aids company Mediterraneo Señales Maritimas in Valencia, Spain.

According to PCG Spokesperson Commodore Armand Balilo the country already has existing buoys in its seaboards but the 10 state-of-the-art buoys have more advanced technology.

With the buoys in place, the Philippine Rise on the eastern seaboard would be considered as a special protected zone, the PCG added. The buoys would also mark the designated exclusive food supply zone of the Philippines and would ensure safe navigation in the area.

The yellow-colored, 30-foot long buoys were equipped with modern marine technology to aid navigation lanterns and specialized mooring systems. These also have remote monitoring systems that use satellite technology that could transmit data from the location of the buoys to the PCG National Headquarters in Manila.

The Philippine Rise is a 13-million-hectare underwater maritime feature located near Aurora province. It is larger than Luzon island and considered as a part of the Philippines’ continental shelf.

In 2012, the United Nations Commission on the Limits of the Continental Shelf (UNCLCS) reaffirmed that the Philippines has the sole possession of the maritime features because it was part of the country’s continental shelf. – Rappler.com