Facebook Twitter Copy URL
Copied
In a joint statement with the IBP, the PNP says its leadership 'does not sanction or tolerate the use of unnecessary/unreasonable force'

Top officials of the Philippine National Police (PNP) and the Integrated Bar of the Philippines (IBP) met on Tuesday, March 16, to address the spike in killings of lawyers, prosecutors, and judges in the county in the past 5 years.

During the meeting, the groups said the PNP does not tolerate any unlawful actions of the police.

“The PNP leadership does not sanction or tolerate the use of unnecessary/unreasonable force; illegal/questionable methods, or abuse of authority in pursuing its mandate to enforce the law and maintain peace and order,” the PNP and IBP said in a joint statement.

According to the Free Legal Assistance Group (FLAG), the largest and oldest network of human rights lawyers in the county, there have been 61 lawyers killed since 2016, when Rodrigo Duterte became president. However, there were only 49 lawyers killed in the span of 44 years, from the time of late dictator Ferdinand Marcos to the presidency of Benigno “Noynoy” Aquino III.

In the 61 killings, 4 were perpetrated by policemen, according to FLAG.

The groups added that more rapid action in the justice system could solve the problem of killings.

“[We believe] that Justice Bilis (Quick Justice) is a key deterrent to criminality and will continue to encourage and enable its members to help move the wheels of justice in our country much faster,” said the groups.

Since 2016, there have been only 5 cases of lawyer killings that have reached the courts, according to the Department of Justice.

For the National Union of Peoples’ Lawyers (NUPL), the meeting between the IBP and PNP sent a confusing message.

“The optics might give confusing signals or messages. We look forward to being enlightened about the purpose, circumstances and outcome, and how it impacts on a lot of sensitive issues the parties are concerned about,” said NUPL president Edre Olalia.

On March 4, lawyer Angelo Karlo “AK” Guillen, one of the counsels in the dozens of anti-terror law petitions, was stabbed in the head and back by two unknown assailants in Iloilo City. The lawyer fortunately survived the assassination. 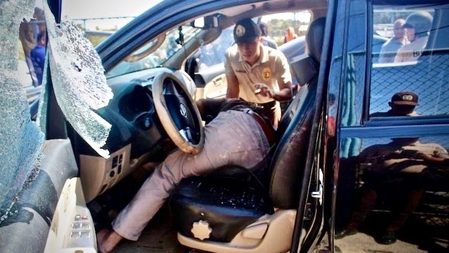 In the second week of March, the head of intelligence of the Calbayog City police in Northern Samar requested a local court for a list of lawyers allegedly representing communist groups.

The move, which was strongly criticized as “deplorable and alarming” and as enabling attacks against human rights lawyers, resulted in the immediate relief of the intel chief, Lieutenant Fernando Calabria Jr.

According to data from various sources analyzed by Rappler, there have been at least 110 legal professionals killed in the Philippines from 1977 to 2021. More than half of these killings occurred during the administration of President Duterte. – with reports from Lian Buan/Rappler.com