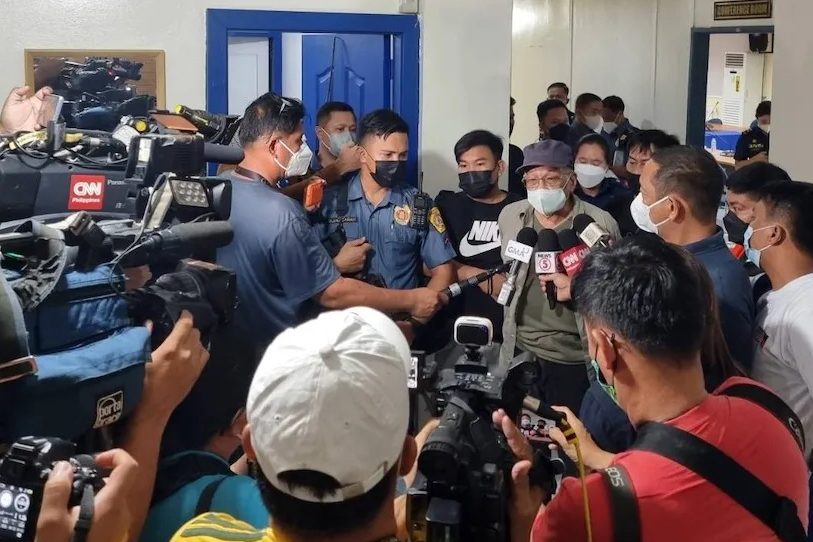 “Walden has just been arrested for cyber libel by officers of the QCPD. He is currently being taken to QC Police Station 8, P. Tuazon,” Doctolero said.

It was Davao City Regional Trial Court (RTC) Branch 10 Judge Retrina Espe Fuentes who issued the arrest warrant on Monday. Bello’s counsels said they will move for the suspension of proceedings at RTC 10 after Bello posts bail.

Bello faces two counts of cyber libel for which bail has been set at P48,000 each.

Bello’s camp filed a motion for reconsideration before the Davao prosecutor’s office but it was denied, Doctolero explained.

“The resolution for his indictment was released last June 9. We filed for a Motion for Reconsideration with the Prosecutors’ Office which was subsequently denied.”

In a message to reporters, Leody de Guzman’s team said the ex-presidential candidate and Bello’s running mate was headed to QCPD Station 8 to show support for Bello.

At the height of the campaign period early this year, Jefry Tupas, Vice President Sara Duterte’s former information officer, filed a cyber libel complaint against Bello. She is seeking P10 million in damages after Bello allegedly accused her on social media of being a drug addict and dealer.

In a petition for review filed on July 29, Bello’s camp argued that the position of Tupas in government “is very relevant” as the Facebook post would not have highlighted the drug raid if it weren’t for her being a public official.

The prosecutor’s dismissal of their argument that the post merely poses a question sets “a dangerous precedent,” the petition also pointed out.

“Just imagine the severe infringement on free speech that would ensue if our jurisdiction would limit what questions people can ask!” the petition said.

Bello’s camp also argued that the post was written by his communications team, not by the former vice presidential candidate himself, and that there is still no proof that he personally published it on Facebook.

“[Bello] does not even have administrator or moderator status in the said Facebook page,” it said.

Bello on Tuesday, August 9, condemned the “silly charge of cyberlibel posted by the camp of [Vice President] Sarah Duterte.”

“These people are mistaken if they think they can silence me and suppress my exercise of free speech,” he posted on Twitter. – With reports from Jodesz Gavilan/Rappler.com