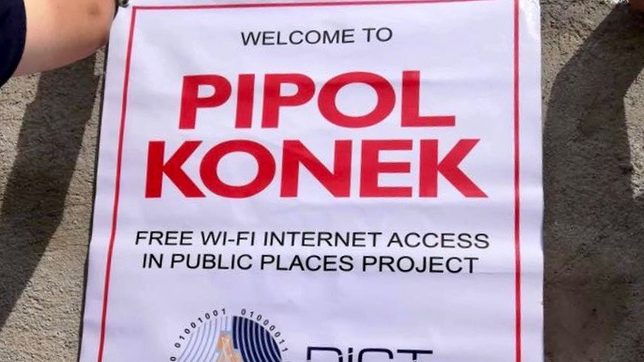 Facebook Twitter Copy URL
Copied
'Clearly, the elephant in the room is that the work relationship of Philcomsat with UNDP and Speedcast is the cause of the delay of the DICT-UNDP project,' former DICT undersecretary Eliseo Rio tells a House panel

The government has only installed 882 of the 6,000 public Wi-Fi connection points that it aims to set up by the end of 2022, the Department of Information and Communications Technology (DICT) told a House panel on Tuesday, May 25.

At a hearing of the House committee on good government and public accountability on the government’s Wi-Fi project, DICT Undersecretary Emmanuel Caintic said that as of May 2021, the project is only on the first of three phases.

PLDT was tapped to implement phase 3 of the project. The contract was awarded to the company in April 2021.

During the hearing, the DICT itself and lawmakers pointed out that most of Wi-Fi units installed during the first phase of the project provided internet connection that was “too slow,” or a maximum connection speed of 2 megabits per second.

The installation of free public Wi-Fi modems is part of the government’s Pipol Konek – Free Wi-Fi Internet Access in Public Places Project, which aims to provide internet access in public places such as schools, airports, public hospitals, and parks.

The Commission on Audit had flagged the DICT for its slow implementation of the project in its December 2020 audit report.

“Overall, there was a very slow implementation of the Free Wi-FI Program either through procurement contracts, engagement of the PITC and partnership with the UNDP (United Nations Development Programme),” the COA report said.

The designated installer of the Wi-Fi sites, the Philippine Communications Satellite Corporation (Philcomsat), raised many issues during the hearing.

To recall, the DICT partnered with the UNDP for Pipol Konek. The UNDP then partnered with Australia-based company Speedcast for its implementation, and Speedcast subcontracted Philcomsat for the on-site installment.

Philcomsat president Erlinda Bildner pointed to the UNDP and Speedcast as causes of delay. She said that Speedcast declared bankruptcy six months into the project, delaying the project by 11 months. She also cited the issue of undervaluation at Customs that warranted an internal investigation.

Bildner then blamed the UNDP for installment delays as it allegedly failed to vet the list of the first 3,000 installation sites.

Bildner said around 540 sites had no power source confirmation, “hundreds” of others had wrong addresses, and there were even sites with coordinates that pointed to “the middle of the ocean.”

Bildner added that they also encountered problems with other sites as some local government units (LGUs) wanted to change the installation address to areas they believed would benefit more constituents. Bildner said Philcomsat was supposed to be “installers” only, while the UNDP should have done the site surveys and ironed out these kinks with the LGUs.

She also said that they were further slowed down by the pandemic lockdowns in 2020.

Former DICT undersecretary Eliseo Rio, who was a resource person at the hearing, said, “Clearly, the elephant in the room is that the work relationship of Philcomsat with UNDP and Speedcast is the cause of the delay of the DICT-UNDP project.”

The UNDP did not send a representative to the hearing, while Speedcast only sent a position paper to the committee.

The House committee will hold another hearing on June 1, before the House adjourns. The committee chairman, DIWA Representative Michael Aglipay, said the committee will send a strongly-worded letter to the UNDP to appear in the next hearing. – Rappler.com