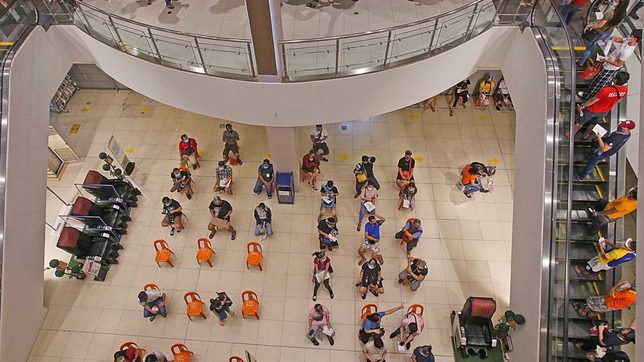 PRIORITY SECTOR. People under the A4 priority group queue from the ground up to the 4th floor of the Lucky China Town Mall in Binondo, Manila to get their COVID-19 vaccine on June 15, 2021.

Facebook Twitter Copy URL
Copied
The government’s target is only 70% of the actual population. The actual vaccination rate in Metro Manila is at around 59%.

A total of 8,331,665 people in Metro Manila have been fully vaccinated against COVID-19, Presidential Spokesperson Harry Roque said during his press briefing on Monday, October 25. This accounts for 85.22% of the government’s target population in the region.

Roque also said that 9,289,795 people in Metro Manila, or 95.02% of the target population, have been given their first dose. These figures are as of Sunday, October 24.

The vaccination rates are much lower if calculated using the actual population of the region.

Vaccinating 70% of the country’s population was earlier thought to be enough to reach herd immunity against COVID-19. However, the country’s pandemic officials decided to raise its target to include 90% of the population in September after the highly transmissible Delta variant accelerated the number of cases in the country.

Nationwide, Roque said 33.33% of the target population have been fully vaccinated as of Sunday. The national government aims to vaccinate 70% of the Philippine population before the start of the election period in February. – Rappler.com