Conspirators followed Percy Lapid for days before killing him – suspect ALLEGED GUNMAN. Joel Escorial, the self-confessed gunman in the slay of radio commentator Percival 'Percy Lapid' Mabasa, is escorted upon his arrival at the Department of Justice in Manila on October 24, 2022, for the preliminary hearing of a complaint filed by the Southern Police District.

Facebook Twitter Copy URL
Copied
Self-confessed gunman Joel Escorial says alleged middleman Crisanto Villamor did not give any reason when he ordered Escorial to kill him – he only offered the P550,000 bounty

MANILA, Philippines – The group behind the murder of hard-hitting journalist Percy Lapid followed him around his work and home for days before killing him in his vehicle in Las Piñas, self-confessed gunman Joel Escorial said in his extrajudicial confession.

The confession, dated October 18 but released to the media on Monday, October 24, contained the details of the plan that led up to the October 3 murder.

Escorial said that a certain Crisanto Palana Villamor detained in Bilibid ordered him to kill Lapid. Meanwhile, the other three in the group, siblings Israel and Edmon Dimaculangan and a certain “Orly” were given orders by another alleged middleman, Christopher Bacoto, to help Escorial commit the hit job.

They were offered P550,000 to kill the broadcaster. Escorial has been under law enforcement custody since he surrendered on October 17.

After receiving initial deposits amounting to P200,000 made to Escorial’s Banco de Oro (BDO) bank account from September 15 to 16, Escorial said he met up with Israel Dimaculangan at an eatery to discuss the location of Lapid’s house.

On September 22 and 23, Escorial said he, the Dimaculangan siblings, and Orly went to Lapid’s office in Mandaluyong but did not find him there.

(So on September 30, we followed Percy Lapid to his house and where he works. We found out what time and day he goes to work. We also found out where he usually passes by going to and from his work.)

(Orly also told us that whoever among me, Israel, and Edmon would be nearest to Percy Lapid must kill him, and if this was not followed, we would be shot/killed.)

On October 3, the day of the kill, Escorial said that he and Orly were on a motorcycle coming from Barangay Zapote. After briefly separating for a smoke break in the area around SM Center Las Piñas, Orly called Escorial to say that Lapid’s vehicle had passed by him.

Escorial immediately returned to Orly and his motorcycle, while the Dimaculangan siblings were on another motorcycle. The group followed Lapid’s vehicle going to Aria Street in Sta. Cecilia Village.

“At bago po makapasok sa guard house ay agad po namin siyang dinikitan at akin po siyang binaril ng tatlong beses,” said Escorial. (Before he got the the guard house, we immediately placed ourselves at his side and I shot him three times.)

After he shot Lapid, Escorial and Orly escaped on the motorbike. The Dimaculangan siblings were nearby and served as a lookout.

From Aria Street, the group went from Zapote to Bacoor, Cavite. Escorial eventually got off the vehicle and took a jeep ride back to his house in Bacoor to hide.

Escorial said he distributed the money as follows:

At the time of his confession, Escorial said he did not know his companions’ current locations. He also did not know who deposited the blood money into his account.

Coordination with the middlemen

Escorial said he knew Villamor for a long time. Before Villamor was detained, the two worked as hitmen in Tanauan, Batangas for a certain “Herman Agojo.” (There is a drug lord called “Herman Agojo” who was a witness in the 2016 congressional probe of the Bilibid drug trade. But it has yet to be confirmed if this is the same Herman Agojo Escorial was referring to.)

According to the self-confessed gunman, Villamor did not give any reason for wanting Lapid dead. He only offered a bounty for his head in exchange for P550,000.

The Philippine National Police’s Southern Police District confirmed that a murder complaint was filed against Escorial on October 19.

Justice Secretary Jesus Crispin Remulla said in a chance interview with reporters on Monday that the department has “not stopped studying all possibilities.”

He said he would turn over all information to the National Bureau of Investigation for validation.

“I will also ask [the NBI] to speak to the witnesses inside the custodial center so that this can be properly validated. I’ve also spoken to Dr. Raquel Fortun to ask her to conduct a second autopsy, to conduct verifying autopsy, so that she can also give her observations, because that is the agreement that I had with Roy Mabasa, who I spoke to yesterday, together with the son of Percy Lapid, so that, we’re attending to everything that has to be done,” said Remulla.

In a media release on Monday, former justice secretary and Senate president Franklin Drilon said the Lapid killing is far from solved.

“The prosecution must validate the confessions of self-confessed gunman Joel Escorial with corroborative evidence. This is crucial because the case cannot stand on the testimony alone of the gunman. The case for the prosecution still stands on thin ice,” Drilon told ANC’s Headstart on Monday.

In a separate statement, Drilon said that the death of the middleman just a day after Escorial implicated him in the crime was “suspicious and disturbing evidence of a wider conspiracy.”

Drilon said that the Philippine National Police (PNP) must go deeper to unmask the mastermind who ordered the middleman to kill Lapid.

“Suppose [Escorial] recants, what happens? The prosecution’s case will fall into pieces. The narration of the gunman therefore must be viewed with caution,” Drilon said.

Drilon added that a Senate investigation is not needed at the moment, only appealing for the PNP to do its work. 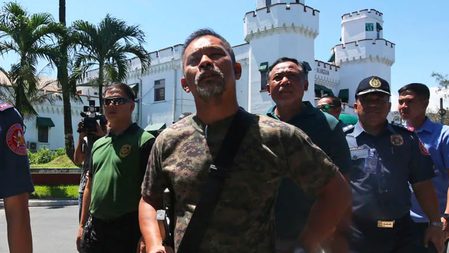