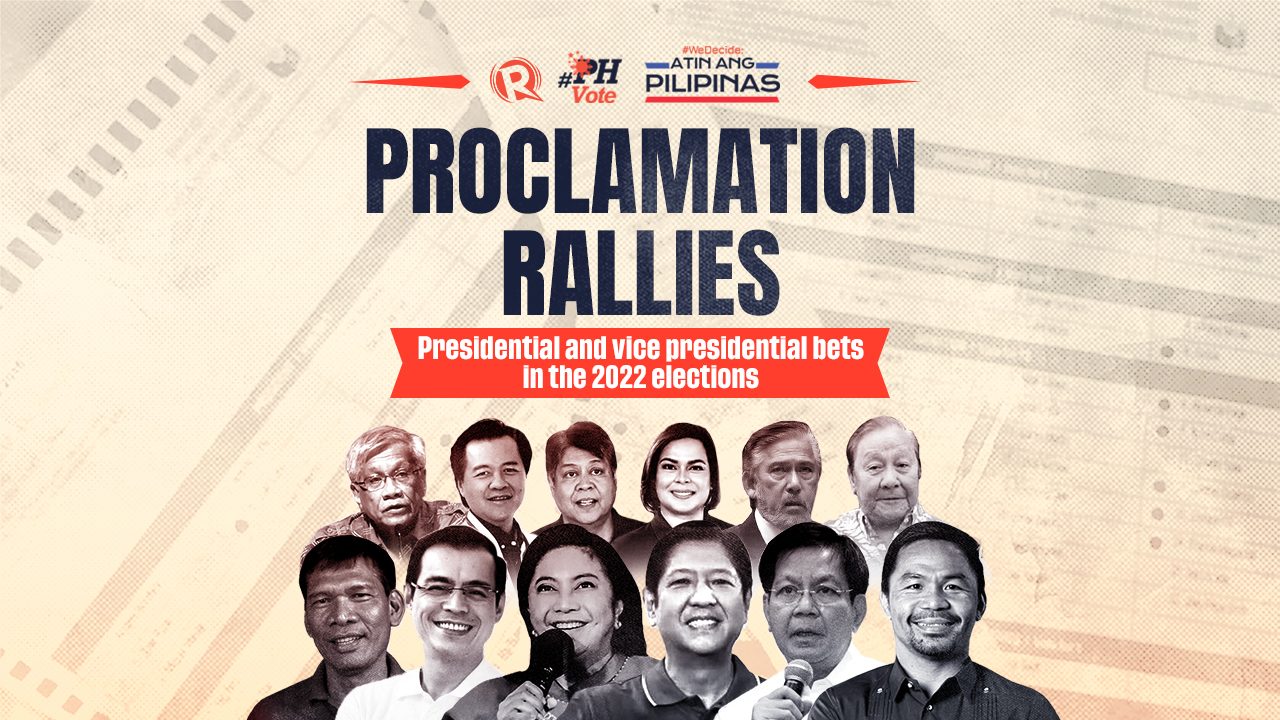 Presidential and vice presidential candidates launch their fireworks on Tuesday, February 8, as the campaign season officially begins with their proclamation rallies.

Rappler’s team of reporters, researchers, and editors are on the ground and online to give real-time updates, analyses, and fact-checks as the 2022 national election finally goes into full swing.

Below are live updates pages and live videos on all six tandems. Follow Rappler’s coverage!

Vice President Leni Robredo and her running mate Senator Kiko Pangilinan are set to launch their bids for the two highest positions in the land on Tuesday, February 8, the start of the official campaign period in the 2022 elections.

It is an early start for the Robredo-Pangilinan tandem on Tuesday, as they are scheduled to stage events with supporters across several towns in Camarines Sur, home province of the lone female presidential candidate from Bicol. By 4:30 pm, the opposition tandem is expected to return to Naga City to hear Mass at the Naga City Cathedral.

The main event is slated at 5:30 pm at Plaza Quezon in Naga City, where Robredo and Pangilinan are expected to appear on stage together with their senatorial ticket and their Bicolano allies.

Click this link for updates on the Robredo-Pangilinan tandem’s proclamation rally for the 2022 elections.

Doors of the arena open at 2 pm. The proclamation rally starts at 4 pm.

Visit this page for the live updates.

On February 8, the official start of the 2022 campaign season, Manila Mayor Isko Moreno and his running mate doctor Willie Ong kick off their respective presidential and vice-presidential bids from Heroes Park or Kartilya ng Katipunan in Manila.

Check out this page for live tweets, videos, photos, and more.

Senators Panfilo Lacson and Vicente Sotto III launch their bid for the two highest posts in the land as the official campaign period for the 2022 elections begins on Tuesday, February 8.

Being the most senior candidates in their races, Lacson and Sotto put their decades of experience upfront as they call for Filipinos to cast their votes for them in May.

Bookmark this page for the latest.

Senator Manny Pacquiao kicks off his presidential campaign where it all started – in General Santos City, the southernmost city of the country.

Pacquiao and Atienza are scheduled to first hold a caravan around General Santos City at 1 pm on Tuesday, February 8, starting at Barangay Bawing all the way to the Oval Plaza Grand Stand for the proclamation rally.

Visit this page for updates, live from General Santos.

In a historic move, labor leader and Partido Lakas ng Masa presidential bet Leody de Guzman will vie for the presidency against bigger names in Philippine politics. De Guzman, a labor leader and organizer for over three decades, will be having Laban ng Masa chairperson Walden Bello as his running mate.

The tandem had built their platforms on economic, political, and social development reforms. As they’ve said in previous statements, they are out to fight against the so-called “Marcos-Duterte Axis of Evil.”

Click this link for real-time news, photos, videos, and other updates on the De Guzman-Bello campaign launch.