MANILA, Philippines – Over two years into the COVID-19 pandemic, President Rodrigo Duterte asked his health chief why the Omicron variant is spreading so quickly, even among the vaccinated. In particular, the President wanted to know: Is it airborne?

Duterte asked the question on Monday, January 17 – ironically, without a mask – during “Talk to the People,” a regular meeting with his Cabinet and top government officials that is recorded then aired hours later via government channels and Philippine media.

In response, Health Secretary Francisco Duque III didn’t immediately say if the virus is airborne and instead pointed to failure to comply with minimum health standards.

COVID-19 is in fact airborne, according to the World Health Organization (WHO).

Watch the exchange between Duterte and Duque below. 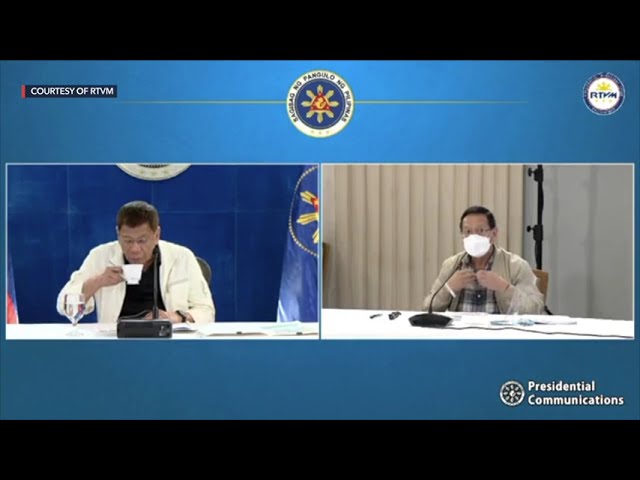 Prior to Duterte’s question, Duque had given updates on the COVID-19 situation in the Philippines, including a spike in cases, fueled partly by the highly transmissible Omicron variant.

Duterte had also asked how one can determine if a person caught the Omicron variant – as opposed to other variants – which Duque said can only be checked via genome sequencing. The health chief added that based on the latest tests, more than 90% of those sequenced in the country had the Omicron variant.

The WHO said COVID-19 is spread via short-range transmission, typically when people are in close contact with each other, or via long-range transmission, which usually happens in poorly ventilated spaces or crowded indoor settings. People can also become infected if they touch their eyes, nose, or mouth after touching something that’s been contaminated with the virus.

Proper ventilation, especially in indoor spaces, has been identified as one way to adjust to the “new normal” of a world with COVID-19.

The Philippines only stopped requiring plastic barriers in public transportation in late 2021. The country also only lifted mandatory face shield wearing in November 2021 for areas under Alert Levels 1 to 3. – Rappler.com