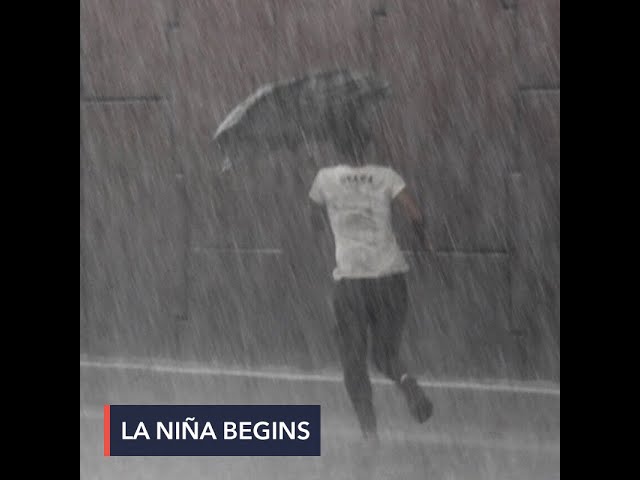 Facebook Twitter Copy URL
Copied
(3rd UPDATE) Due to La Niña, 'above normal rainfall' is expected in most areas of the Philippines during the last quarter of 2020 and early 2021

The Philippines’ state weather bureau announced on Friday, October 2, the onset of the La Niña phenomenon.

PAGASA explained that sea surface temperature in the central and equatorial Pacific has been cooling since June. It then reached La Niña threshold in September.

“Based on the latest forecast, weak to moderate La Niña is likely to persist until the 1st quarter of 2021,” added the state weather bureau.

While the ongoing La Niña is described as weak to moderate – not full-blown – it could still have serious impact on the country.

What happens during La Niña?

PAGASA warned that La Niña would cause more rain than usual.

“Above normal rainfall” is expected in most areas of the country during the last quarter of 2020 and early months of 2021.

The rain could trigger floods and landslides, especially in the eastern parts of the Philippines “which normally receive greater amount of rainfall at this time of the year.”

Solidum noted that the deadly Guinsaugon landslide in Saint Bernard, Southern Leyte, happened during La Niña in February 2006. The landslide, triggered by days of heavy rain and an earthquake, left more than 1,100 people dead.

The western parts of the Philippines should not be complacent as well.

(No two La Niñas are alike. Based on historical records, we had La Niña years where, even if La Niña had been weak to moderate, areas which were normally dry in the western section of Luzon – in 2006, they were also flooded.)

PAGASA also said 5 to 8 tropical cyclones are likely to enter or develop in the Philippine Area of Responsibility from October 2020 to March 2021.

Most of these tropical cyclones are seen to make landfall, which would pose hazards, especially as the Philippines continues to struggle with the coronavirus pandemic.

On the upside, dams badly needing water, like the Angat Dam in Bulacan, are likely to get filled in the coming months.

(La Niña is a solution to the decreasing water levels in dams, which are important for our day-to-day needs, but it could be destructive if we don’t prepare for it well.)

What should Filipinos do?

PAGASA advised government officials and the public to prepare ahead of the heavy rain and tropical cyclones, taking into consideration the challenges resulting from the COVID-19 crisis.

For instance, aside from identifying evacuation centers, officials also need to ensure that there would be adequate space for physical distancing.

(We should be able to maintain our requirements for preventing the spread of COVID-19.)