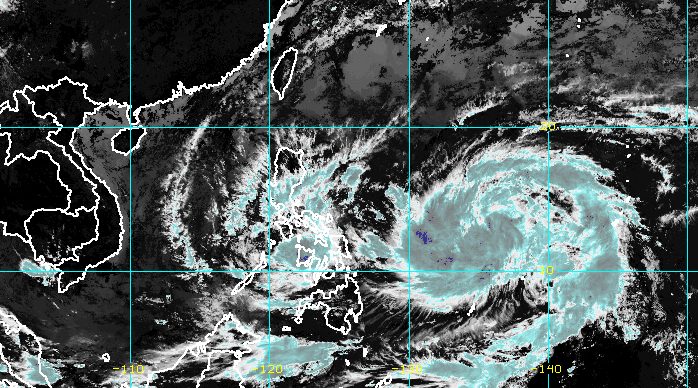 TROPICAL CYCLONES. Tropical Depression Agaton (Megi) inside the Philippine Area of Responsibility and Severe Tropical Storm Malakas outside PAR, as of April 11, 2022, 11 am.

Facebook Twitter Copy URL
Copied
Despite the weakening trend on Monday, April 11, rain from Tropical Depression Agaton (Megi) will continue since it is lingering in the same spot

In a noontime briefing, the Philippine Atmospheric, Geophysical, and Astronomical Services Administration (PAGASA) said Agaton’s maximum sustained winds decreased from 55 kilometers per hour to 45 km/h. Its gustiness is now up to 60 km/h from the previous 75 km/h.

Despite the weakening trend, rain from Agaton will continue since it is lingering in the same spot. Here is PAGASA’s rainfall forecast for the tropical depression as of 11 am on Monday: The same areas remain under Signal No. 1 as of 11 am on Monday. These areas are experiencing strong winds that pose a “minimal to minor threat to life and property”:

From Monday to Tuesday afternoon, April 12, Agaton is expected to slowly make a loop while in the vicinity of the northeastern part of Leyte and the southern parts of Samar and Eastern Samar, essentially starting to move away from land.

But PAGASA said Agaton could also weaken into a remnant low even before it emerges over the Philippine Sea, due to land interaction.

Malakas, meanwhile, was already 1,300 kilometers east of Southern Luzon late Monday morning. The severe tropical storm is moving northwest over the Philippine Sea at the same speed of 15 km/h, and may enter the Philippine Area of Responsibility (PAR) on Monday evening or early Tuesday morning. It would be given the local name Basyang.

Malakas also slightly intensified, with its maximum sustained winds increasing from 95 km/h to 100 km/h. Its gustiness is now up to 125 km/h from the previous 115 km/h.

PAGASA expects Malakas to strengthen further into a typhoon on Monday evening, then reach a peak intensity of 155 km/h late Tuesday or early Wednesday.

While Malakas or Basyang is likely to influence Agaton’s movement, it is not seen to make landfall and will have no direct effect on weather in the Philippines. It is expected to leave PAR on Tuesday evening or early Wednesday morning.