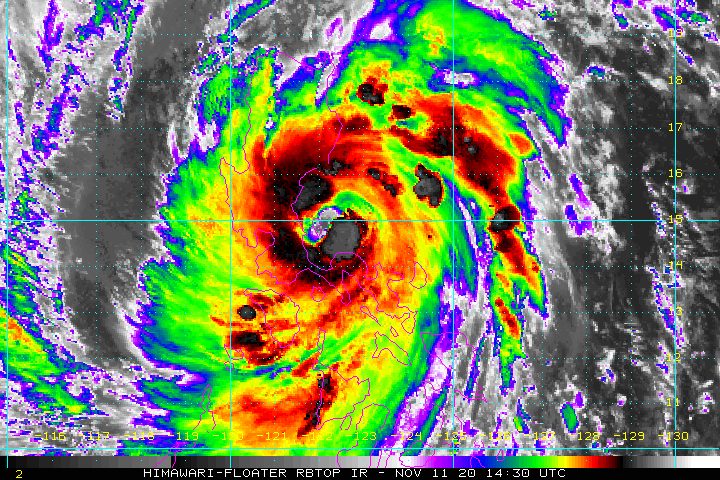 Typhoon Ulysses (Vamco) made its first landfall in Patnanungan, Quezon, at 10:30 pm on Wednesday, November 11.

Ulysses further intensified before hitting land for the first time, too, said the Philippine Atmospheric, Geophysical, and Astronomical Services Administration (PAGASA) in a bulletin released past 11 pm on Wednesday.

Ulysses is moving west northwest at the same pace of 15 km/h.

PAGASA later announced on social media that the typhoon made its second landfall in Burdeos, also in Quezon, at 11:20 pm on Wednesday.

The state weather bureau warned that destructive winds and intense to torrential rain from Ulysses’ eyewall and inner rainbands will be experienced in the following areas within the next 3 hours, or until around 2 am on Thursday:

“Heavy damage to infrastructure and vegetation is expected,” PAGASA said.

After hitting Quezon, Ulysses will cross Central Luzon and emerge over the western seaboard of Zambales on Thursday morning.

PAGASA earlier said the typhoon may be closest to Metro Manila between 4 am and 6 am on Thursday. But late Wednesday evening, the capital region was already experiencing fierce winds and rain.

This is the latest list of areas under tropical cyclone wind signals as of 11 pm on Wednesday:

The state weather bureau also further expanded its rainfall forecast as of 11 pm on Wednesday.