Jan 22, 2017 3:44 PM PHT
Lian Buan
Facebook Twitter Copy URL
Copied
Which corruption cases are still pending before the anti-graft court and what are their statuses in the judicial process? 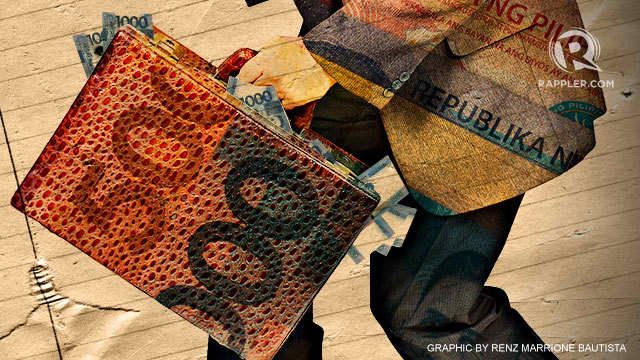 MANILA, Philippines  – From 1979 to November 2016, there have been 10,094 cases of malversation and 7,968 cases of graft filed against public officials before the Sandiganbayan. They make up half, (53.59%) of the 33,772 corruption cases received by the special court in that time period.

According to Sandiganbayan data as of November 2016, there are currently 4,164 cases pending the court’s decision, excluding a couple of high-profile charges it already dismissed in December 2016 and early January this year. (READ: Dismissed charges against JV Ejercito, Elenita Binay, Joc-Joc Bolante and Rex Gatchalian)

Here is a rundown of the biggest corruption cases which have yet to be resolved. (READ: Plunder and graft trials: How do cases proceed in the courts?) WHAT: 15 counts of graft for allegedly receiving P172.8 million in kickbacks from his pork barrel through his former chief of staff, Atty Gigi Reyes. (READ: TIMELINE: Enrile and the pork barrel scam) WHAT: Plunder and 11 counts of graft for allegedly receiving P183.793 in kickbacks from his pork barrel, some of which were supposedly personally delivered to his San Juan City home by Ruby Tuason. WHAT: Plunder and 16 counts of graft for allegedly receiving P224.5 million in kickbacks from his pork barrel, through his former chief of staff Atty Richard Cambe. WHAT: Plunder for facilitating the allocation of Enrile’s pork barrel into bogus NGOs which allegedly earned the former Senator P172.8 million in kickbacks

STATUS: Arraigned. The Sandiganbayan had also dismissed her motion to quash. WHAT: Graft, malversation, and falsification of public documents for the alleged overpriced construction of the P2.2 billion Makati City Hall parking building WHAT: Graft and falsification of public documents for the alleged overpriced construction of the P2.2 billion Makati City Hall parking building WHAT: Graft for allegedly trying to extort $30 million from a Czech firm to secure a contract for the MRT expansion project.

WHAT: Graft for favoring his uncle-in-law’s company PH Trams for a $1.15 million maintenance contract with the MRT

STATUS: The Sandiganbayan has junked Vitangcol’s motion to quash WHAT: Graft over the alleged irregular acquisition of Local Water Utilities Administration (LWUA) of the Gatchalian-owned Express Savings Bank. The P80 million deal happened during Pichay’s term as LWUA chair WHAT: Graft and malversation for the irregular purchase of P45 million worth of beds and sterilizers for the Ospital ng Makati during her term as mayor WHAT: 2 counts of graft, one count each for malversation and falsification of documents for a P10M pork allocation in 2008. Investigators found the intended municipalities were not suitable for farming and there were ghost beneficiaries

STATUS: The Ombudsman ordered his dismissal last November 2016 but the Senate ruled to keep him, saying Ombudsman has no authority to order them to impose penalties upon its members. WHAT: 2 counts of graft for the irregular allocation of P29.1 million worth of PDAF to NGO Focus Development Goals WHAT: 10 counts of graft for allegedly creating private foundations in Switzerland and holding financial interests in several private enterprises when she was Governor of Manila from 1978-1984

STATUS: The last day of trial for the 25-year-old graft case is set for February 16 WHAT: Civil forfeiture case for failure to disclose the transfer to different bank accounts of $2 million allegedly earned through extortion in 2001. WHAT: Graft, malversation and direct bribery for allegedly favoring an NGO for a livelihood project without biddingm, and receiving P1.95 million in kickbacks from his pork barrel. WHAT: Technical malversation over the alleged irregular purchase of P2.1million worth of high-powered firearms in San Juan City while Ejercito was still mayor

STATUS: On trial. The Sandiganbayan had already acquitted Ejercito of graft over the same case. – Rappler.com