Facebook Twitter Copy URL
Copied
Lawyer Boni Tacardon, De Lima's legal counsel, says: 'Let me just be clear, the defense team is not actually closing the doors on a possibility of an extended home furlough or a transfer of custody'

MANILA, Philippines – Opposition leader and former senator Leila de Lima faced what could be one of her biggest ordeals while under detention: being held hostage.

On Sunday, October 9, the former lawmaker was held hostage by alleged sub-leader of local terrorist group Abu Sayyaf, Feliciano Sulayao Jr. It happened after Sulayao and his companions, Idang Susukan and Arnel Cabintoy, attempted to escape from the detention facility.

De Lima fortunately survived the incident, but said she thought she would not come out of it alive.

Aside from renewed calls to free her, information about facility transfer and furlough offers to De Lima also floated. Lawyer Boni Tacardon, in an interview with Rappler, said they are not closing any doors on any offers.

“Let me just be clear, the defense team is not actually closing the doors on a possibility of an ‘extended home furlough’ or a transfer of custody,” the De Lima’s legal counsel said.

Tacardon explained all the offers being presented to their team.

According to the him, De Lima’s camp had no formal conversation with anyone regarding the former senator’s transfer, especially the alleged offer of a house arrest. Even though there were suggestions before to seek house arrest, these were never entertained by De Lima, Tacardon said.

Tacardon explained that De Lima stood by her principles that she is being jailed for fighting for human rights. 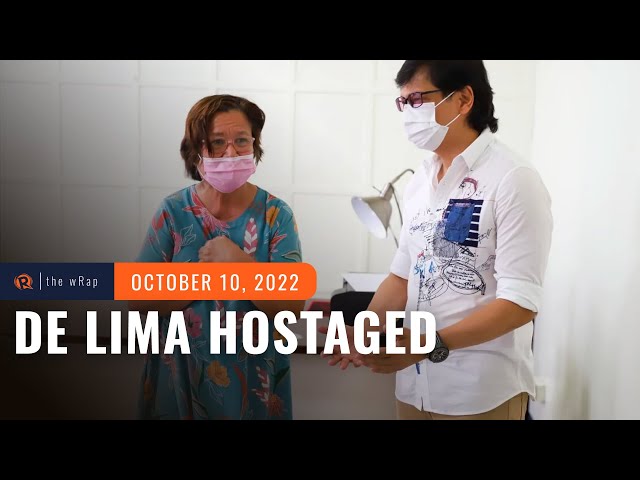 (But all of those were never entertained by former senator Leila de Lima because of her conviction that she is a political prisoner, a prisoner of conscience. She believes she’s there because she fought and championed human rights and the truth.)

On Sunday, after the hostage-taking incident, President Ferdinand Marcos Jr. announced that De Lima will be given the option to transfer to a different detention facility. Interior chief Benhur Abalos visited her right after the President’s announcement and relayed the offer.

Abalos announced later that day that De Lima declined the offer and said the former senator still found the PNP custodial center safe for herself.

Tacardon explained that the offer was relayed to them with minimal details only. They did not even know the location of the new facility Abalos had offered to De Lima. “‘Yong pag-decline, naintindihan nila na medyo traumatized pa siya and hindi pa niya na-process ‘yong situation kaya gusto niya sa Crame (When she declined, they understood that she may have been still traumatized and she had not yet processed the situation that’s why she wanted to stay in Camp Crame),” De Lima’s legal counsel said.

Tacardon also explained that it was only on Monday when they knew that Abalos was talking about a more secure area. The interior chief mentioned the detention facilities where Senators Bong Revilla and Jinggoy Estrada stayed before.

According to Tacardon, the area was outside the walls of De Lima’s detention area and farther from other detainees.

On Sunday, Senator Imee Marcos, the President’s sister, said a home furlough was allegedly being offered to De Lima by the Department of Justice (DOJ) and the Philippine National Police.

“I strongly urge Sen. Leila de Lima to have the medical checkup she requires, with her own physician, as well as immediately take up the extended home furlough that both the DOJ and the PNP offered as early as July,” Marcos said.

Tacardon reiterated they had no formal conversation about an extended home furlough. He added that after Marcos’ statement reached their camp, they said they would look into that option.

De Lima’s legal counsel added that they told De Lima they would study the possible advantages and disadvantages of the offer. If De Lima decides to seek an extended home furlough, she and her camp will still need to process that through the court.

In a message to reporters, Justice Secretary Jesus Crispin “Boying” Remulla said the DOJ is open to discuss the home furlough offer to De Lima in court.

“That should be discussed in open court,” Remulla said. “Yes, it’s a possibility mentioned in discussions.”

Former senator and former PNP chief Panfilo “Ping” Lacson also claimed on Sunday that De Lima had declined an offer by the PNP to be transferred to a different facility.

Tacardon confirmed that the police mentioned the transfer of De Lima to another facility, but not in the form of a formal “offer.” The legal counsel said this happened in August, when US lawmakers were set to visit De Lima.

On August 18, US lawmakers led by Senator Edward Markey were initially prevented from visiting De Lima inside the PNP custodial facility. The PNP said the lawmakers were barred because they did not have a court permission. The police also cited the prevailing COVID-19 situation inside Camp Crame at that time.

A day later, the lawmakers were able to visit De Lima after securing a court permit. It was unusual for a court order to be required before visiting De Lima because previously, the PNP Custodial Center had jurisdiction over visit permissions. PNP guidelines and procedures for persons under its custody did not require a court order.

De Lima’s camp and the American lawmakers, through the US embassy, had also communicated previously with the PNP about the visit. The former senator also sent a separate letter addressed to the PNP chief to signify her conformity to the visit.

It was when De Lima and her team complained about the incident involving US legislators that the police mentioned a “transfer of detention.” (We complained. That’s when they said, “If you’re no longer happy with us, ma’am, you can transfer to a different facility.” It was put that way.)

De Lima’s legal counsel said the PNP’s “offer” was not really out of concern, but a response to their complaint.