Jun 7, 2017 6:15 PM PHT
Facebook Twitter Copy URL
Copied
The photo of the alleged plotters turns out to have been taken in 2015 at the Iloilo Airport, and not weeks before the Maute crisis erupted 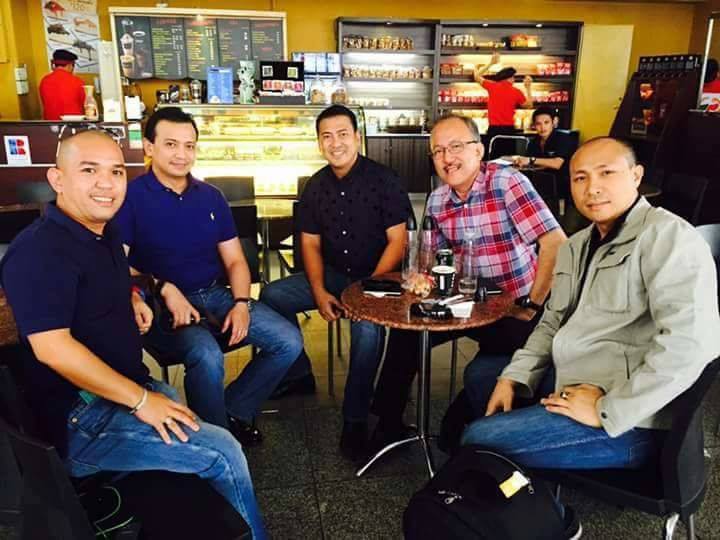 MANILA, Philippines – In the thick of war in Marawi, Justice Secretary Vitaliano Aguirre on Wednesday, June 7, stirred a hornet’s nest.

He insinuated to reporters in Manila that opposition lawmakers Senator Benigno “Bam” Aquino IV, Senator Antonio Trillanes IV, and Magdalo Reprsentative Gary Alejano may have had something to do with the attack of terrorist groups in the city. Fighting broke out on May 23 when the military launched a surgical strike in Barangay Basak Malutlut against “high value targets” belonging to the Abu Sayyaf and Maute terror groups.

“Hindi ko malaman (I don’t know) why after they went there, nagkagulo na (chaos ensued) after two weeks,” Aguirre said.

Aguirre alleged they met with political clans here – the Alontos and the Lucmans – who currently rule the province. This turned out to be false.

Aquino was linked to the Marawi clash because of his presence there before the crisis. Fake news blogs speculated he met with Maute rebels.

The Department of Trade and Industry (DTI) quickly issued a clarification saying Senator Aquino was in Marawi City on May 19 to attend the launch of ARMM’s first Negosyo Center in the city. Aquino is the author of the Go Negosyo Law.

In a press conference with reporters Wednesday, Aguirre tagged Aquino and included Trillanes, Alejano, and former presidential political adviser Ronald Llamas who, he said, were all in Marawi days before the crisis.

“Because sina Senator Bam Aquino, hindi naman, sinasabi ko lang, ano, na he went to Marawi on April 24 and April 28 and they stayed, they had a meeting at Lake View Resort Hotel on May 2. Present were Senator Aquino, Ronald Llamas, Alejano, Trillanes, and some clans doon sa Marawi, mga Moro family,” Aguirre said.

(Because Senator Bam Aquino, I’m not saying, all I’m saying is that he went to Marawi on April 24 and April 28 and they stayed, they had a meeting at Lake View Resort Hotel on May 2. Present were Senator Aquino, Ronald Llamas, Alejano, Trillanes and some clans in Marawi, Moro families.)

Aguirre tried to show a photo from his phone of a group of men including Trillanes, Alejano and Llamas but quickly hid it before reporters and camera crew could take a snapshot. The photo he showed was that of Trillanes, Alejano, Llamas, Mark Lapid and Zamboanga del Sur Vice Govenor Ace William Ceriles posing for a photo at a coffee shop. The photo was posted on May 13 by a Facebook page supportive of President Rodrigo Duterte.

Cerilles, however, confirmed to Rappler that the photo was taken in 2015 at the Iloilo Airport. He posted the same photo on his Facebook account on September 4, 2015. 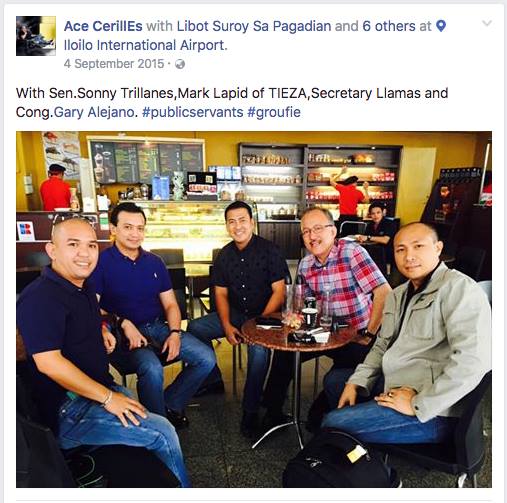 “Ito yung picture nila (This is their picture),” Aguirre teased as he tried to show the photo to reporters then said, “Huwag muna! (Not yet!)” before he hid his phone.

In a statement issued on Wednesday, Aquino said, “It would be prudent for Secretary Aguirre to clarify dates, seek evidence and request for official statements from legitimate government agencies before he makes yet another false accusation.”

Aquino attended the Go Negosyo Event on May 19 with Zia Alonto Adiong, spokesman of the provincial crisis management committee in Marawi, and Mamintal Alonto Adiong Jr, the vice governor of Lanao del Sur. Adiong Jr was the Liberal Party candidate in the 2016 vice gubernatorial race in Lanao del Sur.

“Vice Gov. Adiong, Gen. [Rolando Joselito] Bautista and Gen. [Nixon] Fortes were also with me during the event. These are easily verifiable for anyone who cares to find the truth,” Aquino said.

Trillanes, for his part, said he has not been back to Marawi City recently. “I also did not have any meeting in Marawi on May 2 since I haven’t visited Marawi for the past 3 years. But don’t take my word for it, simply check the Senate records for May 2.”

A visibly irked Trillanes also said, “The incompetence of Aguirre is only matched by his stupidity. I would advise him to avoid getting his intel from Facebook conspiracy theorists.”

Llamas, for his part, told Rappler he was in the US on May 2. “They can easily check that with the Immigration, which is under the Department of Justice,” Llamas said.

Alejano said House records would show he was giving a press conference and attended the plenary session at the lower chamber on May 2. He added it’s also been years since he visited Marawi City.

“This is a complete lie fabricated by no less than a secretary of justice who should be the first one to uphold truth in pursuit of justice in this country. He has become a purveyor of anything that is fake, a peddler of lies and a persecutor of people who do not agree with the policies of the Duterte administration,” Alejano said.

During his press conference, Aguirre was asked about his directive to the National Bureau of Investigation (NBI) about the P52 million cold cash found by the military in a house previously controlled by the Mautes. After saying it may not be necessary for the NBI to investigate the matter, with the military and the police already handling the issue, Aguirre continued that the money could have been placed there to mislead.

When he was asked what he meant by the statement, Aguirre mentioned the opposition lawmakers’ supposed presence in Marawi two weeks before the crisis broke out.

Pressed to elaborate, Aguirre said he didn’t “want to connect it” nor “speculate” but still proceeded to say that the lawmakers met with influential clans in Marawi which could have sparked or triggered the crisis.

(I don’t know, what I was told is that they met with several families there, including the Lucmans, the family of Alonto, but I don’t want to connect it, unless there is evidence from the money taken and seized.)

In Marawi City, the local politicians were shocked when the news reached them. Adiong Jr immediately called a press conference to respond to the allegations.

“At 1:02 pm today, Secretary Aguirre called me up and said his statements were misquoted by the press. With that, ladies and gentlemen, I hope this clears the issue once and for all,” Adiong declared.

Still, the controversy compelled Adiong to present detailed activities during Aquino’s visit – including a breakfast at Jollibee – in a bid to prove that no such meeting took place. – with reports from Camille Elemia/Rappler.com