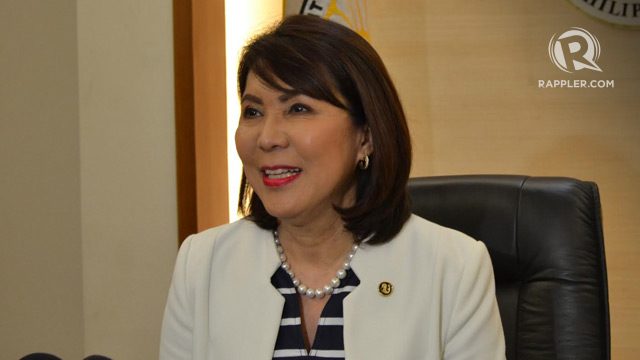 MANILA, Philippines (UPDATED) – Tourism Secretary Wanda Teo insisted she had no prior knowledge of the P60-million worth of advertisements placed in her brother’s production company, even though the contract of the Department of Tourism (DOT) specifically mentioned her brother Ben Tulfo’s Bitag Media.

A blocktimer is an independent production company whose shows and programs are aired over a network or channel. In this case, PTV is the channel and Bitag’s show, Kilos Pronto, is the blocktimer.

To defend herself, Teo said in a radio interview on April 28 that she did not know PTV was going to tap Tulfo’s Bitag Media company for the ad placements, and that she was even “surprised” to find out.

(Our contract is between DOT and PTV, because the government wanted to help the government station, that was the mandate of the President, that was what we were told. Beyond that, I didn’t know if they gave it to my brother’s outift. Our contract was with PTV, so if PTV gave it to my brother, I didn’t know because we had no…in fact I was even surprised because it was between DOT and PTV4.)

On Monday, April 30, Teo tweaked her statement and said that she knew the ad placements were going to Kilos Pronto, but only after they signed the contract.

“After the signing of the contract, they told us [they will place ads on] Kilos Pronto because the show’s ratings were high,” Teo told reporters in a quick press conference that entertained only a few questions from media. Not long after, she left for a meeting.

The question is, when did Teo find out that the ad placements were going to Bitag’s Kilos Pronto?

The COA report says that the memorandum of agreement (MOA) of DOT “specifically required” PTV to air the advertisements on Kilos Pronto.

“The MOA on file was between [PTV] and DOT, specifically requiring [PTV] to air a 6-minute segment buy in PTVs Daily News-type magazine segment, Kilos Pronto, plus a 3-minute DOT spot within the program. There were no provisions for the airtime rates per segment/spot and such other terms and conditions of the commercial advertisement specifically as regards the manner of payment,” state auditors said in their 2017 findings and recommendations on PTV.

The COA said there was no MOA between PTV and Bitag Media. In a statement on April 28, PTV said they have a contract with Bitag Media, and that they already clarified it with COA “in a recently held exit conference.”

Tulfo also accused an official of leaking the COA report, which prompted newly-appointed Tourism Undersecretary Jose Gabriel “Pompee” La Viña to say it wasn’t him who leaked it.

The COA report was not leaked. The government auditor always uploads audit reports on the COA website for everyone to see and download. – Rappler.com