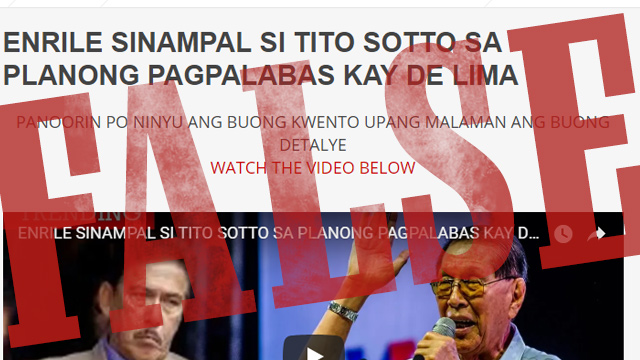 The post was shared 20 times in different Facebook pages and groups. All of these accounted for a total of 1,888 interactions and 2,291,163 followers as of July 9.

The claim was also posted by YouTube channel “Pagbabago ng Pinas” on July 8.

The facts: The embedded video is a YouTube clip of the first segment of Sonshine Radio DZAR 1026’s talk show on July 6. It was hosted by Enrile, Jess Aranza, and Al Tatel.

Enrile and the two other anchors did not mention Sotto and De Lima.

(The Philippine government should give protection to local investors so that the cash flow goes to the country instead of them investing in other countries.)

The video from the radio interview was uploaded by “Tatay Duterte News” on July 8. The said channel has a following of 39,000 users and also uploaded videos used by hoax posts, such as former Chief Justice Maria Lourdes Sereno supposedly demanding the resignation of President Rodrigo Duterte after an order from of Vice President Leni Robredo.

Rappler has also checked posts on other sites that use alarming headlines with attached videos unrelated to the claims. Examples range from a video supposed showing a priest killing a single mother to North Korean leader supposedly calling President Rodrigo Duterte during his June 3 speech in South Korea.

The blog dutrending.info first post was on July 7. Since then, 6 posts have been published, all either pro-Duterte or anti-opposition. (READ: State-sponsored hate: The rise of the pro-Duterte bloggers)

All posts have no text content related to the claim, it only contains a company profile which mentions “Newz Live” and not the blog itself. A certain “V�O L�C” is the author of all 7 seven posts. – Miguel Imperial/Rappler.com