MISLEADING: Only LP is linked to multi-billion-peso scams during Aquino time

Apr 10, 2019 12:56 PM PHT
Rappler.com
Facebook Twitter Copy URL
Copied
Members of other political parties, like Lakas-CMD and UNA, have also been implicated in scams where members of the LP were also allegedly involved 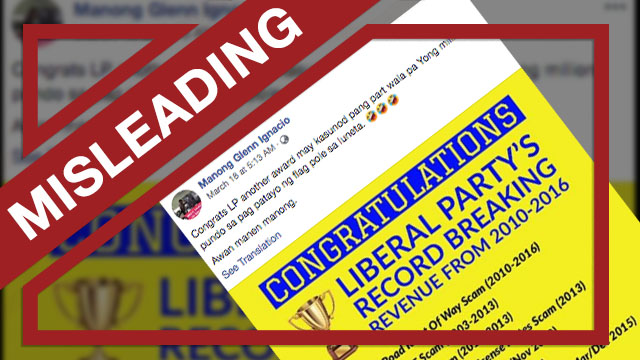 CLAIM: The Facebook page Manong Glenn Ignacio claimed in a post dated March 18, 2019, that the Liberal Party (LP) is linked to multi-billion-peso scams committed during the presidency of its chairman emeritus, Benigno Aquino III.

A yellow poster – referencing the LP color – containing a 12-item list of scams has a banner saying, “Congratulations Liberal Party’s record-breaking revenue from 2010 to 2016.” It also bears the logo of the party.

Each listed scam includes the supposed amount under investigation and the years covered. There is a controversy, however, that, contrary to the poster’s title, started in 2003, or 7 years before the Aquino presidency: the Priority Development Assistance Fund (PDAF) scam. 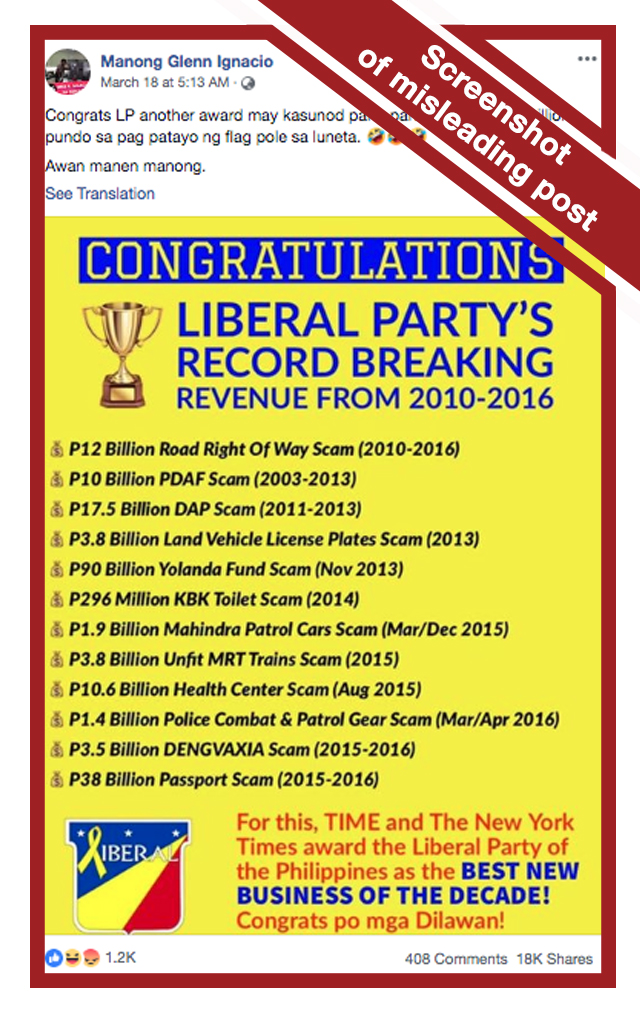 It also mocked the opposition party for being recognized by Time and The New York Times as the “best new business of the decade.”

The claim was spotted via Crowdtangle to have been posted by 35 other pro-Duterte pages and groups, garnering a total of 29,000 interactions as of writing.

The Facts: While some members of the LP were indeed allegedly involved in the multi-billion-peso pork barrel anomaly, members of other political parties have also been implicated, based on reports by the Commission on Audit. (READ: Aquino admin solons linked to pork barrel scam)

The P10-billion pork barrel scam involved not only politicians belonging to the LP, but also members of the Lakas-Christian Muslim Democrats (Lakas-CMD) party and the United Nationalist Alliance (UNA). (READ: No need for Janet Napoles: Cases vs LP lawmakers pending at Ombudsman).

The former lawmakers from other parties include Ramon “Bong” Revilla Jr, who is running to return to the Senate. Revilla was acquitted by the anti-graft court of plunder charges in 2018 but was also ordered to return P124.5 million to the Philippine treasury. He is still facing graft charges in relation to the pork barrel scam. Revilla ran under the Romualdez-led Lakas-CMD during the 2013 campaign.

Jinggoy Estrada and Juan Ponce Enrile, both of whom are also seeking to return to the Senate, are also facing plunder charges in relation to the PDAF scam. They both ran under UNA in 2013. (READ: LIST: 2019 Senate hopefuls facing cases, complaints, probes).

Some LP key officials have, however, been linked to other alleged irregularities, as claimed in the post.

Former president Aquino and his former budget secretary Florencio Abad were charged by the Ombudsman with usurpation of legislative power for implementing the Disbursement Acceleration Program (DAP) in 2011. (READ: TIMELINE: The rise and fall of DAP).

Abad, along with former public works secretary Rogelio Singson, were held liable by the justice department for an alleged P8.7-billion road scam.

It is also worth noting that the meme only took note of corruption scandals that surfaced during the term of President Aquino, who ran under the Liberal Party. For a list of personalities who have been charged with plunder in previous administrations, check: Plunder cases in the Philippines: Was anyone punished?

Rappler has fact-checked similar claims associating the LP with multi-billion-peso scams. In 2018, the supposed statement from the UN accusing “dilawans” of using Yolanda rehabilitation funds was proven to be a “hoax.” – Glenda Marie Castro/Rappler.com