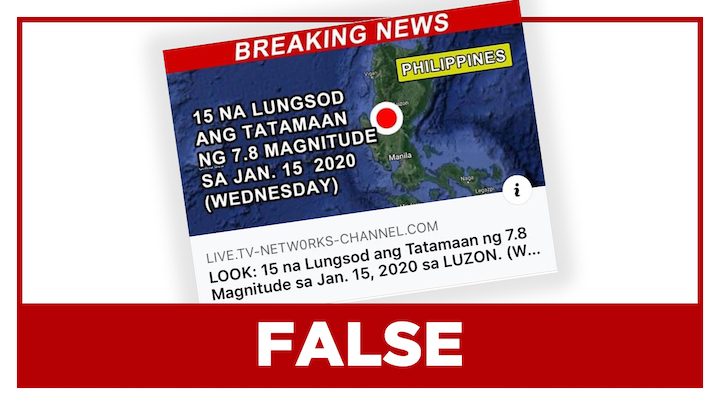 Facebook Twitter Copy URL
Copied
Phivolcs maintains that there is 'no reliable technology in the world that can confidently predict the date, time, and location of large earthquakes'

Website live.tv-netw0rks-channel.com published a story with the headline, “LOOK: 15 na Lungsod ang tatamaan ng 7.8 Magnitude sa Jan. 15, 2020 sa Luzon (Wednesday),” alluding to an earthquake. (LOOK: 15 cities that will be hit by a magnitude 7.8 earthquake on January 15, 2020 in Luzon on Wednesday).

The featured image for the article – and what appears when shared online – is a screenshot of a map with a red dot in Luzon. The image also has a “breaking news” banner and the headline placed on it. Many readers sent the link and screenshots of the Facebook posts to Rappler for verification.

The article has been shared on Facebook at least 3,616 times so far, according to monitoring tool CrowdTangle.

The facts: Claims alluding to expected earthquake schedules have been debunked repeatedly by Rappler. The Philippine Institute of Volcanology and Seismology (Phivolcs) has also repeatedly pointed out that there is no available technology that could accurately predict when earthquakes will strike.

(There’s no way to predict earthquakes, and hoaxes like these are common, and have been spread for a long time.)

The claim spread on social media after Taal Volcano spewed ash on Sunday, January 12. As of this writing, Taal Volcano remains under Alert Level 4.

The article from live.tv-netw0rks-channel.com includes a video, but the user is prompted to share the article first before watching the rest of the video. In addition, after clicking the link, the reader is redirected to another website that contains the video along with multiple ads.

The embedded video is not even related to the Taal eruption. It is a 24 Oras news report on April 29, 2019 titled, “Phivolcs: ‘Di bababa sa 20 ang lindol sa bansa kada araw (Phivolcs: At least 20 earthquakes will be experienced in the Philippines each day),” which just points out the vulnerability of the country to earthquakes.

There are no additional details on the website about the source of this claim, nor about the 15 cities that will be supposedly hit.

Phivolcs has long maintained that it “cannot predict when or where an earthquake or tsunami will happen.”

“There is no reliable technology in the world that can confidently predict the date, time and location of large earthquakes,” Phivolcs said on its Facebook page in April 2019.

“What we do is prepare earthquake scenarios of hazards and impacts to be used as guide for mitigation, preparedness and response,” Phivolcs added.

In a primer on its website following the October 2019 earthquakes in Cotabato, Phivolcs observed that rumors “claiming to predict an earthquake, tsunami, or volcanic activity are easily spread that may cause panic.”

The agency pleaded with the public to refrain from sharing claims from unconfirmed and unreliable sources, and to always verify information with authorities.

“Please avoid sharing these messages because your friends and relatives will think that you believe these messages are true and they will take your word for it,” Phivolcs also said in a separate post on the Facebook page of the National Disaster Risk Reduction and Management Council in January 2019. – Michael Bueza/Rappler.com