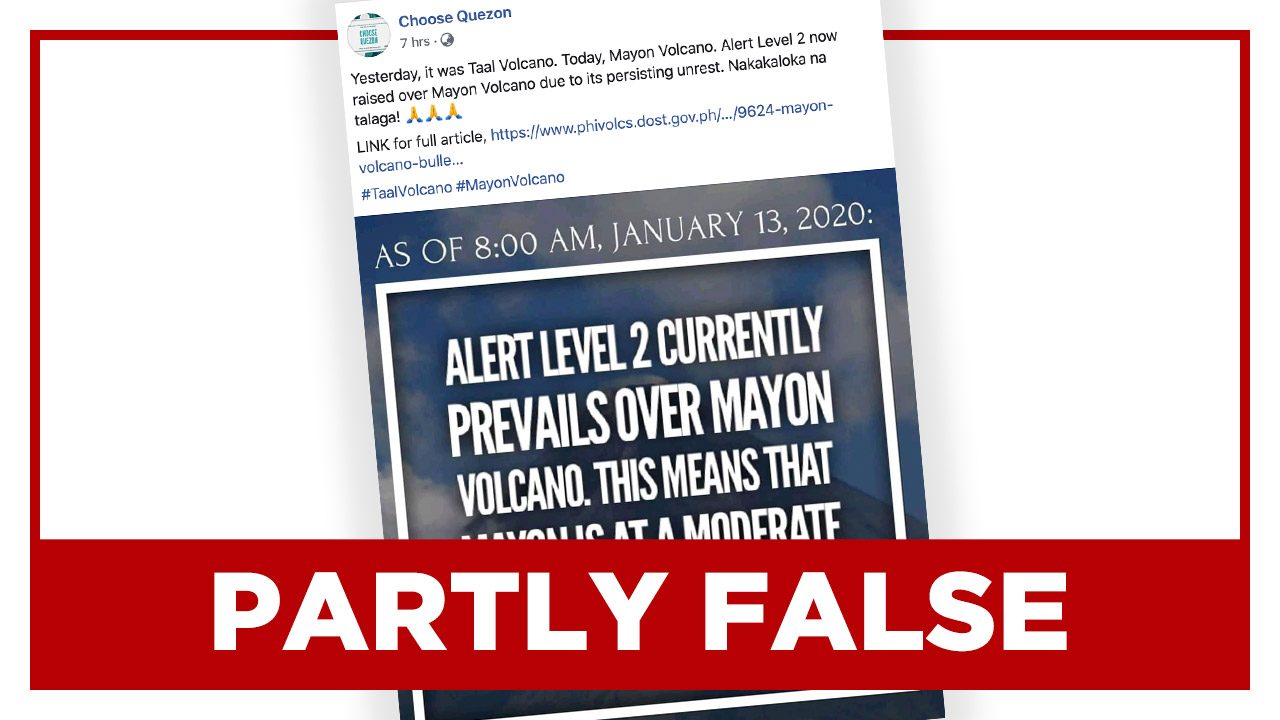 Claim: The alert status of Mayon Volcano has “now” been raised to Alert Level 2 following the phreatic or steam-blast eruption of Taal Volcano on Sunday, January 12.

It then linked to a bulletin posted on the website of the Philippine Institute of Volcanology and Seismology (Phivolcs).

Choose Quezon’s post has been shared at least 336 times, liked 15 times, and commented on 18 times as of this writing. Some Facebook pages like Ang Tubong Meycauayan also linked to or copy-pasted an Abante TNT article with the headline, “Alert level 2 tinaas na sa Mayon Volcano” (Alert Level 2 already raised for Mayon Volcano). However, the article and Abante TNT’s homepage are inaccessible as of this writing.

Readers sent these posts to Rappler for verification. Some similar claims were also picked up by Facebook’s Claim Check dashboard.

The facts: Mayon Volcano has been on Alert Level 2 since March 29, 2018, and this has remained unchanged, even after Taal spewed ash on Sunday, January 12.

“Matagal nang alert level 2 ang Mayon (It has been under Alert Level 2 for a long time),” said Mariton Bornas, head of the Volcano Monitoring & Eruption Prediction Division of Phivolcs.

“We were actually going to propose to lower it down kasi medyo matagal na (because it’s been a while),” she added.

The last significant change in alert status for Mayon was on January 22, 2018, when it was raised to Alert Level 4 after it spewed a giant ash column. Alert Level 4 means that hazardous eruption was imminent or possible “within days” at that time.

However, the status was soon lowered to Alert Level 3 on March 6, then to Alert Level 2 on March 29 after a “general decline in unrest.” It has stayed at that level since then, despite some flare-ups like in December 2018.

Meanwhile, as of this writing, Taal Volcano is under Alert Level 4, which also means it is showing signs that hazardous eruption is possible within days. – Michael Bueza/Rappler.com