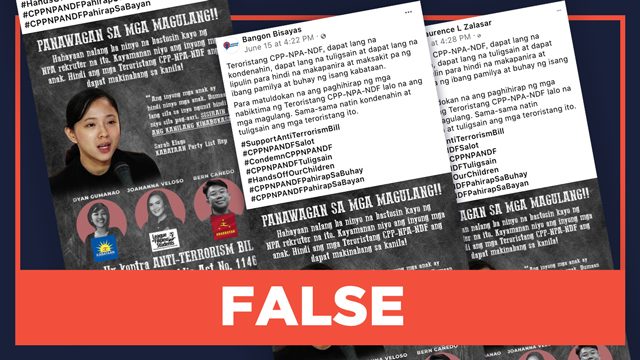 Facebook Twitter Copy URL
Copied
Kabataan Representative Sarah Elago did not say this quote, which was already falsely attributed to her in the past

Claim: Kabataan Representative Sarah Elago said children are not their parents’ property, and threatened to destroy their future.

Facebook page Bangon Bisayas posted a graphic with a photo of Elago as well as photos of Dyan Gumanao, Joahanna Veloso, and Bern Cañedo, 3 of the activists arrested on June 5 during a rally in Cebu City against the anti-terror bill.

(Calling all parents! Will you allow this NPA recruiter to disrespect you? Your children are your wealth. The CPP-NPA-NDF terrorists should not be the ones benefiting from them!)

The graphic attributed the following quote to Elago: “Ang inyong mga anak ay hindi ninyo mga anak. Dumaan lang sila sa inyo ngunit hindi niyo sila pag-aari. Sisirain ko ang kanilang kinabukasan (Your children are not your children. They only went through you but they are not your property. I will destroy their future).”

Bangon Bisayas posted the graphic with the caption, “Teroristang CPP-NPA-NDF, dapat lang na kondenahin, dapat lang na tuligsain at dapat lang na lipulin para hindi na makapanira at maksakit (sic) pa ng ibang pamilya at buhay ng isang kabataan (Terorrists CPP-NPA-NDF must be condemned, must be attacked, and must be eradicated so that they will no longer be able to destroy and hurt any more families and a young person’s life).”

A Facebook search showed that the graphic was also posted by Facebook user Mark Laurence L Zalasar with the same caption.

The facts: Elago did not say this quote, which was already falsely attributed to her in the past. It is a loose translation of a few lines from Kahlil Gibran’s poem “On Children” from his book The Prophet. The lines read:

“Your children are not your children.
They are the sons and daughters of Life’s longing for itself.
They come through you but not from you,
And though they are with you yet they belong not to you.”

None of Elago’s statements have included this quote. It was also not reported by any news organizations. Rappler also reached out to Bangon Bisayas to ask for their source, but received no response.

Elago and the Kabataan party-list denied the claim then through their Twitter accounts.

Elago has been made the subject of false claims several times in the past. Rappler earlier debunked another fake quote attributed to Elago claiming that she called for People Power. Another false post claimed she tested positive for coronavirus. – Loreben Tuquero/Rappler.com