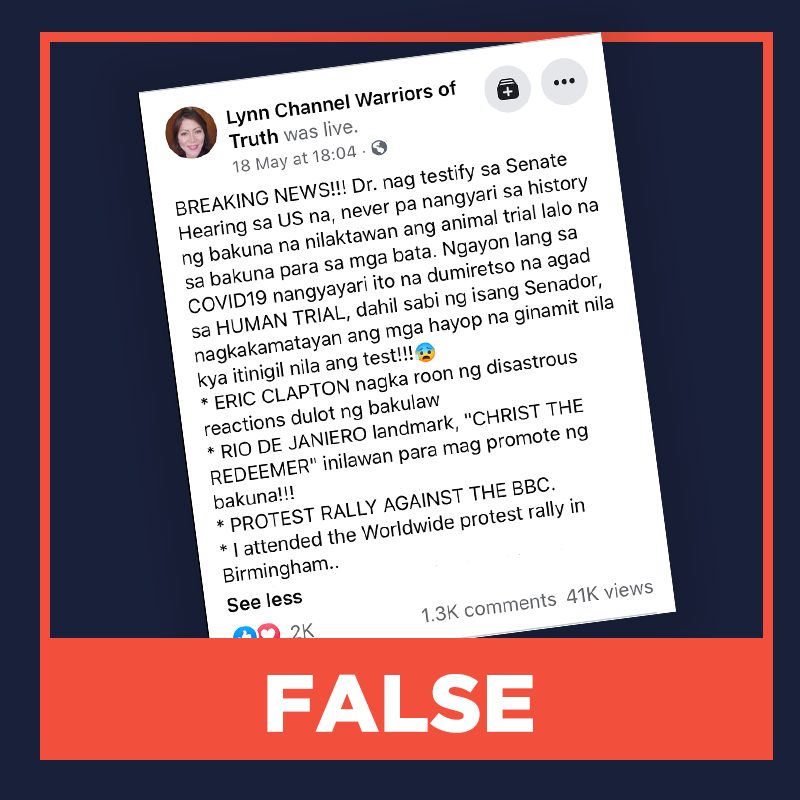 Facebook Twitter Copy URL
Copied
Animal testing was done for the COVID-19 vaccines by Pfizer, Moderna, and Johnson & Johnson, each of which has emergency use authorization in the US. It was also done for the vaccines by AstraZeneca and Novavax.

On Tuesday, May 18, Facebook page “Lynn Channel Warriors of Truth” posted a video, claiming that animal testing was skipped for COVID-19 vaccines.

The video encouraged viewers to spread a clip that was played at around the 32:50 mark. The clip showed a United States Senate hearing on May 6, where there was an exchange between Texas State Senator Bob Hall and Texas-based pediatrician Angelina Farella. It was presented with a black background with the white text “COVID Jab: They Skipped all Animal Trials Because All Animals Were Dying & Went Directly to People” and “Texas State Senate, May 2021.”

Hall and Farella talked about the safety of COVID-19 vaccines and discussed animal testing being allegedly skipped for the vaccines.

The claim that animal testing was skipped for COVID-19 vaccines is false.

As of writing, the vaccine brands given an emergency use authorization (EUA) by the US Food and Drug Administration (FDA) are the following: Pfizer-BioNTech, Moderna, and Janssen (by Johnson & Johnson).

Other vaccines, which were not given EUA in the US, were also tested on animals.

For example, the Public Assessment Report Authorisation for Temporary Supply by the Medicines and Healthcare Products Regulatory Agency (MHRA) in the United Kingdom acknowledged that animal testing was done for the AstraZeneca COVID-19 vaccine.

As for the Novavax COVID-19 vaccine, a clinical trial protocol document of its Phase 3 trial in the United Kingdom shows that animal testing was done as well. Large-scale (Phase 3) clinical trials for both the AstraZeneca and Novavax vaccines had been planned or had been ongoing in the US as of February 27, according to the US Centers for Disease Control and Prevention.

Also, from the descriptions in the documents of the animal testing done, no evidence can be found that the tests were skipped because of the deaths of animals.

The claim by Hall was fact-checked by several organizations already, such as Politifact, FactCheck.org, USA Today, and Health Feedback.