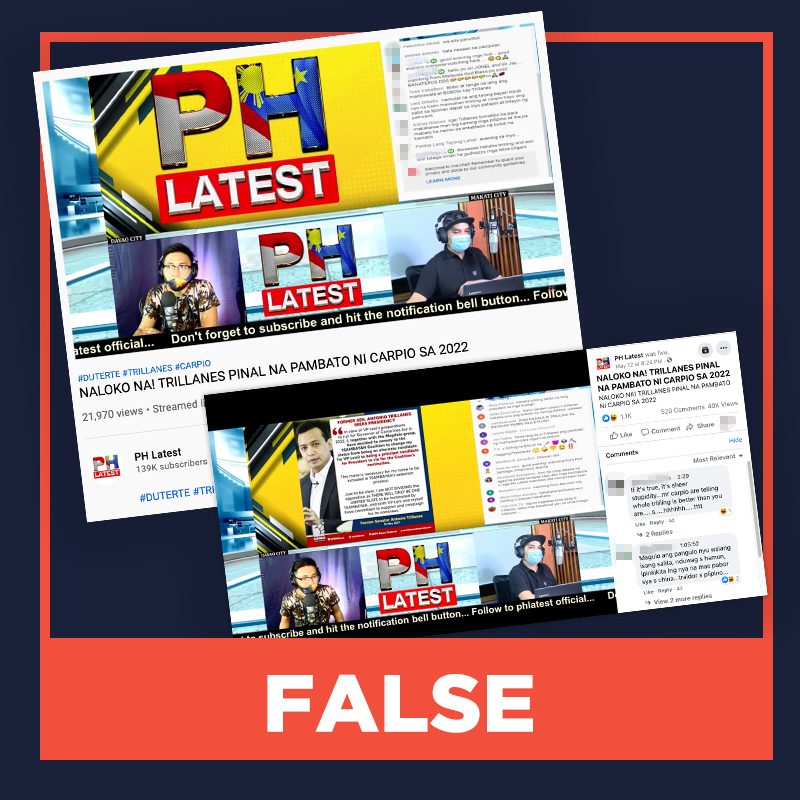 Facebook Twitter Copy URL
Copied
As of May 17, neither retired justice Antonio Carpio nor the 1Sambayan coalition has announced a presidential candidate for 2022

Former senator Antonio “Sonny” Trillanes IV is the “final bet” of retired Supreme Court justice Antonio Carpio for president in the 2022 elections, according to two videos uploaded by “PH Latest” on Facebook and YouTube.

“PH Latest” titled its videos, “NALOKO NA! TRILLANES PINAL NA PAMBATO NI CARPIO SA 2022 (This is trouble! Trillanes is Carpio’s final bet for 2022).” The videos were live streamed both on Facebook and YouTube on Wednesday, May 12.

Neither Carpio nor the 1Sambayan coalition has announced a presidential candidate for 2022 as of Monday, May 17. 1Sambayan is an anti-Duterte coalition launched in March. Carpio is the lead convenor.

The false videos were uploaded after Trillanes announced on May 12 that he would gun for the presidency if Vice President Leni Robredo doesn’t run in 2022, citing her possible plans to run as Camarines Sur governor instead. He also said he would “step aside” if ever Robredo decides to run for president.

In an interview with ABS-CBN News Channel’s Matters of Fact on Monday, 1Sambayan convenor and lawyer Howard Calleja said that “nothing has changed” with its pool of possible nominees for 2022. The coalition earlier said that it is considering five possible presidential or vice presidential candidates, including Trillanes, Robredo, senators Nancy Binay and Grace Poe, and Manila Mayor Isko Moreno.

Meanwhile, Robredo said on her radio show Biserbisyong Leni on Sunday, May 16, that she has not decided yet and asked those who assume that she’s running for governor to not get ahead of her.

Rappler spotted the videos from “PH Latest” via social media monitoring tool CrowdTangle. As of writing, these videos have over 61,000 combined views. – Pauline Macaraeg/Rappler.com