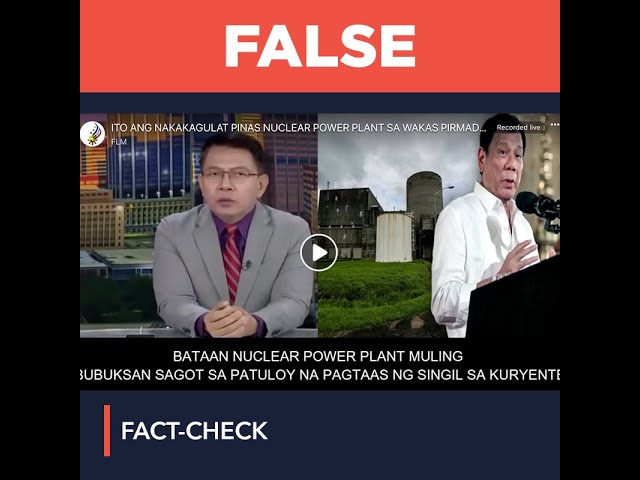 Facebook Twitter Copy URL
Copied
President Rodrigo Duterte signed an executive order for a study on nuclear energy, and not to open or reopen a nuclear power plant

The Bataan Nuclear Power Plant will be reopened.

A screenshot of the video thumbnail was posted on the page “SOLID Duterte” on August 27. It was flagged by Facebook’s fact checking tool Claim Check as potentially misleading.

EO 116, which was signed on July 24, calls for a study of a national position on a nuclear energy program (NEP) and establishes the NEP inter-agency committee (NEP-IAC), headed by the Department of Energy.

Among the NEP-IAC’s functions is to review existing facilities for nuclear energy such as, but not limited to, the Bataan Nuclear Power Plant.

The NEP-IAC has not made any recommendations as of writing. The EO states that the NEP-IAC must report its findings no later than January 2021, or within 6 months from the time the order takes effect.

Duterte had said in the past that pursuing nuclear energy might be unconstitutional. Article II Section 8 of the Constitution states: “The Philippines, consistent with the national interest, adopts and pursues a policy of freedom from nuclear weapons in its territory.”

In 2016, then-Senate president Aquilino “Koko” Pimentel III said that it would be preferable for the government to pass a law before pursuing nuclear energy because of the expected large expenditure and “controversial nature of the decision.”

This claim was also fact checked and rated as misleading by Agence France-Presse Philippines on Wednesday, September 2. – Vernise Tantuco/Rappler.com