FALSE: Briones says classes will resume because ‘we will all die anyway’ 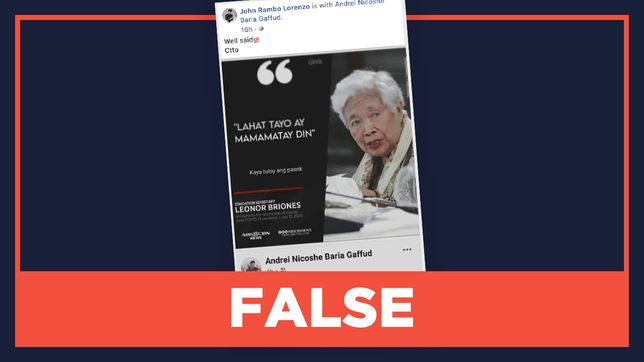 Facebook Twitter Copy URL
Copied
Education Secretary Leonor Briones did not say this. The graphic is an altered version of an ABS-CBN quote card

Education Secretary Leonor Briones said that everyone will ultimately die, so classes will resume regardless of potential casualties due to the COVID-19 pandemic.

Facebook page Pilipinoy Trends posted this graphic on Tuesday, July 21, which attributed the following quote to Briones: “Lahat tayo ay mamamatay din, kaya tuloy ang pasok.” (We will all ultimately die anyway, so classes will push through as scheduled.)

The graphic’s caption read, “So, bakit ho tayo mag-aaral kung ang point niyo ho is mamamatay din naman pala? Wala ho ba kayong mga anak at apong nag-aaral, Secretary of Education?” (Why should we study if your point is we’re all going to die anyway? Don’t you have children or grandchildren who are studying, Secretary of Education?)

The graphic had the logo of ABS-CBN News and was dated July 15.

Users who shared Pilipinoy Trends’ post appeared to believe it was true, with captions such as “Mauna ka kung gusto mo (You may go first if you wish),” and “Huwag kang mandamay (Don’t bring others down with you).”

This claim was emailed to Rappler by a reader for checking. It was also brought to our attention by a member of the “Fact-checking in the Philippines” Facebook group.

Briones did not say this quote attributed to her. The graphic is an altered version of what was originally a quote card that was produced by ABS-CBN News.

Briones’ quote was taken from a meeting with President Rodrigo Duterte on July 15. She did not say that we will all die anyway or make any other reference to death. An official transcript of this meeting is posted on the PCOO website.