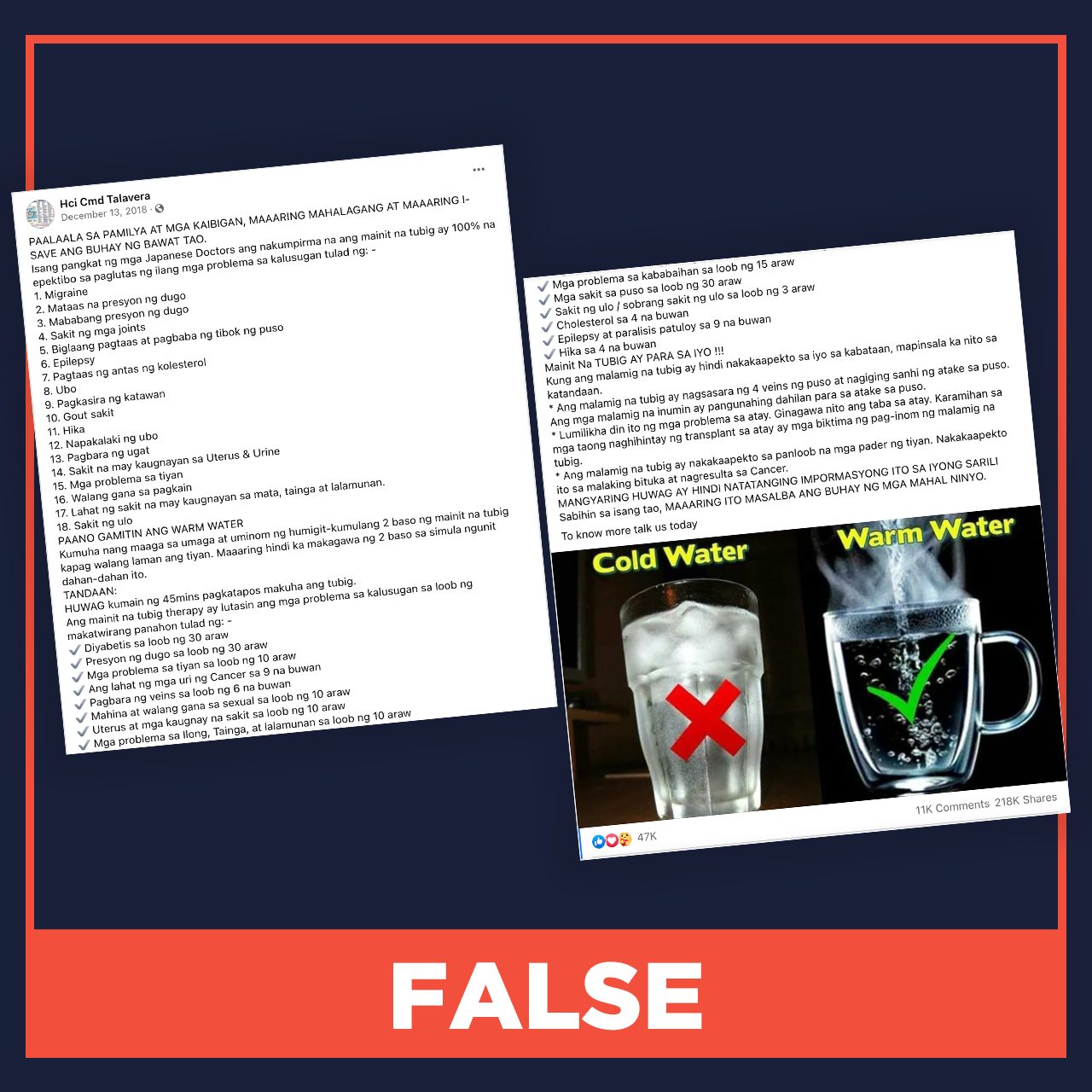 On December 13, 2018, Facebook user “Hci Cmd Talavera” claimed in a post that drinking cold water had dangerous effects on health. It said that cold water was the main cause of heart attacks, created the accumulation of fat in the liver, and even caused cancer.

The post also claimed that warm water could cure all types of cancer in 9 months. It even included instructions on when and how much warm water to drink.

As of writing, the post by “Hci Cmd Talavera” is still being shared and has over 47,000 reactions, 11,000 comments, and 218,000 shares. CrowdTangle results show other Facebook pages that have made the same claims, including “Natural Health,” “Philippine Herbal Medicine,” “Natural Beauty Results,” “PINOY ANONYMOUS,” and “The BNKT Health, HOME & Garden Journal.”

Multiple medical sources do not include drinking cold water in the list of causes of the diseases mentioned in the post. They also do not list drinking warm water as a cure for cancer.

Drinking cold beverages is not among the causes of heart attacks, according to the Centers for Disease Control and Prevention (CDC) in the United States and the National Health Service (NHS) in the United Kingdom. The CDC states that the main risk factors for heart disease are high blood pressure, high cholesterol, and smoking. Both the CDC and NHS say that the main cause of heart attacks is coronary artery disease, which is caused by buildup of plaque in the arteries leading to the heart.

The fat buildup in the liver is also not made of water or caused by water. The components of fats aren’t water molecules, but rather fatty acids which are straight-chain carboxylic acids. Carboxylic acid molecules contain carbon atoms, but water molecules don’t. The National Institute of Diabetes and Digestive and Kidney Diseases of the National Institutes of Health in the United States also does not include drinking water in its list of causes of non-alcoholic fatty liver disease.

The National Kidney and Transplant Institute in the Philippines does not include drinking cold water in its list of disease indications for liver transplantation.

As for warm water as a cure for cancer, the NCI does not include drinking warm water in its list of cancer treatment types.

In November 2019, the Agence France-Presse debunked the claim that warm or hot water can cure cancer in 9 months. It cited Bruno Falissard, a child and adolescent psychiatrist and professor of public health in France, who said that hot water isn’t scientifically proven to have the claimed health benefits. He added that water “isn’t a cure and it isn’t harmful either” within a tolerable range for the body between “0 and 40 degrees [Celsius].”

Other fact-checking organizations that debunked similar claims include the Nigeria-based International Centre for Investigative Reporting, the Africa-based PesaCheck, and the Australian Associated Press.

While the beneficial effects of warm water and harmful effects of cold water claimed in the Facebook posts were exaggerated, drinking enough water every day is still important to a person’s health. – Percival Bueser/Rappler.com