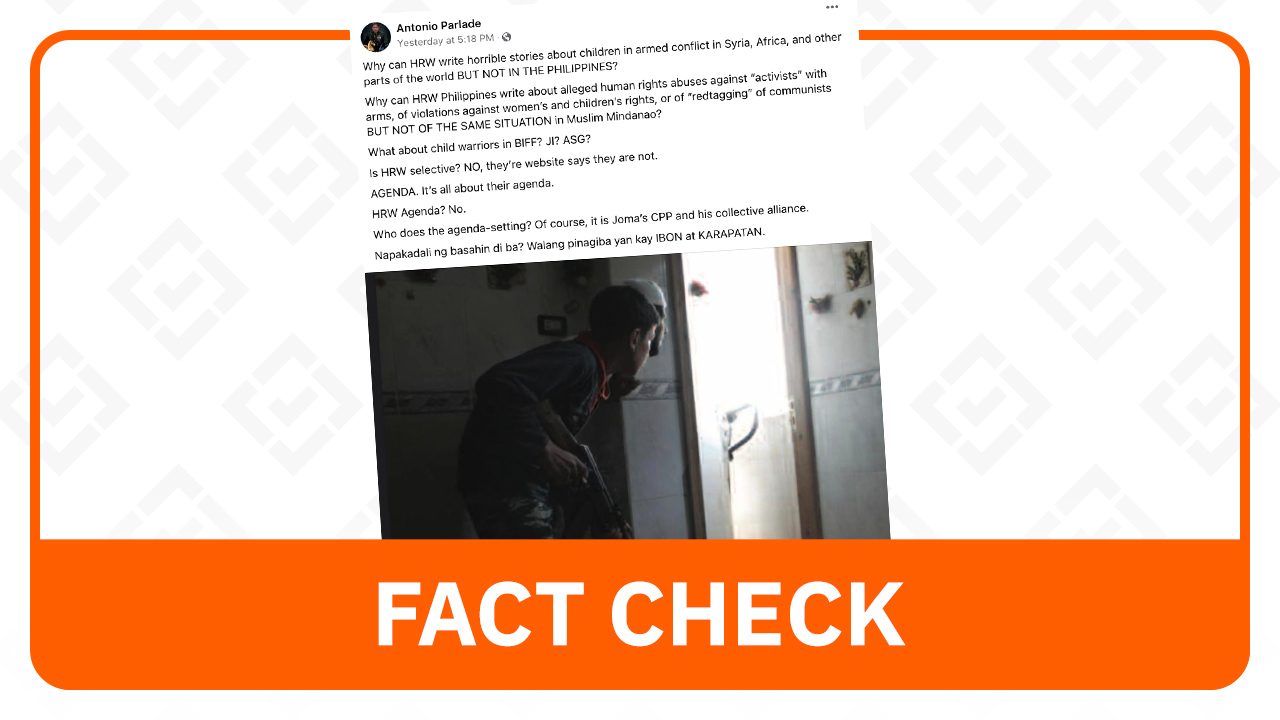 Claim: Human Rights Watch (HRW), an international non-government organization advocating for human rights, has not written about children in armed conflict in the Philippines.

Why we fact-checked this: The claim can be found in a post on November 9 in the Facebook account of retired Lieutenant General Antonio Parlade Jr., former spokesperson of the National Task Force to End Local Communist Armed Conflict (NTF-ELCAC). As of writing, the post already had 243 reactions, 5 comments, and 33 shares.

The relevant part of Parlade’s post reads: “Why can HRW write horrible stories about children in armed conflict in Syria, Africa, and other parts of the world BUT NOT IN THE PHILIPPINES?”

The bottom line: Human Rights Watch has, in fact, written at least three articles about children in armed conflict in the Philippines, contrary to Parlade’s claim that they haven’t.

2011: On October 11, 2011, HRW published “Philippines: Army Falsely Tags Children as Rebels” where it describes its investigation of an incident in which the Philippine Army publicly declared some children as rebels under the New People’s Army (NPA).

HRW reported finding enough evidence to conclude that the children’s alleged involvement with the NPA was “fabricated by the military” and added that following the release of the children, the “Philippine Army has continued to harass and intimidate the children and their families.”

In the same article, HRW pointed out that while the version of the bill it discussed is mostly praiseworthy, a section holding parents and guardians liable for their children joining an armed group “sets too low a bar for criminalization and is open to misuse and misinterpretation.” HRW proposed an amendment “only to ensure the real child soldier recruiters can be brought to justice.”

2016: An article on February 16, 2016, entitled, “Dispatches: Fighting Over Child Soldiers in the Philippines,” and written by HRW senior researcher Carlos H. Conde, also discusses the use of children in armed conflict in the Philippines, this time allegedly by the NPA.

The article cited a 2013 report to the United Nations Security Council by the Secretary-General which discussed children in armed conflict in the Philippines, including the use of child soldiers, involving the NPA as well as other organizations such as the Moro Islamic Liberation Front, the Abu Sayyaf, and the Armed Forces of the Philippines.

It also said that “the armed forces [of the Philippines] has undermined its credibility on the issue” and cited its previous October 11, 2011 article about the Philippine military’s false tagging of children as NPA.

Parlade’s red-tagging: The Facebook post by Parlade also included red-tagging of HRW: “Who does the agenda-setting? Of course, it is Joma’s CPP and his collective alliance.” He referred to Jose Ma. Sison, founder of the Communist Party of the Philippines.

Even the HRW itself has written on Parlade’s red-tagging, in its February 10, 2021 article, “Philippine General Should Answer for ‘Red-Tagging’.”

Previous fact check: Rappler has also fact-checked at least one claim made by Parlade before – the claim that Satur Ocampo, former Bayan Muna representative, was running for senator in the 2022 Philippine general elections. – Percival Bueser/Rappler.com