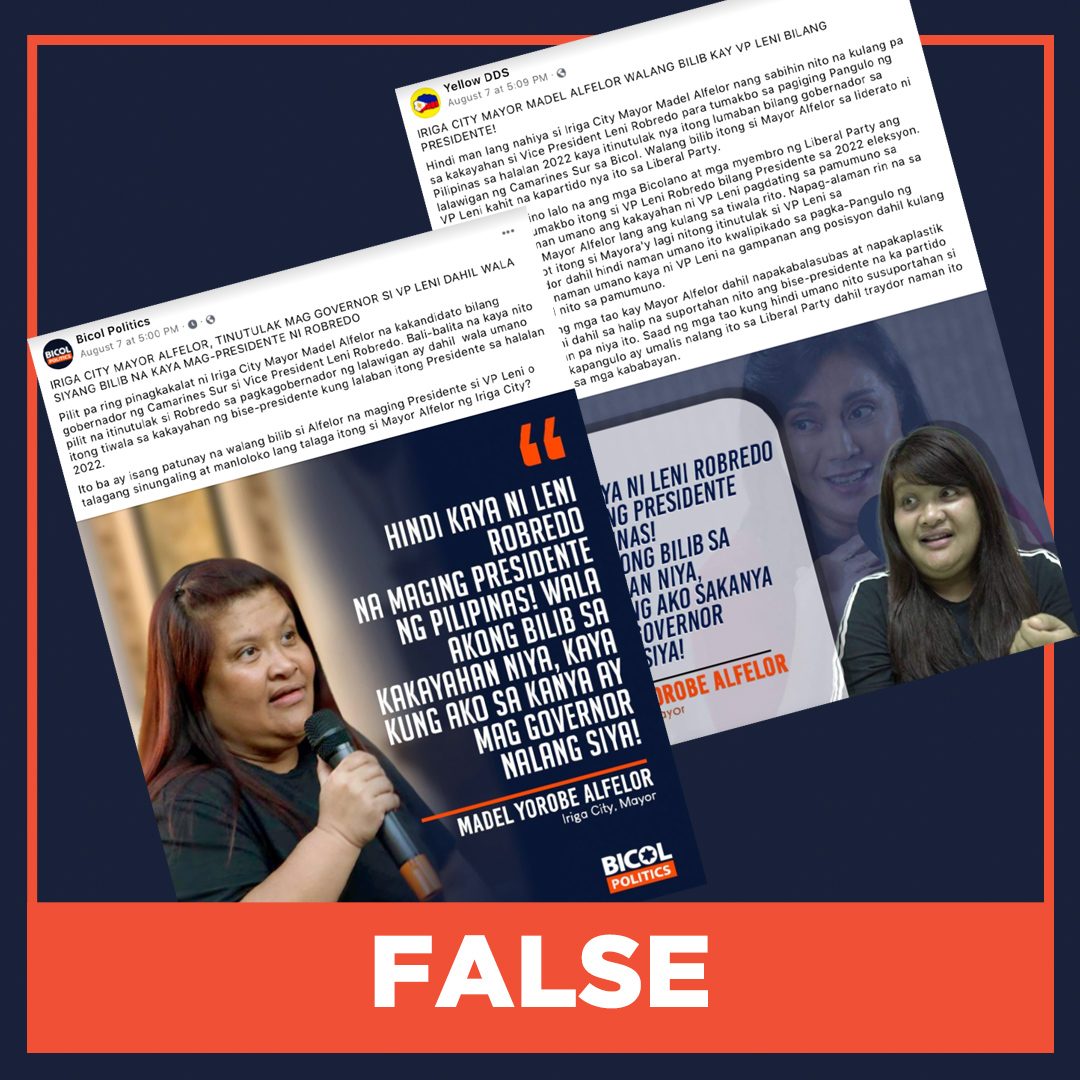 Facebook Twitter Copy URL
Copied
There are no news reports and no releases from the official Facebook page of the Iriga City government proving Mayor Madel Alfelor said the quote. The city government of Iriga also says Alfelor never released any such statement about Robredo.

Several Facebook posts have quote cards claiming Iriga City Mayor Madel Alfelor said that Vice President Leni Robredo was incapable of becoming president of the Philippines, and suggested that she should become governor instead.

The quote cards are notably found in posts published on August 7 by Facebook pages “Yellow DDS” and “Bicol Politics,” which have gained about 47,000 reactions, 11,000 comments, and 2,500 shares combined, as of writing.

Other sources of the quote cards include posts by the Facebook pages “Alon Calinao Dy,” “La solidaridad,” and “SOLID Duterte,” as well as in the Facebook groups “DUTERTE ANG BOSES NG MASA” and “PHILIPPINE FEDERAL MOVEMENT INTERNATIONAL.”

There are no news reports and no releases from the “Iriga City Official” Facebook page that prove Alfelor said the quote.

Moreover, when asked about the quote, the city government of Iriga emailed Rappler a statement, saying, “The City Mayor of Iriga never released any statement stating that our Honorable Vice President Leni Robredo is not capable of running as President of the Republic of the Philippines.”

The statement continues: “In fact, we recently released a statement on our official Facebook page thanking the good VP for all her efforts regarding the IrigaVax Express held in our city.”

It referred to an August 8 post in the “Iriga City Official” Facebook page in which Alfelor thanked Robredo for latter’s guidance in the IrigaVax Express project, where 6,102 doses of COVID-19 vaccines were given on August 6 and August 7.

The statement adds: “The City Mayor and the people of Iriga will support Vice-President Leni Robredo in whatever journey she will take in the future.”

Rappler has made several fact checks featuring Robredo before, about statements attributed to her, statements others allegedly made about her, or claims about her, such as the following: