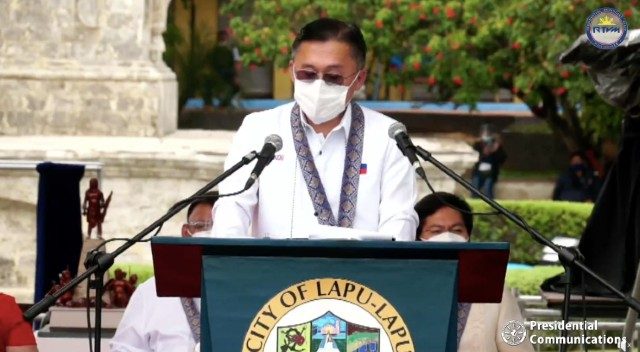 QUINCENTENNIAL. Senator Bong Go speaks at the quincentennial of the Battle of Mactan. Screengrab from the Presidential Communications and Operations Office

Facebook Twitter Copy URL
Copied
While some say Lapulapu may have been from Borneo or Sulu, there is no historical record yet proving this 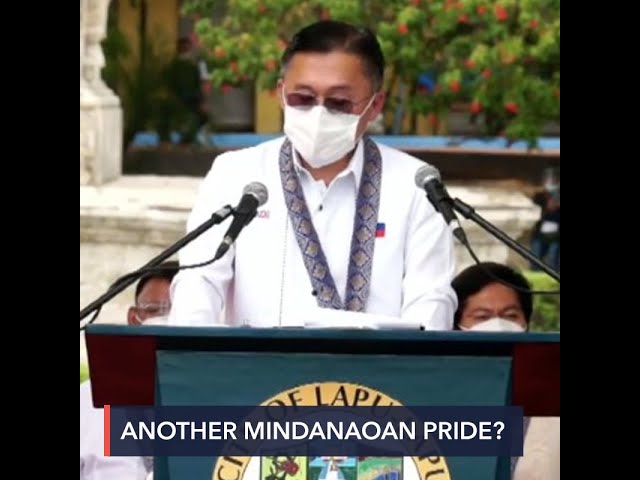 At the 500th anniversary of the Battle of Mactan on Tuesday, April 27, Senator Bong Go claimed that Lapulapu, the chieftain of Mactan, was actually from the Tausug ethnic group of Mindanao.

(According to one version of history that was studied by expert Abraham Idjirani, the former East King of Sulu, who was watching the 707 islands of the Philippines, ordered Lapulapu to observe why there were foreigners arriving in the islands, including Mactan.) 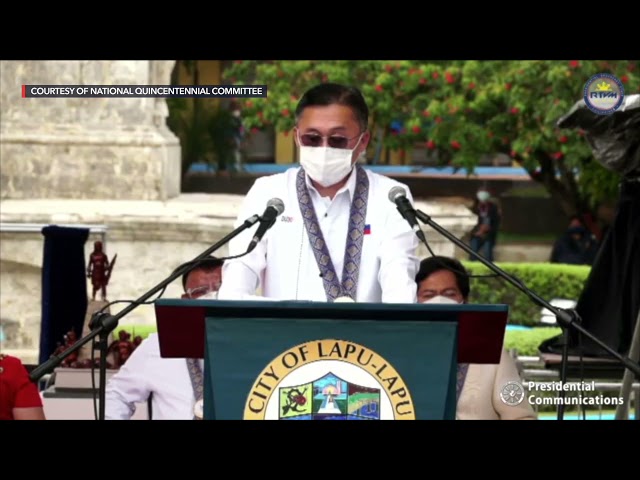 (From Sulu, many fighters joined the Tausug Lapulapu on his boat; they were greeted by the men of Ferdinand Magellan and the Battle of Mactan ensued – where Magellan died and Lapulapu was hailed a hero for defending an island of the Philippines. Mindanaoans are part of that victory.)

There is no historical evidence to prove that Lapulapu came from Sulu.

Rappler asked Cebu-based anthropologist Jobers Bersales of the University of San Carlos (USC) where Lapulapu was from.

He also wrote in a public Facebook post after the event, in Cebuano, “Why don’t you folks believe Lapulapu is from Mactan? Why does he have to be Tausug or Bornean? Do you view people from Mactan as cowards?”

As for the “expert” Abraham Idjirani cited in Go’s speech, he was not a historian, but the spokesperson of the Sultanate of Sulu.

Idjirani was frequently quoted in news reports during the 2013 Lahad Datu standoff, where armed men of Jamalul Kiram III, one of the claimants to the throne of the Sultanate of Sulu, went to Sabah and engaged Malaysian security forces in an armed standoff.

However, at the time Portuguese explorer Ferdinand Magellan got lost in Cebu, the territory we now know as the Philippines did not yet exist.

There is currently no historical evidence to support the claim of Go that a king (or sultan) of Sulu sent Lapulapu to supposedly check on foreigners in Mactan in 1521.

Neither was Mactan a part of the Sultanate of Sulu.

According to a 2019 Cebu Daily News column by Bersales, Italian scholar and explorer Antonio Pigafetta, who kept the only written primary record of Lapulapu’s existence, was probably not interested in the genealogies of native chiefs at the time.

“Then and now we recall kinship by saying ‘taga’ (from) or ‘kang’ (of) or ‘anak ni’ (son/daughter of) or ‘apo ni’ (grandson/daughter of), ‘igsoon ni’ (brother/sister of), etc,” Bersales said. “Without the contraption of a family name, try building your family tree using those qualifiers and I wish you the best of luck.”

Aside from the Battle of Mactan, there is little else known about Lapulapu’s origins except that he was a chieftain of Mactan.

“Given this vacuum, therefore, came attempts at filling it up by inventing history, cloaking it as folklore handed down from one’s grandparents or, in the case of the story of the 10 Bornean datus, from an old trunk full of papers,” the USC anthropologist and historian explained.

Bersales also said that a similar claim, in which Lapulapu was actually from Borneo, is not backed by documentary evidence.

While some communities in Mindanao may believe Lapulapu was actually a Muslim from there, based on oral tradition, there has been no historical evidence presented yet to back up this claim.

Bersales has pointed out in several columns and forums that much of what we know of Lapulapu is based on folklore and not on actual historical record.

Fellow historian Ambeth Ocampo echoed this in a 2018 Inquirer column.

“What Filipinos have lost in the European historical record, we have regained with a vengeance through tradition and oral lore that make Lapulapu not just a hero of Mactan or Cebu, but a national hero for all Filipinos,” he said. – Rappler.com

Editor’s Note: An earlier version of this story inadvertently described the Sultanate of Sulu as “defunct.” We have corrected this error by deleting this adjective.