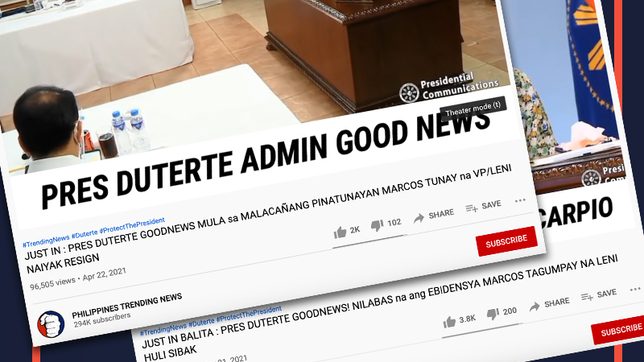 On April 21 and 22, Youtube channel “PHILIPPINES TRENDING NEWS” uploaded two videos claiming that the Malacañang Palace (Office of the President) has proven and submitted evidence that former senator Bongbong Marcos won the 2016 vice presidential elections. As of Tuesday, April 27, the videos had a combined total of 278,956 views.

The videos contain excerpts from a 2018 Facebook Live video where Marcos discusses his electoral protest against Vice President Leni Robredo with blogger Rey Joseph “RJ” Nieto, also known as “Thinking Pinoy” on Facebook. In the videos, Marcos talks about updates on his electoral protest. Marcos does not make mention of any supposed evidence in his favor from Malacañang.

Sitting as the Presidential Electoral Tribunal (PET), the Supreme Court dismissed Marcos’ 2016 electoral protest in February 2021 and Malacañang Palace has not released any evidence related to it – and it shouldn’t, since it’s not a party to the case. The Palace in fact said it respects the unanimous decision of the Court to junk the protest.

According to the ruling released by the PET, Marcos failed to provide evidence for fraud and did not sufficiently justify the annulment of elections in Lanao del Sur, Basilan, and Maguindanao – the 3rd and final cause of action in his filed protest. The PET said that even if elections in the 3 Mindanao provinces were annulled, Robredo would still lead by a 15,310 vote margin.

Further, Malacañang’s stand on the matter was relayed by Presidential Spokesman Harry Roque who said: “That is the decision of the Supreme Court. We respect that and we respect also that the camp of Senator Bongbong Marcos has a further remedy of moving for reconsideration.”  – Therese Litonjua/Rappler.com