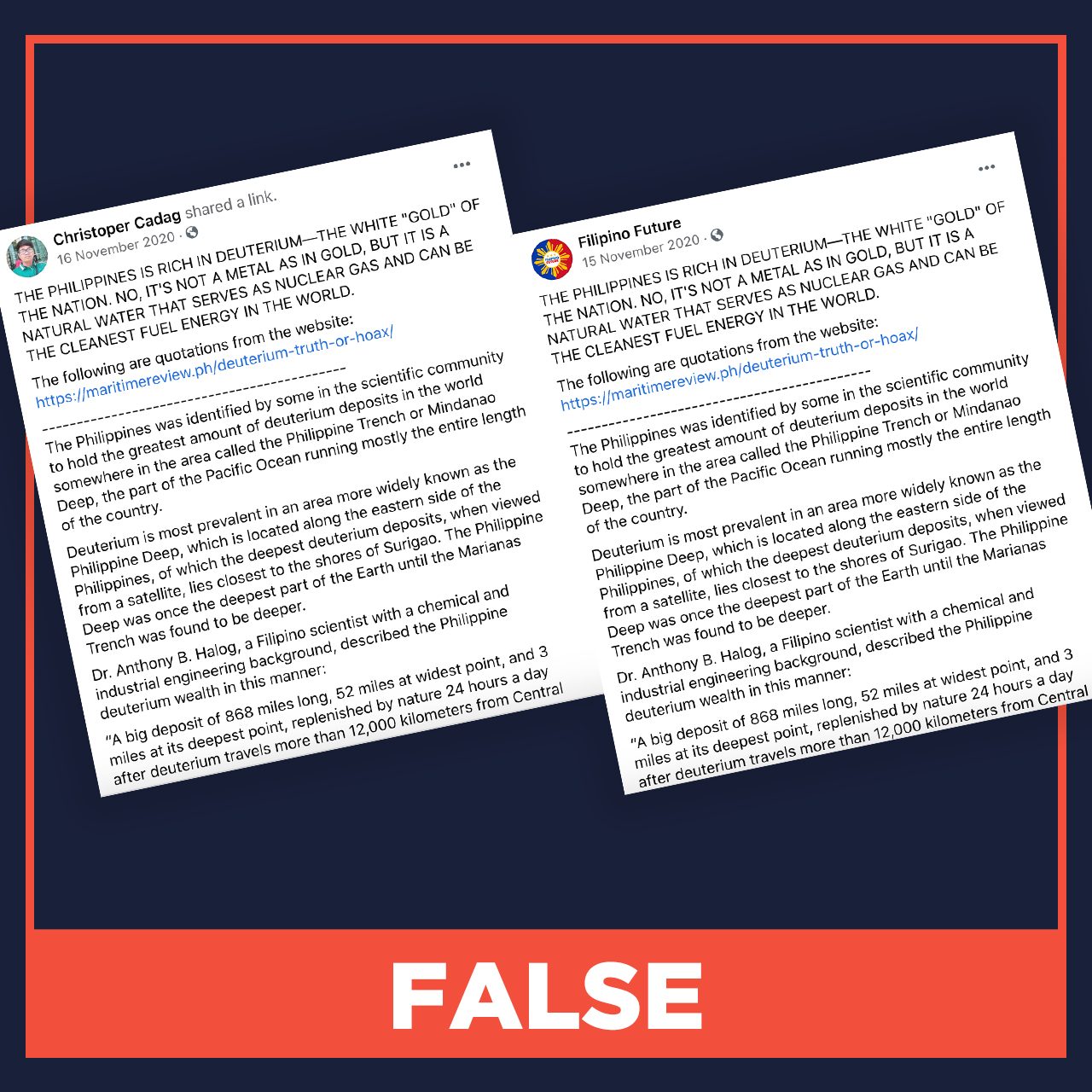 Facebook Twitter Copy URL
Copied
Deuterium isn’t any kind of water; it’s an isotope of hydrogen. Also, there is no reason to suppose that the Philippines is rich in deuterium.

Facebook posts in the page “Filipino Future” and in the group “MARCOS PA RIN” on November 15 and 16, 2020, respectively, claim that the Philippines is rich in deuterium. They said: “The Philippines is rich in deuterium – the white ‘gold’ of the nation. No, it’s not a metal as in gold, but it is a natural water that serves as a nuclear gas and can be the cleanest fuel energy in the world.”

Claims about deuterium in the Philippines have been widespread in one form or another since the 1980s.

These claims are false. Deuterium is not a kind of “natural water” or “water.” Also, the Philippines is not rich in deuterium. 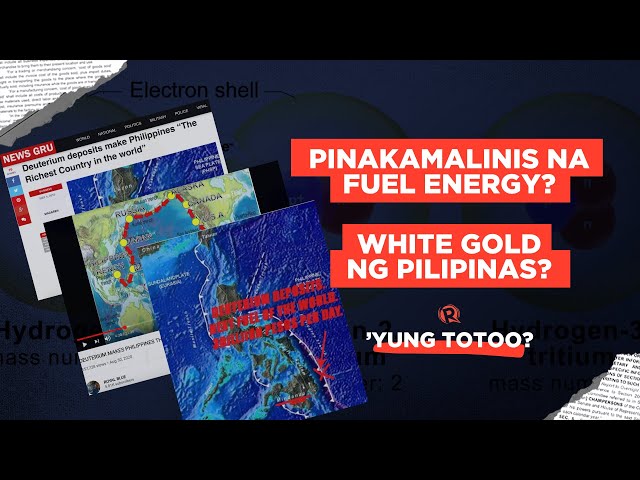 The most abundant form of hydrogen is called protium, whose atoms contain no neutrons, while atoms of deuterium have one neutron each.

Deuterium occurs in trace amounts in nature; about 1 in 6,400 hydrogen atoms in ocean water are in the form of deuterium. Nevertheless, according to the Philippine Nuclear Research Institute (PNRI), there are very slight though detectable differences in deuterium concentrations from one place to another, which make deuterium useful as a tracer. Deuterium is a fuel in nuclear fusion reactions, though as of now using nuclear fusion as a source of power is not yet commercially viable.

The concentrations of isotopes like deuterium among the deep ocean waters of the world are practically uniform, so there is no reason to suppose that the Philippine Deep or any deep body of water can be regarded as rich in deuterium or be called a deuterium deposit.

There are a number of sources that support this fact. One is a 2012 reference book by Russian nuclear geophysicist, engineering geologist, and hydrogeologist V. I. Ferronsky. The scientist cites several research results that “ocean water at a depth of more than 500 meters is homogeneous in isotopic composition.”

A 1985 journal article by Bragi Arnason contains the following passage: “The isotopic composition of sea water is relatively uniform throughout the oceans of the world.” Arnason is the director of the University of Iceland’s Research Centre in Hornafjörður.

According to the International Association for the Properties of Water and Steam, a nonprofit association, “The isotopic composition of deep offshore ocean water is remarkably uniform across the Earth.”

In an email to Rappler, the PNRI also cited a 1968 study by Yoshio Horibe and Nobuko Ogura in the Journal of Geophysical Research, “Deuterium Content as a Parameter of Water Mass in the Ocean.” The study has a graph showing that, in fact, deuterium concentration detectably decreases as one goes deeper under the Pacific Ocean where the Philippines is situated.

Claims concerning deuterium in the Philippines have been debunked as far back as the 1980s.

However, the originator of the spurious deuterium claims circulating online today is unanimously agreed to be Cesar Escosa, whom the late physicist Roger Posadas described as a “pseudoscientific swindler” whose claims constitute “deuterium delirium.” Posadas was chancellor of the University of the Philippines (UP) Diliman from 1993 to 1996 and the first dean of the UP Diliman’s College of Science from 1983 to 1993.

Outside of the deuterium claims, Escosa once filed certificates of candidacies for president and for senator, but was denied both times. The Commission on Elections ruling stated that Escosa was a certified public accountant, not a scientist.