FALSE: Robredo is a member of CPP-NPA-NDF Facebook Twitter Copy URL
Copied
Vice President Leni Robredo is not a CPP-NPA-NDF member. There are also no reports of Robredo thanking defenders of the NPA. 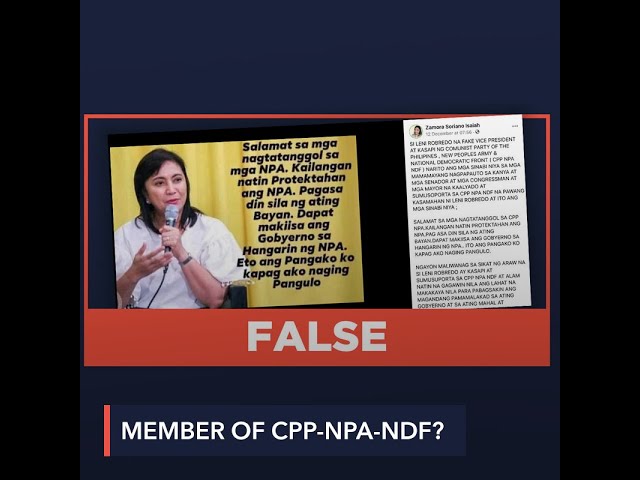 A Facebook post on December 12 in the group “Rody Duterte Solid(Duterte-Duterte2022)” alleged that Vice President Leni Robredo is a member and supporter of the Communist Party of the Philippines (CPP), the New People’s Army (NPA), and the National Democratic Front (NDF).

(Thanks to the defenders of the NPA. We have to protect the NPA. They are also the hope of our nation. Government should align with the objectives of the NPA. These are my promises if I become president.)

There is no proof of Robredo’s alleged membership in the CPP-NPA-NDF and no official reports of it by legitimate news outlets.

In an email to Rappler from the Office of the Vice President (OVP), Robredo’s spokesperson Barry Gutierrez said, “To be clear, VP Leni is not and has never been a member of the CPP-NPA-NDF.”

There is also no record in news reports or speeches of Robredo saying the things attributed to her in the quote card. She also denied saying this specific quote in a Facebook post on December 12.

The OVP also denied entering peace talks with the NDF. In a December 15 post on Robredo’s official Facebook page, Gutierrez said: “The Office of the Vice President is not engaged, and has no intention of engaging, in direct peace negotiations with the NDF. While peace talks are crucial in resolving this decades long conflict, they must be conducted through official, formal channels that the OVP is not part of.”

The post on “Rody Duterte Solid(Duterte-Duterte2022)” also claims that Robredo will legalize the illegal drug called shabu (methamphetamine). Rappler has fact checked a similar claim before. Robredo was also misquoted in 2017 about decriminalizing drug use.

Rappler has fact-checked multiple claims about Robredo before as well as claims made by Canceran. – Percival Bueser/Rappler.com