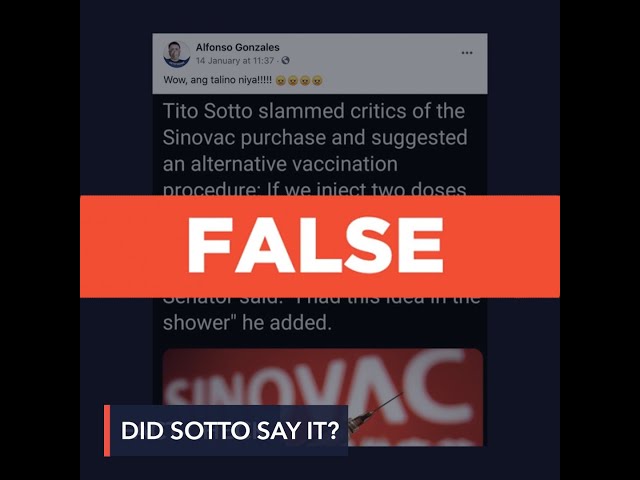 Senate President Vicente Sotto III allegedly said that receiving two doses of the Sinovac COVID-19 vaccine will have an efficacy rate of 100%. This is according to at least two Facebook posts, which shared a screenshot of a tweet with this claim.

The screenshots of the tweet say: “Tito Sotto slammed critics of the Sinovac purchase and suggested an alternative vaccination procedure: ‘If we inject two doses of Sinovac per 50% efficacy it would make 100%. That is better than Biontech/Pfizer with 96%,’ the Senator said. ‘I had this idea in the shower,’ he added.”

The Philippines signed a deal for 25 million doses of CoronaVac, the COVID-19 vaccine of Chinese firm Sinovac, as confirmed by vaccine czar Carlito Galver Jr on January 13. A Brazilian trial reportedly found that the vaccine was only 50.4% effective at preventing symptomatic infections.

Musician Jim Paredes commented on the tweet, saying that the tweet had to be a joke. @DuterteWatchdog said in response: “Of course. But that so many believe it tells a lot about the trust in the Senate president.”

Despite its clarification, the anti-administration Twitter account “Duterte Watchdog presents” does not describe itself as a satire page in its Twitter bio. The Facebook posts also do not say that the quote is meant to be satirical.

Sotto also denied the claim through his Facebook page on January 14. In his post, he called out people who spread disinformation amid the pandemic: “Sa kalagitnaan ng pandemya, marami pa rin ang nagkakalat ng FAKE NEWS at maling impormasyon para lalong lituhin ang ating mga kababayan.” (Amid the pandemic, there are still many people who are spreading fake news and false information to further confuse our people.)

His post included a screenshot of the tweet from @DuterteWatchdog but with the words “FAKE NEWS” written over it.

There is no record in news reports or speeches of Sotto suggesting that two doses of the CoronaVac, which has a 50% efficacy, would result in 100% efficacy.

The Butantan biomedical center of Sao Paolo, Brazil, partnered with Sinovac to test and produce CoronaVac. On Tuesday, January 12, Brazilian researchers said the vaccine was 50.4% effective at preventing symptomatic infections. Trials conducted in Indonesia yielded a 65% efficacy while trials in Turkey yielded a 91.25% efficacy.

Vaccination with CoronaVac requires two doses. A 100% efficacy rate would therefore be impossible as two doses of CoronaVac is required to achieve its 50.4%-91.25% efficacy. Two doses are also required for vaccines developed by AstraZeneca, Moderna, and Pfizer/BioNTech. – Jerome Sagcal/Rappler.com

Editor’s note: This fact check was previously rated as satire. This was corrected because the Facebook posts that contained the claim did not identify as satire.