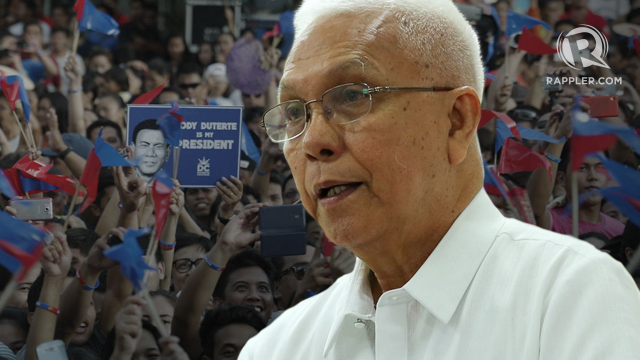 He seeks to establish a KP unit in each of the country’s barangays, envisioned to become a vehicle to bring government services down to the ground. But its bigger role, it appears, is to form a critical mass that will protect the president as he pursues radical reforms.

The organization appears to be growing fast. In Cebu, KP drew a big crowd when it was launched in October. In Cavite, the Revilla political clan threw its support behind the group. On Facebook, various accounts of KP regional organizations are cropping up. In Mendiola recently, a group that introduced itself as KP sought to defend Duterte’s decision to give Philippine dictator Ferdinand Marcos a hero’s burial.

In his tours, Evasco riles up Duterte’s supporters, telling them about supposed destabilization plots against the President. He says they come from groups that will lose power when the government institutes reforms.

He singles out the generals supposedly involved in the illegal drug trade, businessmen who resent the drive against contractualization, and businessmen with interests in the US.

The group also awaits the endorsement of Duterte himself, through an executive order creating the Office of Participatory Governance that will formally link government with KP’s members nationwide.

“Said movement hopes to deepen and widen the change in our society and government, and to fight against the elements sabotaging this call for change. The movement desires a continuous change for the welfare of the Filipinos even after the term of President Duterte,” says a KP document laying down instructions to its leaders on how to organize in the barangays.

The guide was not independently verified by KP, but its contents echo interviews Rappler conducted with KP members and sources who are privy to Evasco’s plans.

The KP document was sent to Rappler by two separate sources – one who supports KP and another source who is worried that KP is a strategy of leftists in the Duterte Cabinet to bring the country closer to the extreme left.

Evasco is a former rebel priest who was detained during Martial Law. Rappler reached out to him, but he did not respond to our text questions.

The direction of KP remains unclear at this point, but the involvement of politicians raises questions about the future of the ruling political party Partido Demokratiko Pilipino-Lakas ng Bayan (PDP-Laban) that launched Duterte’s presidential bid and is now ruling both houses of Congress.

Evasco has entertained the idea of turning KP into a political party that will field its own candidates in the next elections, according to a source who has heard the Cabinet Secretary speak about his plans.

“There is a need to produce excellent, experienced and patriotic leaders who will join the local and national elections. There should be more people like President Duterte, who is a socialist in all levels of governance,” reads the KP guide.

Duterte had his own Mayor Rodrigo Roa Duterte for President Movement, which started calls for his candidacy, but the organization was not developed in time for the elections. Its members joined PDP-Laban.

“My best hopes go to Mr Evasco’s move to create a new party, perhaps he is not comfortable with PDP-Laban’s ideological direction,” Pimentel told the Philippine Star.

PDP-Laban, a political party that has been fledgling for years, grew overnight as expected after Duterte’s victory. In a country where no political party system exists, Filipino lawmakers have been habitual turncoats, jumping to the party of the incumbent president in the hope of getting more favors from Malacañang. Transactional politics rules.

“KP is not the initiative of the party so ask the people behind the KP,” he told Rappler when asked about it. “We are more formal. We are a political party. They are more informal. They are a movement. If the KP will ask for help, we are ready to help,” he added.

“As far as I know, the personalities behind KP are not party members. We can help them. They can even be potential recruits to the party,” he told Rappler.

But KP has been inviting PDP-Laban members to the launch of the group in the provinces although it is not clear if any of them has committed to join. At least 3 local members Rappler talked to during the PDP-Laban Thanksgiving dinner last November have joined KP. They are supporters, not politicians.

Former assemblyman Abdulajid Estino, 54, claimed to be a member of PDP-Laban since the ’80s. Amildasa Anil was a member of the Mayor Rodrigo Roa Duterte (MRRD) for President Movement and joined PDP-Laban last year. Tating Buyos, 62, joined PDP-Laban only in 2015 to support the candidacy of Duterte.

They all recently joined Kilusang Pagbabago in the belief that it is an “extension” of PDP-Laban.

“KP is, from my observation, meant to assist the President in curbing criminality and corruption…. It is allied with PDP-Laban to help the administration. There is no attempt to outsmart each other,” said Estino.

The creation of a new party is inevitable, said a lawmaker who bolted the Liberal Party to become among PDP-Laban’s leaders in the House of Representatives. It is reminiscent of the factions that had characterized past presidencies.

“It is inevitable. Gloria had her Kampi. PDP-Laban is not really President Duterte’s party,” said the lawmaker.

Arroyo formed the now defunct Kabalikat ng Malayang Pilipino (Kampi) for her supposed 1998 presidential bid. But she was persuaded by the then ruling Lakas-Christian Muslim Democrats (Lakas-CMD) of former president Fidel Ramos to instead run for vice president under Jose de Venecia.

De Venecia lost, but Arroyo won and became the country’s most powerful official when Estrada, who was president at the time, was ousted by the 2001 “People Power 2” uprising. While Lakas remained the ruling party throughout Arroyo’s 9-year administration, Kampi members who joined Lakas reorganized themselves to become the loyal soldiers of Arroyo.

Other observers have pointed out that KP reminds them of the KIlusang Bagong Lipunan (KBL), or New Society Movement of former president Ferdinand Marcos formed in 1978. KBL became Marcos’ political vehicle for the duration of his presidency.

The Liberal Party, the ruling party under former president Benigno Aquino III, also suffered an internal split. The “true blues” comprising the original members of LP and the “yellows” who supported Aquino but were not very fond of LP president Mar Roxas.

Meanwhile, Duterte was confined to Davao City politics for decades and did not need to be actively involved with PDP-Laban, which was his party when he was a younger politician. He joined local parties to form coalitions in Davao City. In 2015, he “reentered” as PDP-Laban member amid calls for him to run for president.

KP is a response to the realization that presidents cannot always rely on their own political parties. During the administration of President Joseph Estrada, it was his own House Speaker Manuel Villar Jr who led the impeachment complaint against him, following growing public distrust and indignation over corruption allegations.

During the time of Aquino, LP passed his priority bills at the begining of his term but failed to deliver towards the end of his term when he was already perceived as a lameduck president.

The same source who is privy to Evasco’s plans said the Cabinet Secretary compared Duterte to Hugo Chavez, the socialist Venezuelan president who inspired nationalism among his people.

KP is also modeled after the Red Guards of the former Soviet Union, which recruited its membership from laborers and factory workers, among others.

KP has its set of advocacies, based on a white paper that was sent to Rappler by sources concerned that its success will move the country closer to the extreme left.

KP seeks to fight the following:

The white paper instructs KP to recruit most active leaders during the campaign and make sure that the barangay leaders are independent of politicians in the districts and the cities. It also instructs KP leaders to take advantage of instances when politicians offer help.

Party of the Philippine left?

Politicial observers are concerned that KP is being led by the leftists in government. But even the leftists are on a wait-and-see mode, Rappler learned, because some of them are wary of how KP will affect their organizations.

Asked about KP, former Bayan Muna Representative Satur Ocampo said he has not formed a judgment of the new group.

Whether or not KP will grow to be a formidable movement, and whether politicians and the Philippine left will be drawn to it has yet to be seen. But it is reminiscent of the campaign to make Duterte run for president. It was organized slowly but surely.

For better or for worse, KP could change the direction of the country’s political party system. – Rappler.com