Estelito Mendoza and his 2017 comeback in plunder cases 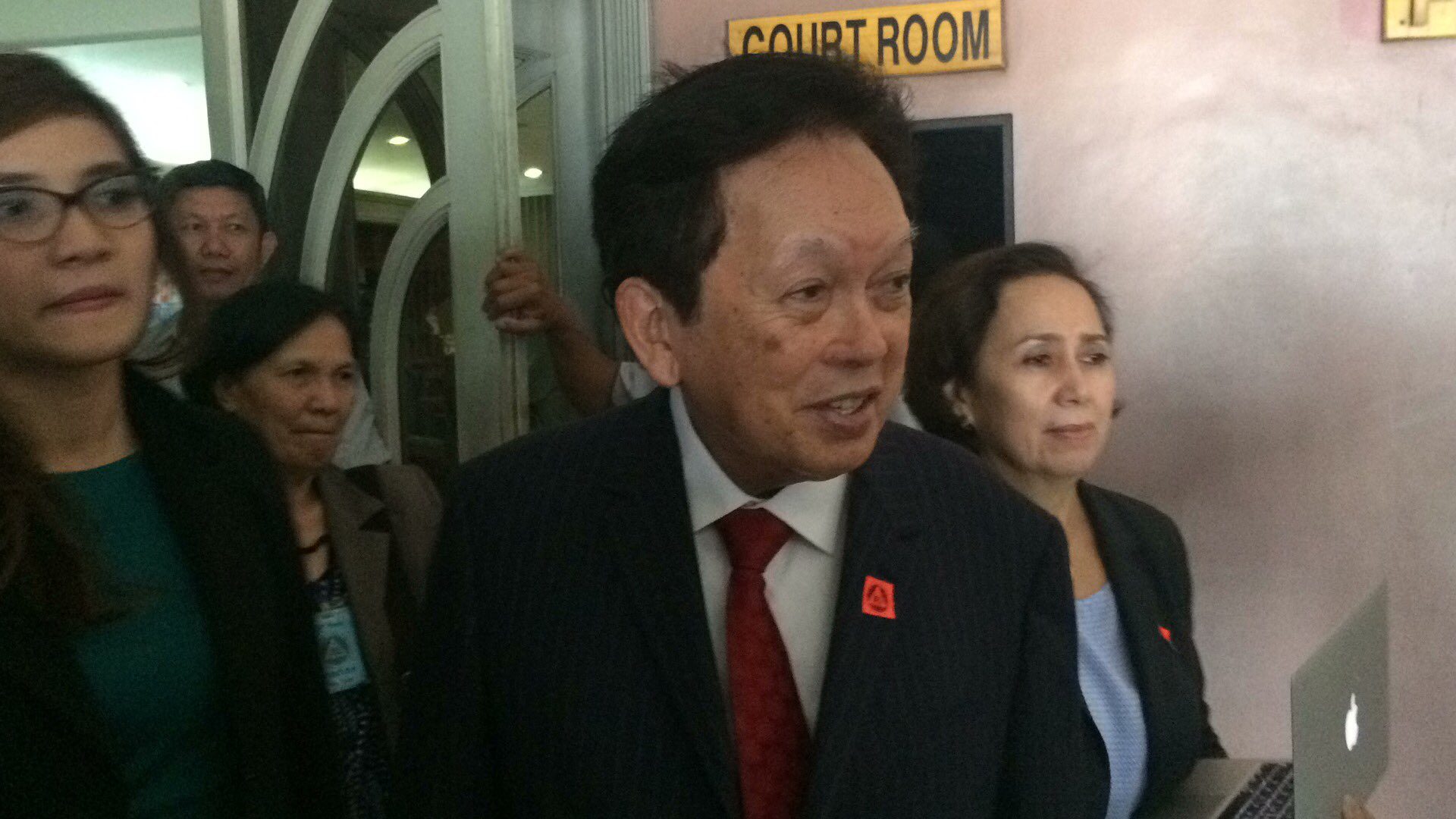 On Tuesday, April 11, the veteran litigator and octogenarian Mendoza attended a hearing for his newest client, Jaime Dichaves, the self-confessed owner of the dummy Jose Velarde account that got former President Joseph Estrada jailed, albeit only for a month.

Dichaves is facing his own plunder charge in connection to Estrada’s P4-billion plunder case over jueteng payola (pay-offs), misappropriation of tobacco excise tax funds, and other crimes.

Dichaves fled the country while Estrada faced his charges, and returned only in 2011. (READ: Cast in Erap plunder case: Where are they now?)

Using legal maneuvers, Dichaves managed to postpone facing his day in court. First, he was able to convince the Sandiganbayan to order the Ombudsman to conduct a new preliminary investigation.

When then newly-appointed Ombudsman Conchita Carpio Morales sustained the earlier plunder charge, Dichaves ran to the Supreme Court (SC), where he secured a temporary restraining order (TRO) against the proceedings.

But in February this year, the SC allowed the resumption of the proceedings and asked the Sandiganbayan to reraffle his plunder case.

So Dichaves hired Mendoza, who is fresh from victories in plunder cases.

A year before that in August 2015, he convinced the High Court to grant bail to former Senator Juan Ponce Enrile while Enrile’s former chief of staff, two other senators, and several similarly charged with plunder for the multi-billion-peso pork barrel scam remain behind bars. (READ: Behind the SC decision on Enrile’s bail)

With Mendoza now on his side, Dichaves filed a motion before the anti-graft court that has an effect of postponing anew the issuance of an arrest warrant against him.

Dichaves filed an urgent omnibus motion which basically asks the court to have the prosecution narrow down its evidence first before they can determine probable cause to have him arrested.

In the motion prepared by Mendoza, Dichaves noted that the prosecution has submitted 30,000 pieces of papers to the court.

“To facilitate the above, and the personal determination by the Court of probable cause, accused respectfully submits that the prosecution be required to identify in the voluminous papers it has submitted, the particular evidence upon which it relies for the court to issue warrant of arrest against the accused,” reads part of the motion, submitted to the court’s 7th division on April 3.

In an open court hearing on Tuesday, the anti-graft court gave the prosecution 30 days to comment, and Dichaves 15 days to reply to the comment.

Mendoza was able to give Dichaves what he wanted – a prolonged period before his warrant is issued.

Mendoza is known in the legal circle for his sharpness, for being able to spot the little things missed by other lawyers. It is this attention to detail that he brought to the table for detained Senator Ramon “Bong” Revilla Jr.

Revilla was the first pork barrel lawmaker to be scheduled for trial. Mendoza joined his team of lawyers in January this year just as the trial was about to start.

Mendoza filed a motion to quash, which was based on technicalities and wordings. He used the Enrile defense in trying to get the court to dismiss the case against his new client.

In February, the Sandiganbayan denied Revilla’s motion to quash. The ruling was made known to Revilla on the spot at his court hearing, but Mendoza was quick to manifest that he would file a motion for reconsideration (MR). (READ: EXPLAINER: Sandiganbayan denies Revilla’s bid to stop his plunder trial)

So the court reset the trial for the 3rd time.

Sandiganbayan Associate Justice Geraldine Faith Econg told both the prosecution and the defense teams to be prepared to work overtime in case conferences, and scheduled the final date for March 30. Associate Justice Efren dela Cruz even said that no further cancellations would be entertained.

But March 30 came without a hearing for Revilla.

Joefferson Toribio, lead prosecutor in the case, told Rappler in a text message on Tuesday that Mendoza had filed new pleadings. According to Toribio’s timeline, they had filed their reply to Mendoza’s MR earlier manifested, but Mendoza also filed a reply to their reply.

“In the interim [they] filed pleadings raising issues in the pre-trial. Tatamaan ng period to file nila ‘yung mga hearings kaya na-move ang hearing (The period for them to file will clash with the scheduled hearing dates so hearings were moved),” Toribio said.

The tentative date for the trial has once again been moved to April 20.

Mendoza continues to represent Enrile in his plunder case before the Sandiganbayan.

Mendoza also served as chief counsel for Estrada during his impeachment trial. He was also the counsel of former dictator Ferdinand Marcos and his wife Imelda when the government sued the couple for ill-gotten wealth. (READ: How the bright Enrile is fighting his plunder charges in court)

In defending Arroyo, Mendoza challenged the principles of plunder and accused the Sandiganbayan of creating a new version of the plunder law.

“If one does not amass, accumulate [and acquire], there is no plunder,” Mendoza said then.

Not long after, the SC would acquit Arroyo of plunder. (READ: The ties between Lucas Bersamin and Estelito Mendoza)

Where Mendoza plans to take his new plunder cases, it remains curious, but requires a close watch. – Rappler.com