Jun 11, 2017 2:00 PM PHT
Lian Buan
Facebook Twitter Copy URL
Copied
Aguirre says he would have wanted to settle for a quiet life, take care of his 6 grandchildren, tend to his bonsais, and resume scuba diving, but service beckoned 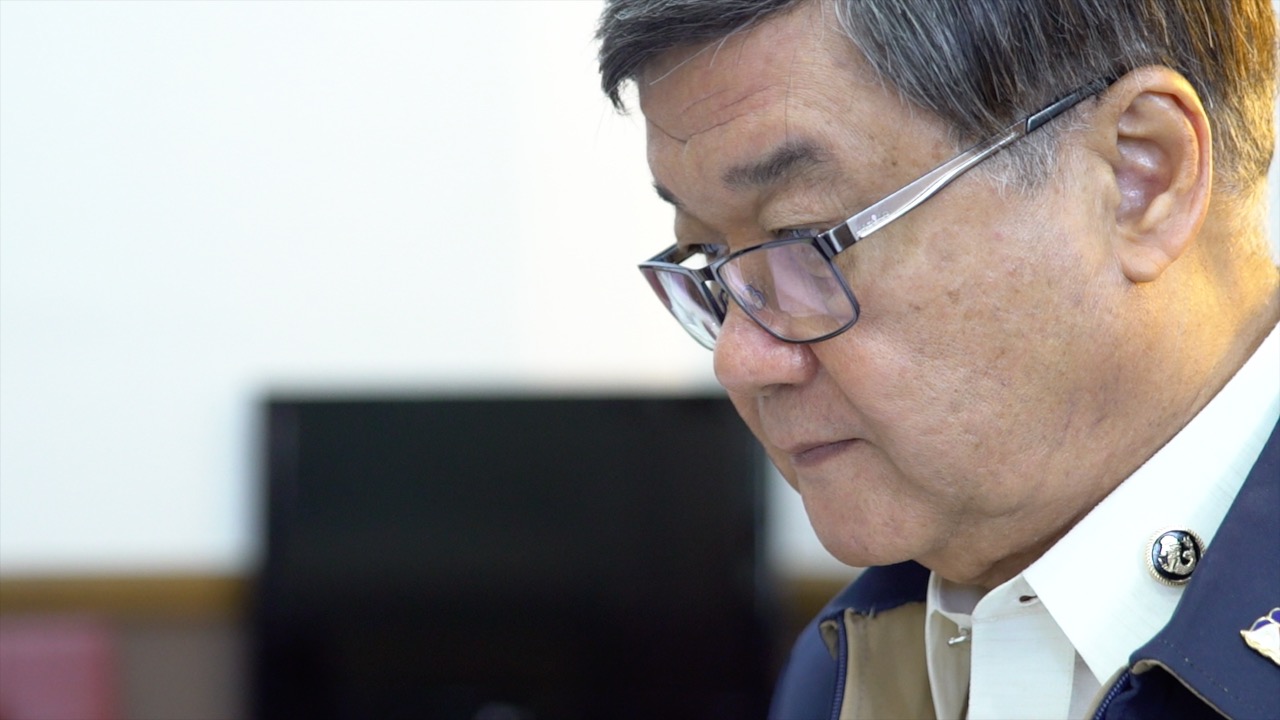 MANILA, Philippines – Justice Secretary Vitaliano Aguirre II is ready to face everybody, even the Senate, to defend his person and insist he is not the “fake news king”.

Aguirre said he will show up when Senator Grace Poe, chair of the Senate Committee on Public Information, summons him to explain his basis for linking opposition lawmakers to the crisis in Marawi. “Of course!” he said when asked if he would comply with the summon.

Aguirre is also standing by his Department Order authorizing a probe into opposition leaders for an alleged destabilization plot. That order was issued right after his controversial press conference and some hours before his claims were proven to be false – the photo he showed as his supposed proof of the destabilization, was found to be old and unrelated to Marawi. (READ: No public apology yet from Aguirre for fake news)

Senator Risa Hontiveros calls him the “fake news king of Padre Faura” and some are questioning his fitness to be justice secretary. But for Aguirre, this is all just a matter people being “entitled to their own opinion.” (READ: Aguirre denies releasing ‘Marawi meeting’ photo)

The opinion that matters is that of President Rodrigo Duterte, his boss.

Though he would want to tell Aguirre “Wala ka namang kadala-dala (You never learn),” Senator Panfilo Lacson of the Commission on Appointments said there is no way that Aguirre’s confirmation could be revoked now.

“Ang puwedeng mangyari kung mawala ang tiwala ng Pangulo sa kanya, tanggalin siya. Pangulo na lang puwede magtanggal,” Lacson said. (What could happen is if the President loses his trust in Aguirre, he can remove him. Only the President can remove him now.)

But the latest statement from Malacañang does not indicate that. “He has the full trust of the President. He has been doing an excellent job actually in the DOJ,” Presidential Spokesman Ernesto Abella said.

Duterte has always referred to Aguirre as his “bright boy” schoolmate, among the “brilliant” Bedans who are working for the ordinary Bedan, referring to himself.

Aguirre is a batch ahead of Duterte in the San Beda Law School and they both are members of the Lex Talionis Fraternitas.

Aguirre said Duterte and him weren’t “that close.”

(We were friends, but not very close friends like Judge Toribio Ilao who is now member of the JBC, They were the ones in the same group. Me, I was the valedictorian, I was head of the class. They liked to drink, although I also drank then – I’m from Quezon. But their activities included drinking and getting into fights with students from other schools, especially when it was related to the NCAA.)

Duterte and Aguirre have always been friends, so much so that in 2009 when Duterte was on the hot seat over the alleged Davao Death Squad (DDS) by his arch nemesis, then Commission on Human Rights Chairman Leila de Lima, Duterte hired his friend “Vit” as his lawyer.

Aguirre lists Duterte as one of his clients in his 5-page bio data, along with other clients who include Hubert Webb, Senator Lacson, and broadcaster Ramon Tulfo.

Curiously, he doesn’t list retired SP04 Bienvenido Laud or “Tatay Laud’ whom he defended up to the Supreme Court (SC) to try to block authorities from searching his quarry in Davao City, said to have been a burial ground of those supposedly killed by the DDS.

A certain Edgar Avasola had testified that the retired police whom he called “Tatay Laud” had instructed him and “6 killers to bring and bury equally the bodies in the three caves” in the Laud quarry at Barangay Ma-a.

In 2009, De Lima visited the quarry armed with a search warrant issued by a judge from the Manila Regional Trial Court (RTC).

It was Aguirre, as counsel to Laud, who argued that those search warrants have no validity because they came from Manila which has no territorial jurisdiction.

The search on the quarry had already yielded a few leg bones, skull parts, and license plates, but Aguirre argued before the High Court that the authorities who did the digging “ignored laws on exhumations, provided for under the Sanitation Code (Presidential Decree 856).”

They were trying to invalidate the warrant so as to also invalidate anything which came from the search.

In a decision issued in 2014, the SC First Division ruled that the search warrant was valid and even authorized the Philippine National Police (PNP) to search the quarries again.

Though it appears like it provides a new window of opportunity to investigate the DDS, the SC’s 2014 ruling remains as is – a ruling. Nothing is clear on its status since 2014, and it’s unclear what would happen to it, now that Duterte is president. 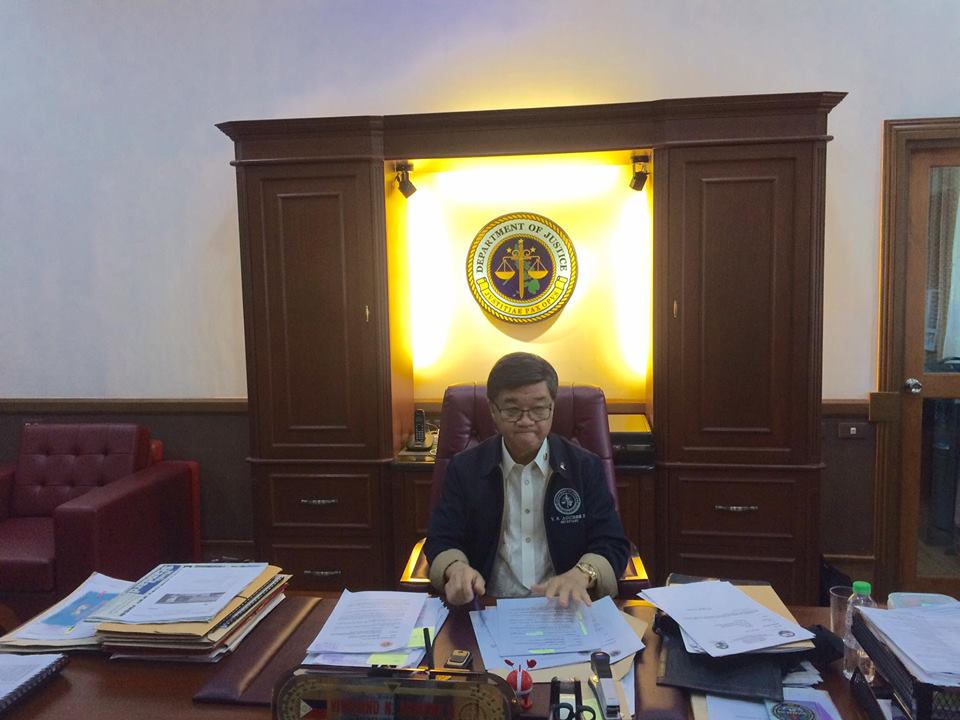 Aguirre, speaking from his desk at the Department of Justice (DOJ) headquarters, still sounds like a lawyer for Laud.

Former Senator Rene Saguisag, who taught at the San Beda Law School and once said he wanted to expel Duterte for shooting a classmate he had a spat with, remembers Aguirre not as a student but as a compañero.

“We were together in defending Hubert Webb. Brilliant. I understand he topped his class. Very good, very professional,” Saguisag said.

Then again, Saguisag said, “Tell me who your friends are and I’ll tell you who you are.”

The former senator added: “He’s entitled to his share of rookie misjudgments, like his boss. They should change course in a number of respects. I pray for my brother Bedans and appeal to the better angels of their nature, for the sake of the Motherland.”

‘I wanted to semi-retire’

Aguirre, who will turn 71 on October 16, said he had wanted to “semi-retire” after more than 4 decades of legal practice.

He had been partner in a number of law firms since the 1980s, and in 2006 put up the Aguirre & Aguirre law firm in San Juan with his middle son, lawyer Andrew Aguirre. His eldest Aristotle lives in New Jersey, USA and his youngest Achilles, in Seattle, where both are occupational therapists.

“Had it not been for the winning President, I would have been semi-retired,” Aguirre said.

Aguirre said that by the time Duterte was campaigning, he was already bracing himself for a life in politics as Duterte was already dropping hints he would be recruited to his administration.

The offer was formalized on May 18, 2016, when Aguirre went to Davao City to congratulate his friend, who had just been declared President-elect after leading the race with a margin of more than 6 million.

In a meeting with would-be Cabinet men, Perfecto Yasay – designated foreign secretary but later rejected by the Commission on Appointments – was relaying to Duterte his issues about scams in educational funds. Duterte told Yasay to get help from the DOJ, turned to Aguirre and said, “Hindi ba, Secretary Vit?” (Right, Secretary Vit?)

The rest was history.

Aguirre said he would have wanted to settle for a quiet life, take care of his 6 grandchildren, tend to his bonsais, and resume scuba diving (he’s a licensed diver), but service beckoned and this is where he is now.

Before this week, Aguirre said the “incident that changed his life” is the infamous moment with the late Senator Miriam Santiago where he was caught covering his ears as Santiago berated prosecutors during the impeachment trial in 2012 of the late former chief justice Renato Corona. Aguirre was even held in contempt of court.

It remains to be seen if this latest conundrum will change the course of things for Duterte’s “bright boy”, and whether more life-changing events will unravel in the future. – Rappler.com