The life of a Maute hostage in Marawi MARAWI CITY, Philippines – Omar Maute, one of the key leaders behind the attack in Marawi City, gave his own name to his hostage. “Omar na pangalan mo (Your name from now on is Omar),” Lordvin Acopio, a teacher at Dansalan College, recalled how they stripped him of his Christian name inside the battle area.

Acopio had gotten close to one of the key leaders of the local terror groups that espoused a radical ideology that the country’s top Muslim religious leaders had categorically rejected. They sought to carve their own territory in Mindanao and establish a caliphate.

(*This video is part of Rappler’s 35-minute documentary on Marawi. Watch it here: DOCUMENTARY | Marawi: 153 days of war)

Acopio could not recall the exact dates , but he said he first met Omar Maute about the time they finally decided to settle the hostages in Bato Mosque after days of jumping from one building to another to escape military bombardment. (READ: Terror in Mindanao: Mautes of Marawi)

The Maute fighters liked Acopio a lot, it seemed. They sent him to “Abu Anas,” the chief doctor in the battle area, to learn how to help attend to wounded Maute fighters. He laughed as he recalled how they gave him medical books and told him to study them to learn how to save their lives.

They called him “Doctor Omar” and they treated him like he was one of them even as they threatened to kill him if he escaped. “Omar, kung lumabas ka, papatayin kita (I’ll kill you if you escape),” Acopio recalled one of the fighters telling him.

One time, Omar Maute caught Acopio crying. He could not forget what the leader of Maute terror group told him.

Acopio was held hostage for 117 days. He was rescued on September 16, along with Catholic priest Father Teresito “Chito” Soganub, after a fierce firefight that forced the Maute fighters to abandon Bato Mosque. It gave the priest and Acopio the chance to run toward government troops who had closed in on their location.

Acopio talked with reporters on Tuesday, September 26, to share a story of survival and resilience. He laughed a lot and insisted he was okay, but acknowledged that he may not have totally processed his experiences in the battle area. 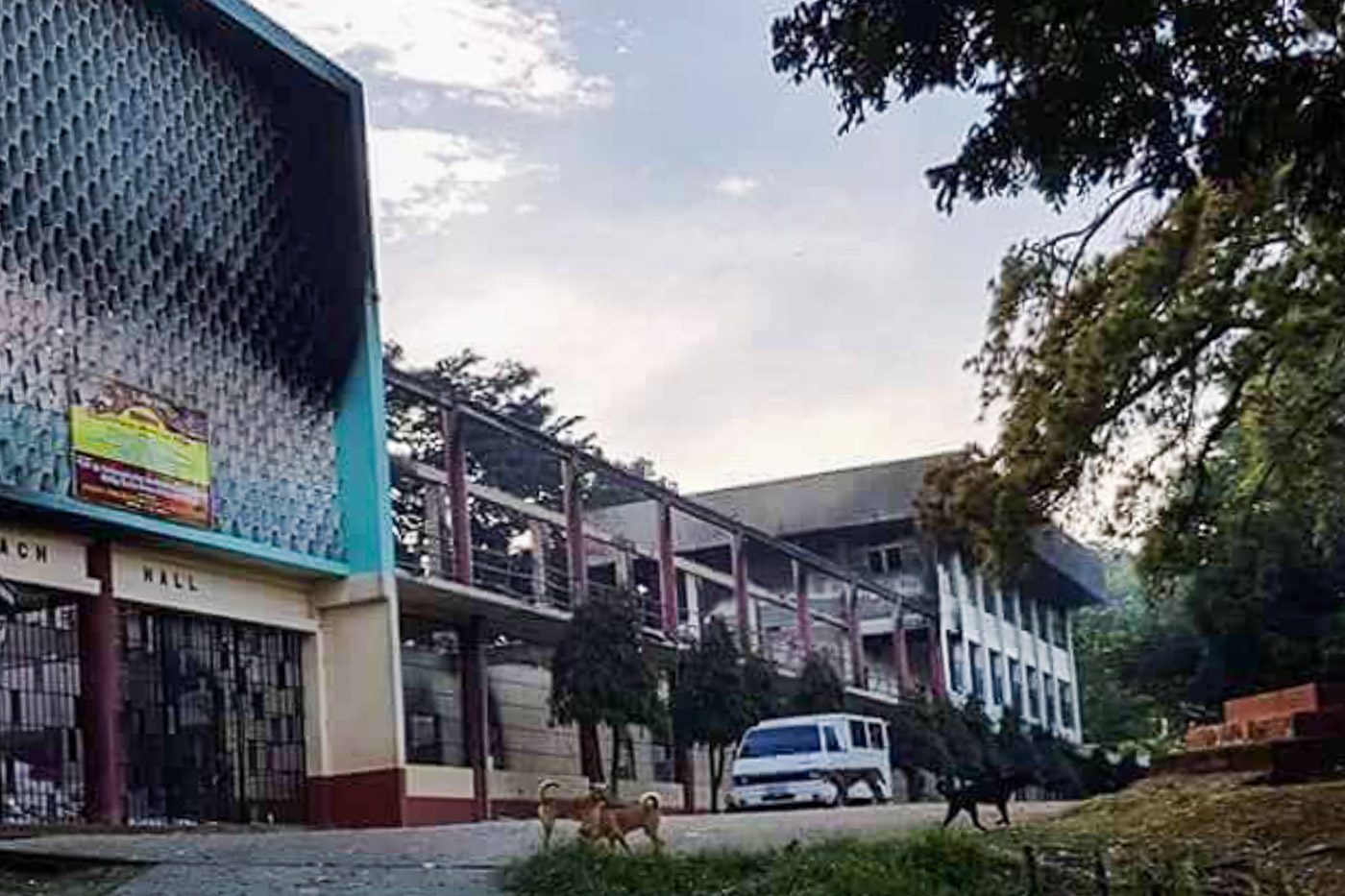 Acopio hailed from the Visayas. He would not have been in Marawi City when the war erupted on May 23 if he stuck to his plan to teach at Dansalan College for only a year. He was persuaded to extend his contract and was fixing his schedule when the initial firefights erupted.

At first, teachers at Dansalan College dismissed the reverberating sound of gunfire as another rido or clan war that would end quickly. After all, rido is common in Marawi. And then armed men came, banged on the doors of their building, and threatened to set it on fire if they did not come out.

Seven teachers at the Protestant-run school Dansalan College wailed as they were dragged into a vehicle.  Later, Father Soganub and his church staff would join them. Acopio said they were first brought to a restaurant in Banggolo but military bombardment forced them to keep moving.

They were scared as hell. Acopio said he thought they would be executed the night of May 23 when the Maute made the hostages line up in Banggolo. It was also in Banggolo where they met the prisoners released by the terror group from the city jail.

Days later, fear gripped Acopio when he and Soganub were told to put on orange shirts – the signature clothes of ISIS hostages about to be beheaded. In 2016, the Maute Group also beheaded sawmill workers. who were wearing orange shirts.

A video of Maute fighters executing civilians in Marawi eventually showed up online as propaganda video. One of Acopio’s future patients told him he and the priest were supposed to be among them. It wasn’t long when the hostages got used to the incessant thunder of the government bombardments. They were safe inside the mosque, knowing that the military was not going to target the religious facility.

All they did was sleep and eat in the early days of the war. Their captors eventually assigned them tasks to help in the day-to-day operations of their captors.

They also ransacked groceries and pharmacies for their food and medical supplies. Others were sent to serve as cooks for the fighters in the frontlines. They too were killed among the fighters, he said.

The small-framed Acopio was not fit for jobs which required a lot lifting. He did not have the strength to break open bolted doors or to carry sacks of rice. They told him to help make dirty bombs, but that too didn’t last long.

One day they sent him to “Abu Anas” – the chief doctor of the Maute fighters – at the Safrullah Medical Hospital which also served as the group’s headquarters. It was there that Acopio saw Isnilon Hapilon, the so-called emir of ISIS in Southeast Asia, although he didn’t know who Hapilon was at that time.

Acopio said there was something about Hapilon which scared him. “Masyadong seryoso (He was very serious),” he said. Unlike Omar Maute, Isnilon didn’t spend time with the hostages.

When government troops regained Safrullah Medical Hospital, the Maute retreated to the C&D Centerpoint or “Landbank” and converted it into a makeshift hospital. Acopio said the Maute fighters were able to open the big vault of the bank. Because it was fortified with concrete, the bank vault became the terror group’s new redoubt which withstood the pounding of air strikes.

“Pinagtaguan yun kapag binobomba sila ng fighter jet eh. Alam kasi nilang matibay yung vault… Malaking vault (They hid inside the vault when the fighter jets were bombarding us. They know it’s fortified. It’s a big vault),” said Acopio. Acopio said he did not know where the Maute took the money in the vault.

When “Abu Anas” was killed during an air srike at the building, Acopio became the Maute Group’s chief doctor. “Hindi nila alam hinuhulaan ko lang ginagawa ko (They didn’t know I was just guessing what I was doing),” Acopio said, bursting into laughter.

But Acopio learned how to use diapers on bleeding wounds and when to give what type of pain reliever – Tramadol or Mefenamic. They were well stocked with these medical supplies.

He treated Omar Maute twice. The last time was in an encounter at Landbank, just a few days before Acopio regained his freedom.

It was a demanding job. He would go sleepless for several nights attending to patients he needed to monitor or needed to help eat or pee.

“Kakaidlip mo pero sasabihin, ‘Iihi ako’. Matutulog ka na sana pero sabihin, ‘Kakain ako’. Halos 3 days ‘yun parang lasing ka or naka–drugs ka na di mo alam. Naiiyak ka na lang (You just shut your eye but you’re told, ‘I need to pee’. You’re about to sleep but you’re told, ‘I need to eat.’ I remember there was a time I was sleepless for 3 days straight and it felt like I was drunk or under the influence of illegal drugs. You can only cry),” he said.

Acopio said he performed the job knowing his life depended on it. “Kasi kapag hindi mo ginawa ang tama… For example, hindi tama pagbigay mo ng gamot. Kung magreklamo patient mo, malay mo baka patayin ka nila (If you don’t do the right thing, for example, I don’t give them the right medicine. If my patient complained, who knows if he would just kill me),” he said.

Hostages had no choice but to accept their fate as hostages. They couldn’t run to hide when bombs were falling because the Maute fighters might think they were escaping. Acopio himself had come to accept that he could die inside the battle area. Acopio’s is a story of survival and resilience. He said the hostages had learned to stay strong together. They also made friends with their own captors.

Acopio admitted praying with his Muslim captors, confirming military reports that hostages had converted to Islam. Acopio said it wasn’t a big deal to him.

He laughed his way to survive his ordeal. He often bantered with them.

One of his patients was singing a song that goes: “Pupunta ako ng paraiso. Hindi gagamutin ang sugat ko (I will go to paradise. I will not heal my wounds).”

He also made friends with the foreign fighters whom he sometimes served as interpreter, and child warriors who liked him and treated him like a big brother.

Acopio said the children made the fiercest fighters in Marawi and they liked to watch ISIS propaganda videos, including the beheading of hostages. He said they have been clearly brainwashed to fight for the radical ideology they’re too young to even understand.

“It’s disgusting,” he told them once but the children defended the violence.

Acopio stayed close to Father Chito. They had long planned to escape when the troops got near their location.

They found the opportunity the night of September 16 when troops advanced to take Bato Mosque. The fierce firefight forced the Maute fighters to abandon the mosque and allowed Acopio and Soganub to run toward the troops. (The military requested the media not to divulge the details of the rescue while operations to rescue the others are ongoing.)

“Ang pari! Ang pari! (The priest! The priest!)” troops shouted when Soganub emerged. They tied the hands of Acopio, who was not known to the troops.

It’s been about two weeks since Acopio regained his freedom. He is safe, has left Marawi, and has gone back home. But he continues to worry about the hostages he left behind.

The military believes there are 45 more hostages in the battle area. – Rappler.com