Drugs 101: What are schools telling kids about illegal substance abuse?

Nov 25, 2017 10:39 PM PHT
Mara Cepeda
Facebook Twitter Copy URL
Copied
Questions about the drug war and a lack of textbooks hound schools as Filipino students learn about the dangers of drugs inside the classroom

MANILA, Philippines – The sprawling quadrangle of the Cayetano Arellano High School lies a few blocks away from Tondo, where the first death in President Rodrigo Duterte’s drug war happened.

Many of the high school students here have not only seen the war on drugs from their television screens; they live in the very same communities where men and women have been gunned down under suspicions of drug use.

(Some are scared, especially those living in Tondo. Because when we discussed the drug scenario, they shared that sometimes they would hear gunshots at night.)

Luckily, none of the 4,300 Arellano High School students have relatives victimized by the bloody drug war.

Such an atmosphere, however, only highlights the crucial role schools play in being the frontline defense of students against illegal substance abuse.

The Department of Education (DepEd) designed the Kindergarten to 12 (K-12) curriculum in such a way that students would learn about “Substance Use and Abuse” in their health classes in Grades 5, 8, and 9.

But old and new problems persist: There’s the perennial issue of inadequate textbooks for students and schools without proper audio-visual equipment for lessons. Under the Duterte administration, teachers are now confronted by students with questions about the drug war.

What do schools teach to these inquisitive students, and are the lessons enough to prevent the children from using the drugs themselves?

Rappler had the chance to sit in during the health class of Arellano High School’s Grade 9 Abad Santos section.

It was the middle of the day, the classroom humid. Olmos started setting up her things while waiting for her students to enter the classroom. She placed a 32-inch television screen in front. It was hers, bought with help from her sister’s credit card. The longtime teacher said the school couldn’t afford to provide television screens or projectors in each classroom, so she improvised.

She also carried a tablet that contains her lesson plan for the day. Olmos got the gadget for free from Manila Mayor Joseph Estrada, who gave them to teachers in his city. 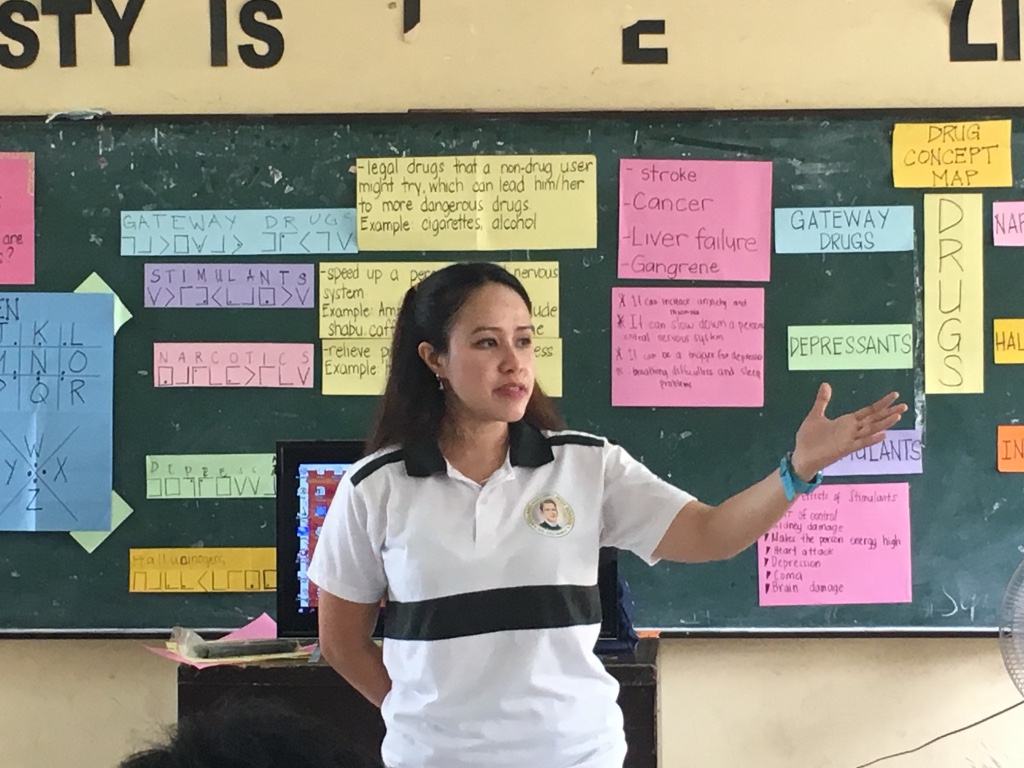 When the students finally settled in the classroom, Olmos told them their topic was about the different types of drugs: gateway drugs like cigarettes and alcohol, stimulants, narcotics, inhalants, depressants, and hallucinogens.

She made the students watch a 10-minute video explaining why some Filipinos end up selling and using drugs. Poverty was the main cause. Then came a post-video debriefing, where Olmos asked the children guide questions about the short video.

The teacher also raised the question if her students knew about the government’s drug campaign. One student said yes, adding that some Filipino teenagers were killed because they were suspected to be drug addicts. (READ: LIST: Minors, college students killed in Duterte’s drug war)

Do these teenagers know about the effects of drugs? No, said another student. That’s why he and his classmates should stay away from illegal substances.

The class was then separated into 6 groups, each assigned to decode a word that Olmos wrote in strips of cartolina. The words corresponded to one of the 6 types of drugs.

The teacher then asked them to bring out their art materials and make a scrapbook about the kind of drug assigned to them. Out came the pens, glue, sequins, and wrapping papers, with the students scrambling to finish their masterpieces within the teachers’ timeframe.

The result was 6 colorful scrapbooks that described the 6 types of drugs in detail – from their proper use in the medical community, who uses them, and the drugs’ effects on the body when abused.

At the end of the lesson, Olmos gave her students homework: interview someone from their community about the different myths and misconceptions about drug use and abuse. Give the signs and symptoms of drug addiction.

Under the K-12 curriculum, the topic “Substance Use and Abuse” is covered by Grades 5, 8, and 9 students during the 3rd quarter of the school year (SY).

Olmos said she begins the lesson with a quick discussion on the current drug scenario in the Philippines.

“According to our discussions, they are aware that those involved in drugs are getting younger and younger. We then discuss the factors. What are drugs? Do they have positive effects? Do they have negative effects? And then after that are the prevention skills. How are they going to say no if somebody is asking them to take it?” said Olmos.

Carol Manalaysay, Arellano High School’s head teacher for its music, art, physical education, and health classes (MAPEH), said they also do not hesitate in teaching the students about the different street names of the drugs.

“We don’t want to teach the value of ignorance, because it’s there. You have to be informed. If you don’t give the information, it’s there and they don’t know about it, we’re teaching ignorance. We don’t want to produce youth who [are] unaware,” said Manalaysay in Filipino.

“Drugs are everywhere. If we’re not going to [correct] the information about it, there will be more curiosity. We’re here, as teachers, we’re here to inform,” she added. 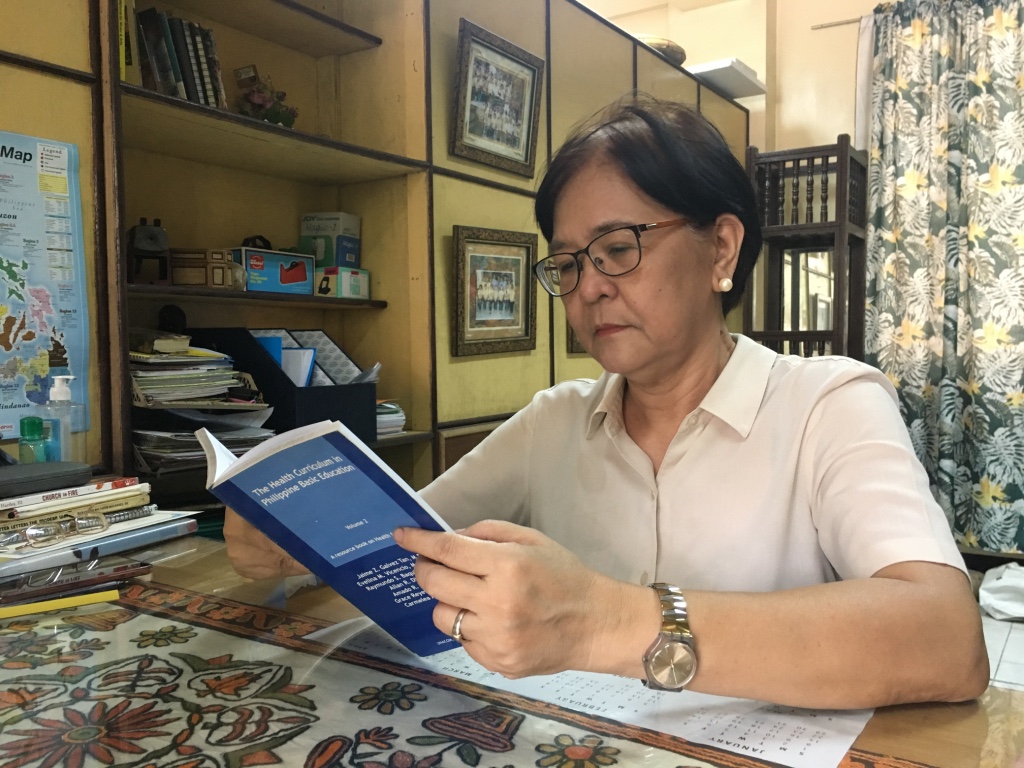 Arellano High School also holds parent-teacher conferences and seminars for parents, where preventing the abuse of illegal drugs is discussed. (READ: In a time of ‘pervasive’ violence, build ‘caring communities’ for children)

Manalaysay said parents’ involvement is important, because students who end up getting addicted to drugs or alcohol often come from broken homes.

(Oftentimes when you ask a child why they went drinking in Luneta, they would say parents aren’t around, parents working, parents are separated. The scenario is that drug-related problems happen because, I think, the family is dysfunctional.)

Manalaysay said this is why she would always remind teachers to check in on the home life of their students, too.

No guidelines on drug war discussions

In 2016, Education Secretary Leonor Briones already announced her plan to make drug education classes go beyond textbooks in teaching the dangers of drug abuse in the country.

Briones believes students would better understand real life stories on drug addiction and rehabilitation if these were shown to them through school films, plays, and dramas.

Still, there’s a glaring hole in the drug education curriculum: DepEd has no directive to schools to dedicate substantive discussions to explain and give perspective to what is happening in the government’s anti-drug campaign.

At most, teachers like Olmos breeze through the said topic in class, then shift the focus on the more “academic” side instead: description, types, positive and negative effects of illegal drugs.

“Right now, [we have no directives]. Thank you for giving us that feedback. We will consider that seriously for places where the drug menace is most intense,” said Briones.

The Cabinet official added that this is yet another reason for supporting DepEd’s plan to conduct mandatory drug testing of high school students this SY.

“And also this is also why instituting our drug testing program [is important], precisely to determine the prevalence and the dangers. That is a very real concern. If I were living in some of these places, my parents or myself would really be terribly scared,” said Briones. 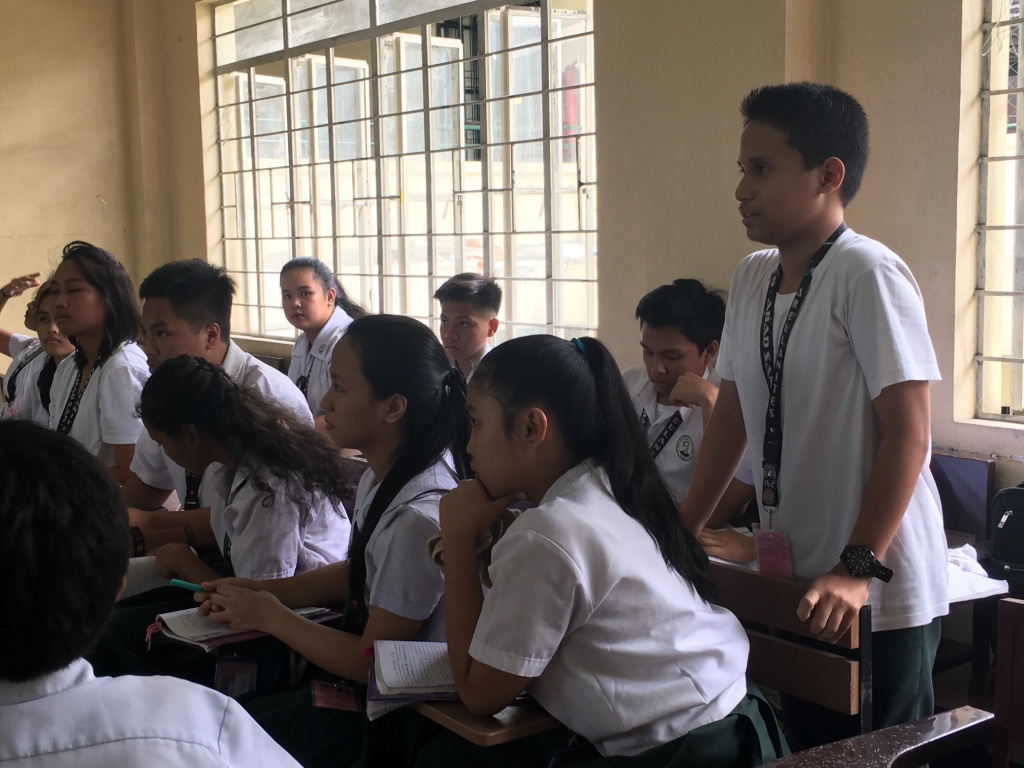 Grade 9 student Angelo Guballo wishes the drug war will be a permanent topic in class. He said this is because most of his classmates are shy to bring up the matter to their teachers.

(I want us to discuss the war on drugs so that my schoolmates would know what’s really happening in our communities. Because not all kids have the capacity to properly understand what’s going on around them.)

Olmos said that in the cases when a student approaches her to ask about the drug war, she aims to give an objective answer, avoiding imposing a judgment on her students.

(So I tell them that according to law, everybody should have due process. So you can’t just impose punishment on someone without the proper process or investigation. If they know someone killed, they should check if the person was on the drug list, if he or she was given a warning or was spoken to, or it’s possible it wasn’t the police responsible for the death.)

Tablets to address lack of textbooks?

Another problem for drug education in the Philippines is the lack of textbooks.

“We don’t deny that, that there is a shortage. And it’s one of the major challenges right now,” conceded Briones. 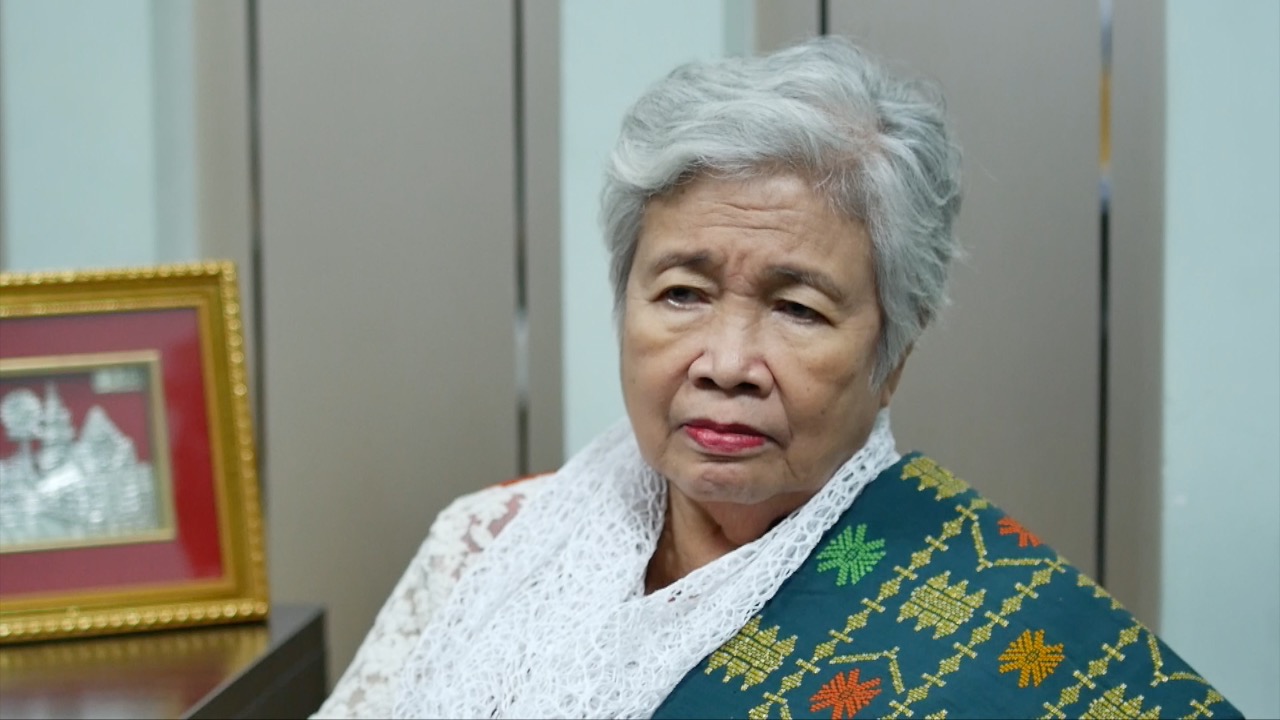 The DepEd chief said they are now considering using tablets in schools instead of textbooks, a proposal that is backed by the President himself.

She agreed, however, that funding these tablets will be a “main roadblock”, considering that one tablet costs more than a textbook.

“So we are hoping that at the rate tablets are being produced and at the rate other countries are also buying other tablets, baka bababa ang presyo (the price will go down),” said Briones.

Manalaysay is also hoping DepEd would not only restrict drug education to Grades 5, 8, and 9.

While she understands that 14- or 15-year-olds are regarded as the ones more vulnerable to drug abuse, Manalaysay thinks being able to teach children from other grade levels about the subject will be a better deterrent against drug abuse. 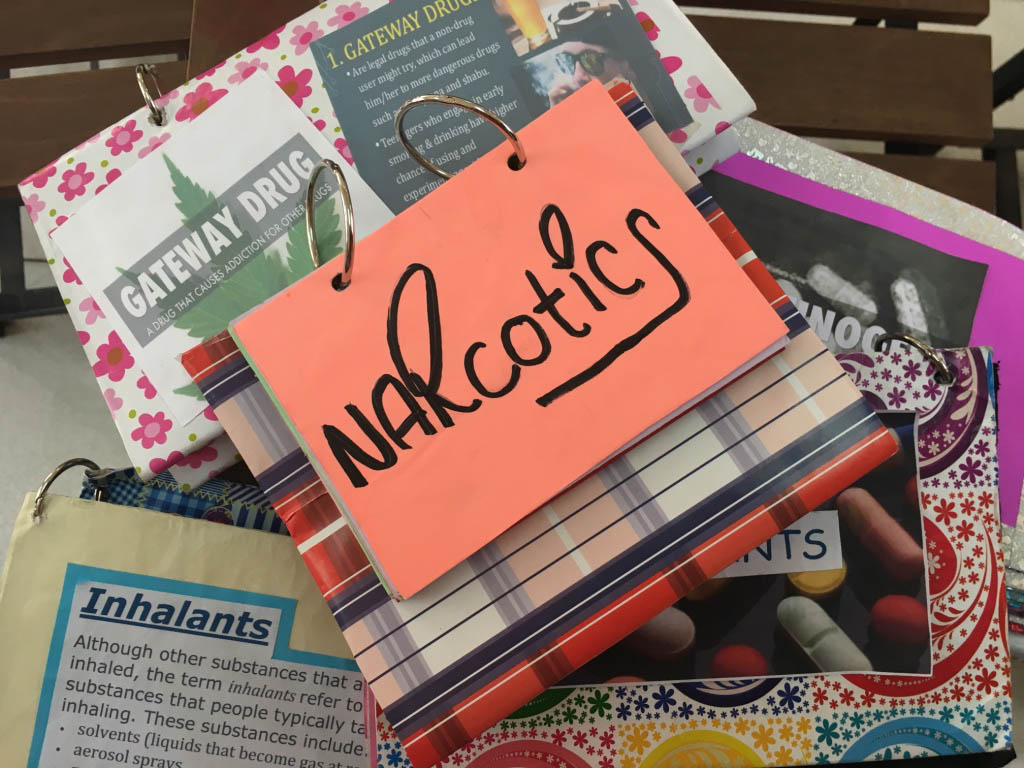 For now, schools make do with what they have. The main goal of teachers at the end of the quarter is to help students develop values that would lead them to voluntarily say no to drugs.

(So that’s the process of K-12 now – the teacher will not tell you what you ought to do, but the teacher will facilitate your learning so that you will be able to process the information and determine the right decision. The child should be able to say that we studied this, these are what will happen, this is what should be done, and then therefore, I will decide not to use or abuse drugs.) – Rappler.com