The cost of dying in Duterte’s war on drugs

Dec 10, 2017 12:02 AM PHT
Facebook Twitter Copy URL
Copied
President Rodrigo Duterte's war on drugs has left thousands of casualties in its wake. But families of victims can barely afford to bury their dead because of high funeral costs.

MANILA, Philippines – President Rodrigo Duterte’s war on drugs has left thousands of dead people in its wake. Most of them belong to families who could barely afford 3 meals a day, much less a proper burial.

It was close to midnight when Flor tracked down her nephew, Alex, and Michelle her son, Mark, but they couldn’t take them. Light Funeral Service demanded P35,000 ($690)* to claim each body.

Earlier in the day, the women set out to search for the boys they held just the day before. Later on, they learned that the celebration their children attended the past night had turned into a bloodbath.

John, Mark, and Alex along with two others, were celebrating John’s 38th birthday when a knock on the door led to gunshots that left all 5 men dead in Barangay Payatas, Quezon City, on August 15, 2016.

May*, John’s wife, said she was lucky she reached her husband’s body at the morgue. That way, she had the chance to take John to a funeral parlor she could afford.

Flor and Michelle were not as lucky. The bodies of Alex and Mark were nowhere to be found as the sun rose over Quezon City the morning after the birthday massacre.

Following whatever lead they could, they searched in hospitals, morgues, funeral homes, and the police station. But at each destination they met a dead end, and were told to look elsewhere.

She added, “Sabi namin, sabihin ‘nyo naman kung saan dinala, kung nasaan (We begged them to tell us where they brought them, where they were).”

Yet as soon as they found the bodies of the two, they were told that the corpses had been subjected to an autopsy.

(They said they already processed the bodies. They told us they autopsied the bodies because no relative came and we took too long. You can’t just do that to a body. It’s torture.)

Since July 2016, at least 3,993 individuals have been killed in anti-illegal drug operations of the Philippine National Police (PNP).

Critics have argued that Duterte’s war on drugs has been largely a war on the poor. Poor families not only suffer the loss of loved ones, but are also burdened with the cost of burying them. (READ: This is where they do not die) 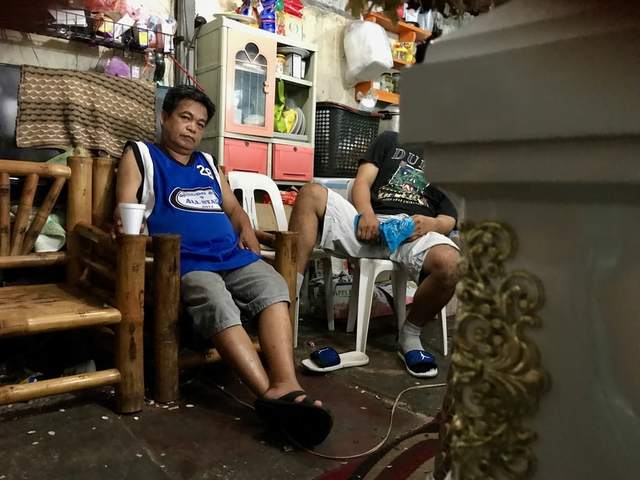 Boy Ramos, the father of Ara, said that they did not know where to get the money to pay for the funeral expenses of his daughter. As a taxi driver, he was barely earning enough.

Ara, 17, died in a shootout on May 1 inside a friend’s residence along San Simon Street, Barangay Holy Spirit in Quezon City.

The investigators of Ara’s case referred them to Light Funeral Service, where they were supposed to be charged less, or if they were lucky, not at all.

When Ara’s remains were brought to their home on May 3, Florence Ramos, Ara’s sister, went to the office of the funeral service located along Kamias Road to ask for their balance. She was surprised to see P60,000 at the bottom of the contract.

Like the Ramos family, Flor and Michelle held the funeral for Alex and Mark, respectively, using Light Funeral Service. The two families could not afford to pay the fee of P35,000 ($690) to retrieve the bodies of their loved ones.

What makes it so expensive?

At the beginning of his presidency, Duterte said that the funeral parlor business  would boom from all the casualties in his drug war.

“Instead of going to drugs, you might want to put up a business, sabihin ko sa inyo, itong mga panahon, itong mga araw na dadating, kung may punerarya ho kayo, kikita kayo nang husto (These coming days, if you have a funeral parlor, you will earn a lot),” Duterte told Tondo residents after he took his oath of office on June 30, 2016.

(These small-time funeral parlors, you will earn enough. If your business falters, I’ll tell the police, hurry up because these people need to earn.)

But many of the victims of the drug war have faced the problem of not having enough money to properly bury their dead. Despite this, some funeral parlors continue to charge high rates.

Documents obtained by Rappler for 4 of the victims’ families showed a breakdown of the costs charged by Light Funeral Service. “Restoration of human remains” came out to be the most expensive service on the list at P17,500 ($345).

This was followed by other services including a registration fee, burial permit, 7-day wake duration, casket and hearse, as well as a tarpaulin, some flowers and balloons, which totaled about P32,500 ($641). 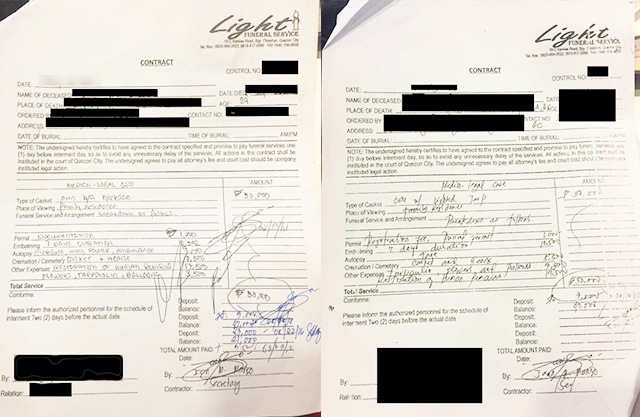 According to Flor, one item not included on the list which she paid for was an extra formalin shot, priced at P3,000 ($59), to preserve the remains Alex for the rest of the wake.

Accounts of the families show discrepancies between the prices that they were initially told, and those written on their contracts. 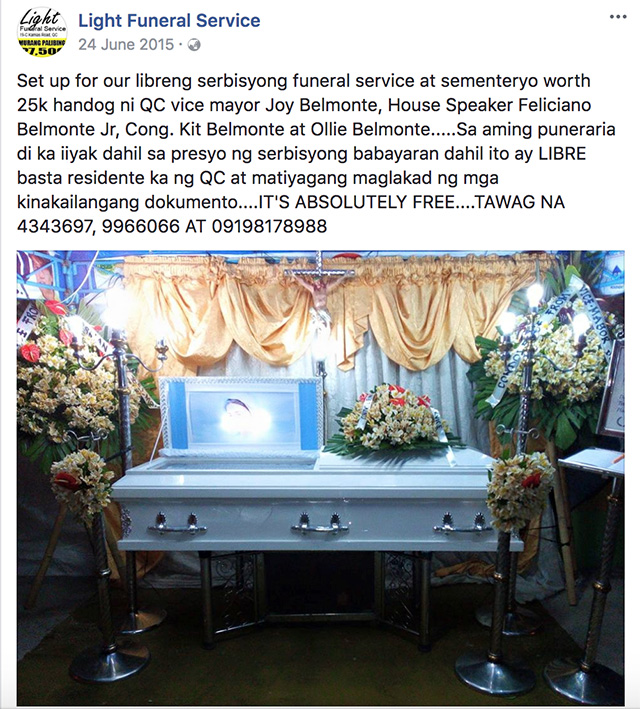 Upon arrival at the funeral parlor where they had found the bodies of Alex and Mark, Flor and Michelle were told to pay P35,000 ($690) as the bodies had been autopsied despite the absence of the family’s consent. However, documents list autopsy costs as free or at P9,000 ($177) detailing the use of morgue, man power, and an ambulance.

On the funeral service’s official Facebook page, advertisements for their “libreng serbisyong (free) funeral service” show yet another cost: P25,000 ($493).

Rappler reached out to the company several times but no formal response was received as of posting.

According to two other funeral parlor operators who have received hundreds of bodies from the drug war, the amount Light Funeral Service asked the families of the victims to pay were “higher than usual.”

Orly Fernandez, operations manager of Eusebio Funeral Homes in Malabon, told Rappler that their service usually just costs P28,000 ($552) which already includes everything except the price of a cemetery plot. The biggest chunk, he said, goes to embalming and restoration.

(That’s the lowest. All those we serviced in the past who were drug-related, the families were all able to pay because we only ask for a low price.)

Since it knew that most of the families that avail of the services are indigent, Eusebio Funeral sees to it that the families are made aware of the burial assistance available. They usually end up only paying less than P25,000 ($493) because of this.

(I will even teach the family how to seek assistance. I tell them to go to this certain place, bring the contract and death certificate and they’ll usually give P5,000 ($98) so you’ll pay less.)

Jose*, a manager of a Pasay-based funeral home, meanwhile, said that they charge P25,000 ($493) to P30,000 ($591) for drug-related deaths. Like Eusebio Funeral, they also offer discounts and refer families to organizations who can assist.

Sometimes, he said, it is the families themselves who adjust to lower the cost.

(If they do not want extra costs and to be more practical, they don’t buy a coffin, they cremate immediately. No more wake because that’s what increases the cost.)

Still, there are a lot of families who are not able to pay the total amount. According to Jose, they end up giving only promissory notes.

(Sometimes you just recoup your expenses just to get rid of it because their problem is also your problem. You just have to pray that they will come back and pay the remaining balance.)

Even if the families had complaints about the amounts charged, they knew they had no choice but to pay.

To make up the bulk of the burial costs, families tried to avail of burial assistance from various government offices.

When this is not enough, they stretch the wakes of their loved ones just to get more abuloy (donations) from good-hearted visitors.

Flor, whose nephew’s wake lasted for two weeks, obtained assistance amounting to P47,000 ($927) from the Department of Social Welfare and Development (DSWD) after refusing to take the initial P10,000 ($197) offered to her. 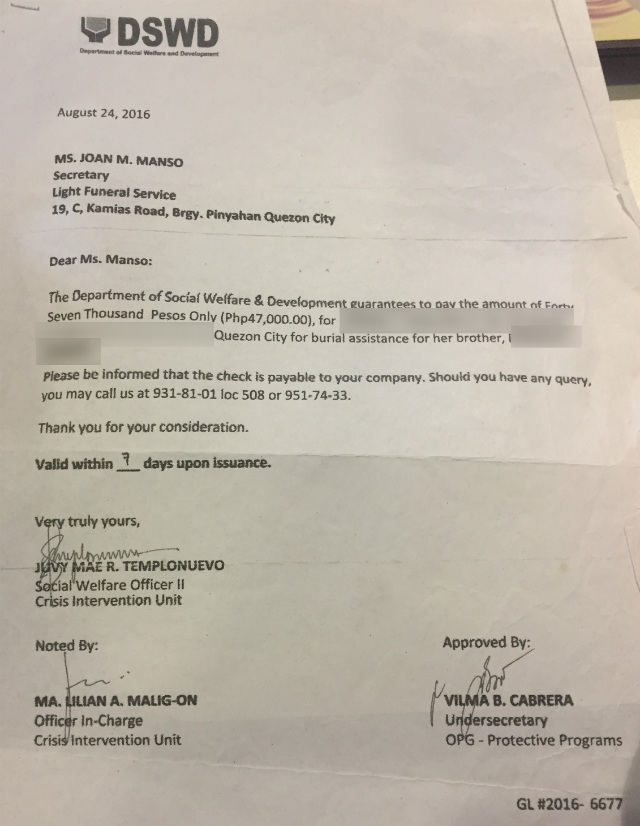 Boy, meanwhile, received a DSWD guarantor letter that covered the amount of P30,000 ($592) after going through interviews and doing the necessary paperwork. He received an additional P30,000 from Baclaran Church.

It wasn’t the same for Michelle who only got P4,000 ($79) from DSWD. The rest was covered using the money donated by those who visited the wake of her nephew.

(We told them that we really cannot pay that much. Light [Funeral Service] told us to go to City Hall.)

Michelle and Flor were eventually able to get a sum of P1,500 ($30) each from the offices of Quezon City Mayor Herbert Bautista, Vice Mayor Joy Belmonte, and Representative Winnie Castelo.

For Elaine, the sister of a victim named Jerico in Payatas, she got P10,000 ($197) from Belmonte – the maximum amount given to indigent residents for burial assistance, the Vice Mayor later told Rappler.

The rest was paid off by donations – over $2,000 – gathered by a Vietnamese-Australian human rights lawyer who read about Jerico and Angel. (READ: IMPUNITY: Let them sleep)

(I told my father, we really cannot pay that. What are we going to do, hold a long wake for Jerico? That’s why I am so grateful for all those who helped us.)

The families were eventually able to pay either full or a part of the funeral costs. But going through government bureaucracy on top of being distraught over the untimely death of a loved one left them feeling “tortured.”

“Patay na nga, pinapatay pa lalo sa gastos (They were already dead. They were killing us with more costs),” Elaine said. – with reports from Rambo Talabong/Rappler.com

READ: Part 2: Police and funeral parlors: The business of picking up the dead

*Names have been changed to protect their identities