Prone to abuse: State surveillance as a tool to silence critics

Mar 18, 2018 12:18 PM PHT
Facebook Twitter Copy URL
Copied
Human rights activists say the conduct of both physical and communication surveillance is prone to abuse and is a violation of a citizen's right to privacy

MANILA, Philippines – State surveillance is not new to the Philippines. Administrations across history had engaged in this monitoring to protect national security – to prevent terrorism, rebellions, and attacks.

The conduct of both physical and communication surveillance, however, can lead to abuse and violation of a citizen’s rights to privacy when left unchecked. It also plays a role in silencing dissent and valid criticism, according to human rights activists.

Two administrations post-Marcos stand out when it comes to state surveillance – those of Gloria Macapagal Arroyo and President Rodrigo Duterte.

While the Arroyo administration allegedly had a so-called “Order of Battle” (OB), Amnesty International Philippines Chairperson Ritz Lee Santos said that the Duterte version is reportedly called “persons of interest.”

The list allegedly includes activists and individuals the administration deemed to be critical.

There are several ways by which surveillance can be carried out, such as through wiretapping, bugging, or physical monitoring. (READ: What you need to know about state surveillance)

“We have monitored several instances of physical surveillance,” said Kaparatan secretary general Cristina Palabay. “May nagmamanman, may naghihintay sa amin sa labas (there are people on tailing us, waiting outside) so we had to cancel some meetings, of course, because you can never tell what’s next.”

One of these incidents includes the discovery of a tracking device in Karapatan’s service van. It was discovered after they got the vehicle back from custody at the Manila Police District during the Association of Southeast Asian Nations (ASEAN) Summit in November 2017.

There were also many hacking attempts of the social media accounts of several human rights activists, according to Santos.

Karapatan, meanwhile, now refers to their office as a “fixed point” – or a place vulnerable to electronic and physical surveillance. The group fears that their cellphones and landlines have been compromised, exposing their conversations with clients and other groups.

Because of these threats, Palabay said that as much as possible, they do everything “old school.” 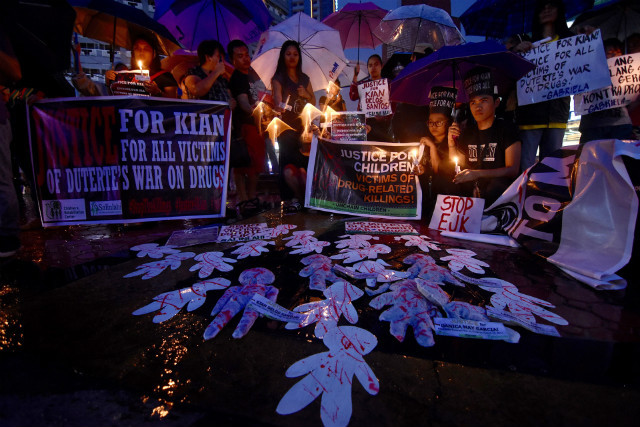 Under the 1987 Philippine Constitution, the privacy of communication and correspondence shall be inviolable “except upon lawful order of the court, or when public safety or order requires otherwise, as prescribed by law.”

There are also laws such as the Anti-Wiretapping law and the Cybercrime Prevention Act that prevent instances of communication interference without a court order.

However, human rights defenders point out the Human Security Act which says that interception and recording of “any communication, message, conversation, discussion, or spoken or written words,” with the use of any type of surveillance equipment or any means suitable is allowed in cases of terrorism.

This is what scares members of progressive groups – especially with the latest move of the Philippine government seeking to tag at least 600 individuals as terrorists. The list includes alleged leaders and members of the Communist Party of the Philippines (CPP) and the New People’s Army (NPA).

For many critics, this reflects the Duterte administration’s overall stance against dissent. Human rights organizations and those who have called out government policies – especially the violent war on drugs – have been continually threatened and demonized by the President himself. (READ: ‘Demonizing’ human rights under Duterte)

Human rights workers main job is to ensure that people – and the government – realize the importance of following due process and protecting rights enshrined in the 1987 Philippine Constitution and various international treaties.

Because they act as watchdogs of the state, placing them under state surveillance is not just a violation of their rights but also an intereference of their work, according to Santos.

“If there’s really surveillance and those who are placed under it have no records of criminal offense, are not enemies of the state, and are just exercising their right to say something for or against the government, then there are insecurities,” he said.

Palabay, meanwhile, said that vilifying human rights defenders often goes hand in hand with surveillance. In many cases, several of these incidents lead to far worse attacks just to silence dissent and beyond an act of intimidation by state agents.

“Palaging may physical tapos kasabay niyan ‘yung public vilification sa amin (There’s always physical surveillance partnered with public vilification),” she said. “Kapag hindi na nila mapatahimik (when they know people cannot be silenced), they will try to file cases, and if that doesn’t work, they go on to worst forms of attacks like attempted murder. Sometimes they succeed.”

This was echoed by Jam Jacob, legal and policy adviser for technology and rights advocacy group Foundation for Media Alternatives.

“Surveillance is a violation of privacy, a prelude to more human rights violations like desaparacidos, those abducted,” he explained. “Sa umpisa, tinitiktikan sila, minamanmanan, paano iyong routine nila (At first, they’ll being tailed, monitored, what their routines are).”

Since 2001, at least 40 human rights workers of Karapatan have been killed.

It doesn’t help that the President himself have threatened human rights workers in the past.

(One of these days, I will investigate you human rights, conspiracy. Tell them, ‘Police, shoot those who are part of it’ so they can see the kinds of human rights. I’m mad at you; you don’t look at what you’re getting into, all about human rights.) 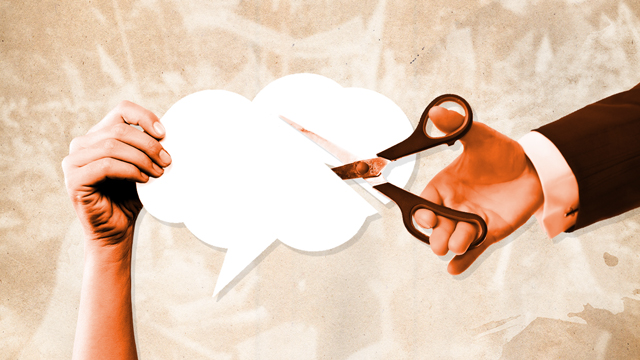 The cloak of secrecy surrounding state surveillance and how it is done in the Philippines makes it hard to fully realize how capable the government is in monitoring individuals and groups. This makes it difficult to hold accountable state agents who violate the right to privacy.

Santos recalled there were several times during formal gatherings or national conferences where they tried to confront state agents about surveillance. They, however, always refuse to admit or deny they engage in this act.

The lack of accountability mechanism, according to Jacob, makes the whole system of state surveillance prone to abuse. It can even lead to others – such as journalists, students, and any individual or groups seen as “destabilizer” by the government – to being monitored.

“So if it is necessary, to some extent yes but is it prone to abuse? Yes, also, especially if it continues to operate the way it is,” he explained. “It’s okay if it’s used to monitor legitimate internal threats to the state, but not individuals or groups who voice out valid criticism.”

“It should not be free rein, like without at all mechanisms to keep things in check,” Jacob added.

Then what can be done?

According to the Commission on Human Rights, individuals who feel like they are placed under state surveillance can avail of their help.

Mandated by the Constitution to investigate alleged human rights violations by the state, it can issue subpoenas on state agents who can in turn produce documents that can help their case buildups.

(We can find out if the surveillance operation on a person or group is lawful. Are they armed with a mission order? Maybe that’s only intimidation? Is it legitimate? Lawful? Is there any basis?)

But the fact still stands that conducting state surveillance on a person without probable cause or “verified information” is tantamount to violating his or her rights.

“If there’s no probable cause or certain specific or verified information you’re engaging in any unlawful activity, the conduct of state surveillance is unlawful or arbitrary,” CHR lawyer Arlene Ven said.

Another remedy that can be invoked is the writ of habeas data . A petition for this writ, a remedy against “gathering, collecting or storing of data or information” through surveillance, can be filed before a regional trial court.

Jacob, however, warns that securing this writ can be very hard.

While legal remedies is always on the table, human rights organizations often resort to more safety protocols in line with the continuous threats and state surveillance.

Karapatan, example, ramped up their physical and digital security through trainings. Sweeps for any bug or listening device in their office are conducted more frequently, and they’ve worked out ways to protect the data they use for work.

Going through the principle of strength and security in numbers, between 50-100 people join the group’s fact-finding missions – especially in militarized areas in the Philippines.

But despite the danger heightened by the administration’s continuous threats, human rights organizations say they will not stop doing their job in depending the rights of marginalized communities under what critics call a “repressive” regime.

But in a country where democracy is reportedly backsliding, it might only be a matter of time before state surveillance starts targeting ordinary citizens. – Rappler.com