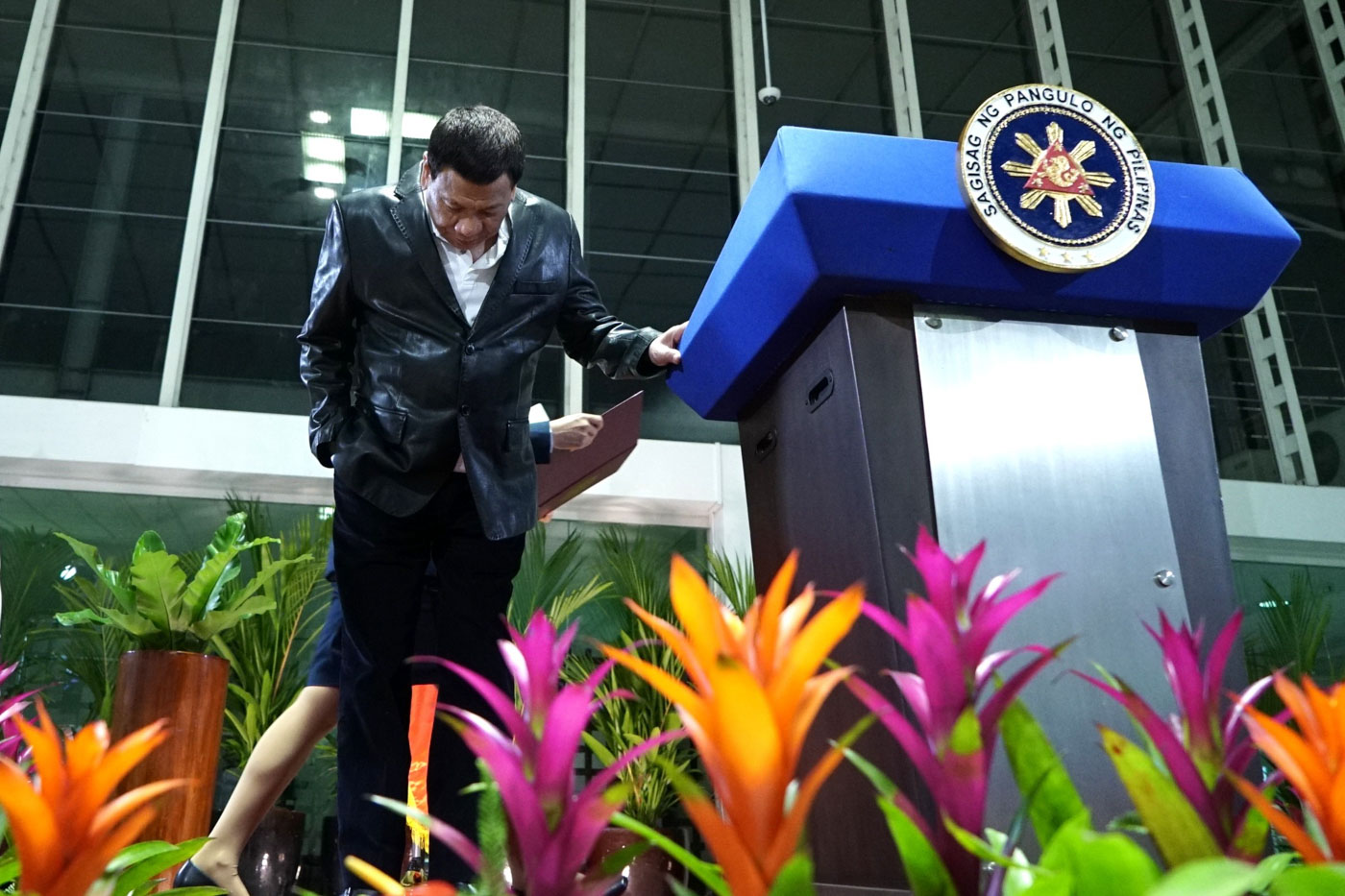 MANILA, Philippines – President Rodrigo Duterte has said, time and again, that even “one whiff of corruption” is enough for him to fire or sanction an official.

But a list compiled by Rappler shows presidential or government actions that appear to contradict this “zero tolerance” for corruption.

Sixteen officials who have been accused of corruption or abuse of public funds were reappointed, retained in another capacity, or promoted within the Duterte government.

Corruption allegations against some of these officials came from Duterte himself. In some cases, it was other government officials – such as lawmakers or the Office of the Ombudsman – who made the allegations, whether based on information from resource persons or an investigation.

It seems the President has had no problem overlooking these accusations, even if some of them were made by offices like the Philippine Drug Enforcement Agency, which he had trusted enough to put them in charge of his campaign against illegal drugs.

Does he simply not believe in the allegations made by other government entities or branches? This too appears to contradict another declaration of his – that an accusation does not even need to be true for him to fire someone.

“The first whiff – and even if it isn’t true – we’ll say goodbye,” he had said back in April 2017. (READ: When President Duterte goes on a firing spree)

All of the persons in the list have vehemently denied the corruption allegations. Some resigned from their posts after the accusations surfaced but were then reappointed by Duterte.

Melissa Aradanas – She was among the 5 Presidential Commission for the Urban Poor (PCUP) officials sacked by Duterte for supposed excessive travels and failure to meet regularly as a collegial body. She has been reappointed deputy commissioner for the Housing and Urban Development Coordinating Council. She also happens to be the cousin of Duterte’sl longtime partner, Honeylet Avanceña.

Joan Lagunda – Another of the sacked PCUP commissioners, she is now environment assistant secretary. She was appointed in April 2018.

Manuel Serra Jr – The 3rd sacked PCUP commissioner to be reappointed, Serra is now a member of the Philippine Coconut Authority’s governing board.

Nicanor Faeldon – The former Bureau of Customs chief has been appointed deputy administrator III of the Office of Civil Defense. This, despite being accused by the Philippine Drug Enforcement Agency (PDEA) of involvement in the P6.4-billion shabu smuggling controversy. The PDEA’s complaint was eventually dismissed by the Department of Justice but the Ombudsman recommended further investigation against him.

Vincent Maronilla – He resigned from his post as Manila International Container Port district collector after a Senate hearing where broker Mark Taguba named him as among the Customs officials who accepts “tara” or grease money. Senator Panfilo Lacson also included Maronilla’s name in his “tara” list – what he claimed to be a carefully vetted and cross-matched list of names of officials who accept bribes from “players”. Maronilla was also among those accused by PDEA of conspiring to import illegal drugs and protecting drug traffickers in a complaint filed with the Department of Justice. Despite these, Duterte appointed him assistant commissioner at the BOC.

Milo Maestrecampo – Maestrecampo resigned as Bureau of Customs Import Assessment Services Director after he, too, was accused of accepting bribes and conspiring with drug traffickers. He was the subject of the same PDEA complaint against Maronilla and Faeldon. He, too, was named by broker Taguba as a Customs official accepting bribes. Duterte has appointed him assistant director general of the Civil Aviation Authority of the Philippines, an agency under the Department of Transportation (DOTr).

Gerardo Gambala – He resigned as Customs deputy commissioner and was appointed director of the DOTr’s Office of Transportation Security. He was included in Senator Lacson’s list of supposedly corrupt Customs officials.

Teddy Raval – Appointed director of the Enforcement and Security Service of the Bureau of Customs during the previous administration, Raval figured in Lacson’s list of supposedly dirty Customs officials. This didn’t stop Duterte from reappointing him as a Customs deputy commissioner.

Celestina de la Serna – Duterte fired her from her post as Philippine Health Insurance Corporation officer-in-charge due to her pricey and unnecessary hotel stays and excessive travel expenses. It was also under her watch when PhilHealth suffered a P9-billion net income loss.Yet Duterte decided to retain her in PhilHealth’s board of directors.

(We are including them here as Duterte is the commander-in-chief of the country’s security forces and because he had warned that all personnel abusing their authority would face consequences.)

Roberto Fajardo – Fajardo was the police general supervising Caloocan cops as Northern Police District chief during the killing of teenager Kian delos Santos. He infamously remarked that Delos Santos was being made to look more innocent than he actually was because of politics. He was suspended to prevent him from influencing the probe on the teen’s death. Duterte had also vowed that police responsible for Delos Santos’ death would go to jail. But almost a year later, in June this year, Fajardo was appointed chief of the PNP’s Highway Patrol Group.

Marvin Marcos – He was the chief of the Criminal Investigation and Detection Group Region 8 when it tried to serve a search warrant on Albuera Mayor Rolando Espinosa Sr inside his jail cell in Baybay City, Leyte. But the raid led to Espinosa’s death. The police involved claimed they opened fire because Espinosa “fought back.” But the National Bureau of Investigation concluded it was a rubout. Marcos and his men were relieved from their posts pending investigation and were sued for murder. Later on, the case was downgraded to homicide. Administratively, Marcos and his men faced suspension, yet Duterte himself publicly ordered Marcos’ reinstatement, claiming he wasn’t part of the raiding team anyway. Marcos told a Senate panel in November that he was outside the Leyte cell when the search warrant was served.

Chito Bersaluna – He was chief of the Caloocan police that conducted the city-wide raid that led to the killing of Kian delos Santos. He was suspended so as not to influence the probe, but almost a year after was named chief of the PNP’s Bulacan Provincial Police Office. He had also admitted in a Senate hearing that Caloocan police under him “confirmed” Delos Santos’ drug involvement through social media, aside from evidence obtained after the killing.

Athelo Ybañez – He was promoted from commodore to Rear Admiral by Duterte despite being a subject of an ongoing investigation by the Office of the Ombudsman over P27 million worth of cash advances which were found to have been disbursed irregularly.

Teotimo Borja Jr – He, too, is a subject in the Office of the Ombudsman’s investigation into the misuse of over P27 million of public funds. He was promoted from the rank of captain to Commodore.