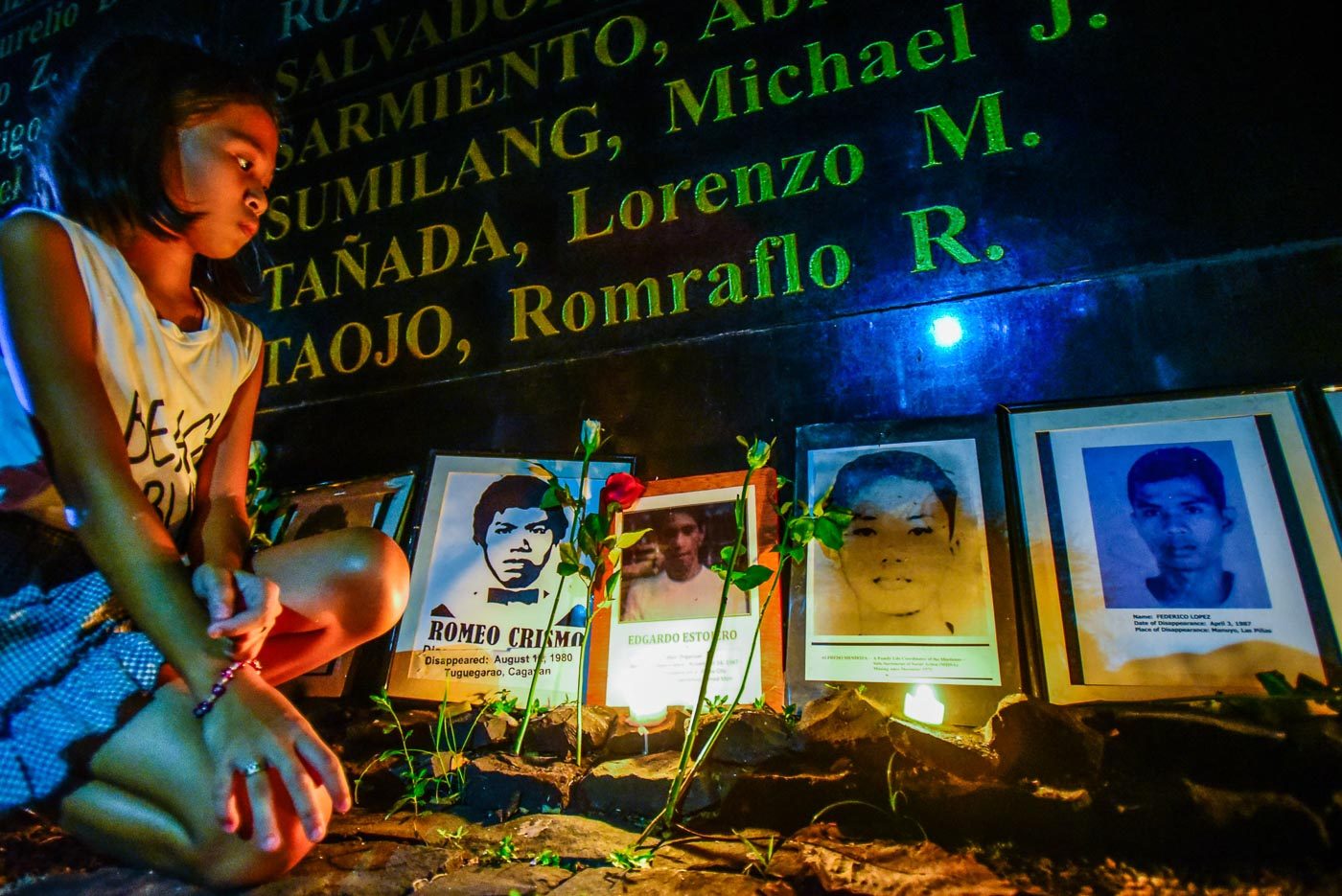 JUSTICE. Families of victims of enforced disappearances call for justice for their loved ones.

Facebook Twitter Copy URL
Copied
Hailed as comprehensive by advocates, the Anti-Enforced Or Involuntary Disappearance Act of 2012 still faces several challenges, including lack of funding and overall improper grasp of the concept of human rights

MANILA, Philippines – When the Anti-Enforced Or Involuntary Disappearance Act of 2012 was signed into law, advocates saw it as a ray of hope for victims and their families.

Republic Act 10353 – the first of its kind in Asia – was the culmination of at least 16 years of lobbying for a semblance of justice and state accountability for the desaparecidos or the nearly 2,000 victims of enforced disappearances since the Marcos regime.

“There was hope that when the law was passed, all other families will no longer suffer the same harrowing experience we had, the same pain and anxiety that we endured,” said Nilda Sevilla, co-chairperson of Families of Victims of Involuntary Disappearances (FIND).

“So hindi na nga maibalik ang disappeared (you cannot bring back the disappeared but), at least we can prevent other families from becoming victims of enforced disappearance,” she added.

The sad reality, however, is that the landmark law has yet to be fully implemented due to lack of funding and an overall improper grasp of the concept of human rights. It fell into the old adage that the law is only good as its implementation.

Under Republic Act 10353, an enforced involuntary disappearance does not only refer to the deprivation of liberty of a person by a state agent or upon state approval. What is also crucial is that there is a conscious effort to conceal information about the victim’s whereabouts.

It, after all, has a “continuing element” compared to kidnapping, serious illegal detention, and/or murder, making it “not only an ordinary crime but also a human rights violation.”

So far, no one has been meted life imprisonment, the maximum punishment under the law. Cases seldom progress.

Sevilla points out that the lack of understanding of the law as human rights legislation hinders its proper implementation.

(How can you really bring the perpetrators to court if in the first stage, they will say there’s no probable cause just because they are not aware of the nuances or character or nature of an enforced disappearance?)

Aside from pursuing their own cases, families also work with the Commission on Human Rights (CHR). Among all the agencies tapped as implementors of the law, the commission is responsible for the investigation of enforced disappearance cases.

The CHR is mandated to “determine when an enforced disappearance has transpired and builds the case for filing in appropriate courts,” according to CHR Spokesperson Jacqueline de Guia.

Since 2009, the CHR has taken cognizance of a total of 84 cases of enforced disappearance – a far cry from the 1,996 cases documented by FIND.

RA 10353 is clear that it’s more than its penalizing clause – it lays out important provisions to address the problems that victims and their families face. (READ: The battle’s not over for mother of desaparecidos)

In February 2014, the CHR signed a Memorandum of Agreement (MOA) with several government agencies to formalize the giving of monetary compensation, rehabilitation, and restitution of honor and reputation to victims and their families. The other signatories are the Department of the Interior and Local Government, the Department of National Defense, and the Department of Justice.

Sevilla said there has been a lack of funds in recent years, another hindrance to the proper implementation of the law.

(The law is good but it’s not implemented properly because there is no funding. There was funding at the start but it hasn’t been sustained.)

There is no doubt that the law and its provisions are needed considering the Philippines’ long history of enforced disappearances.

According to latest data from FIND, there are at least 1,996 documented cases since the administration of the late strongman Ferdinand Marcos. Out of this number, 1,165 remain missing, 587 surfaced alive, and 244 were found dead.

The victims were usually activists, farmers, and those involved in the labor union struggle, among others – people regarded as “political dissenters.”

But in recent years, FIND noticed that the victims now include people not affiliated with any organization. In fact, most came from the poorest communities.

In the more than two years of the Duterte presidency, FIND has documented at least 23 victims, most of their cases alleged to be drug-related.

(There seems to be a new wave of disappearances that are no longer politically-motivated. This new phenomenon now includes ordinary citizens, poor citizens, people who are apolitical. Most are drug users.)

What is unfortunate is that it has become harder to document the cases, much more pursue them. This is mostly rooted in the lack of understanding of an enforced disappearance and also the prevailing climate of fear.

According to Sevilla, the deadly combination of a repressive regime and the climate of fear stop families from reporting that their loved ones are missing. Many even refuse to serve as witnesses.

“Nahihirapan talaga (They’re really having a hard time) because the family members, as well as witnesses, they are afraid to speak up, to testify, or to identify the abductors because of the climate of fear,” she said.

Families of victims and advocates are also urging the Philippine government to “ratify or directly accede” to the International Convention for the Protection of All Persons from Enforced Disappearance.

This convention is a United Nations (UN) instrument that explicitly states there is no situation or circumstances that justify the forced disappearance of a person. It entered into force in December 2010 and has been ratified by 58 countries so far.

Once the Philippines ratifies it, CHR Spokesperson De Guia said “this individual right is rooted on a legal standard that is not dependent on political dynamics of government, change of leadership or policies.”

Sevilla, meanwhile, said that being a party-state to the treaty will give families other options to report their cases and incidents of enforced disappearances. It can go hand-in-hand with RA 10353.

“They are complementary so we can make better use of UN procedures and mechanisms. The national law is binding dito lang sa Pilipinas unlike the treaty that covers all states, they have an obligation to help each other,” Sevilla said.

What has kept the government from ratifying it? Sevilla thinks it’s because it is “afraid of scrutiny.”

(They’re afraid to report to the treaty bodies because it’s a requirement and they will really be scrunitized. If there is poor implementation and compliance with the standards under the treaty, they will get embarrassed.)

Given the Duterte administration’s aversion to international mechanisms of accountability, especially with respect to human rights, the possibility of the ratification might be far-fetched for now.

The families, Sevilla said, will not falter in their struggle. They are not only doing this for themselves but also to prevent more enforced disappearances. – Rappler.com